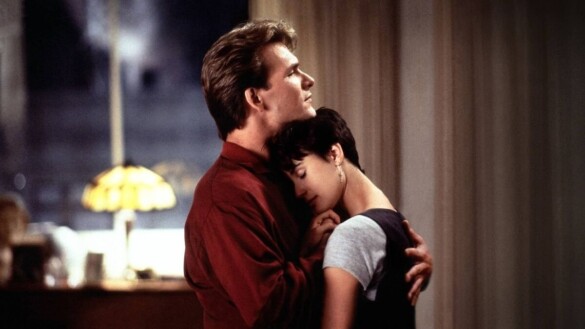 Ghost (1990) is an almost unforgivably sappy film but its biggest sin is that it is unable to commit to being a cheesy melodrama about dumb attractive people with ridiculous names. Almost everybody is aware of the film’s central conceit but they probably won’t realize that much of the film is taken up by scenes in which the titular ghost learns how to fight. It is fondly remembered as a classic chick flick but it keeps pushing back against the genre that it fits into.

Ghost’s admirers are generally hung up on the swoony love affair between Sam Wheat (Patrick Swayze) and Molly Jensen (Demi Moore). They are both young, dreamy, and prone to getting all dewy when they are in each other’s presence. Jensen’s life is destroyed when Wheat is shot by a robber who had been hired by Carl Bruner (Tony Goldwyn), his corrupt colleague. Jensen is unaware of the fact that Bruner was responsible for the murder and finds it impossible to move on from her lover’s untimely death. Wheat becomes a ghost and decides that he needs to murder Bruner and reconnect with his girlfriend. He comes into contact with faux-psychic Oda Mae Brown (Whoopi Goldberg) and uses her to get closer to his girlfriend. He becomes powerful enough to defeat Bruner, but has to ascend to Heaven after working through his unfinished business.

This is one of those films that never quite comes together. You’ve got a revenge-based supernatural subplot, a romantic melodrama subplot and plenty of scenes in which Goldberg is allowed to shamelessly overact. Characters from the different subplots will interact with one another but, from scene to scene, it feels like you’re seeing three different films that have been awkwardly cut together. The screenplay wants to be all things to all people and it winds up failing in all regards. It’s too intent on being gritty to get away with being endearingly mushy and Goldberg’s shtick is too irritating to make the comedic scenes tolerable. In a well-written, well performed piece of drama, there would be delicate transitions between the different plot strands and multiple different tones would be successfully juggled. Ghost is the prime example of what happens when everything goes horribly wrong. Instead of being a romance with occasional dashes of slapstick, it’s an unmitigated disaster.

On a macro level it fails but, in considering the film from a technical standpoint, I came to appreciate some of its minor virtues. If you look closely, you will notice that Jerry Zucker makes a real effort to build up Wheat’s apartment as a lived in, semi-believable location. It’s the sort of airy, well lit loft that every twenty-something artist would just love to live in. Zucker seems to understand that this sort of big budget romantic drama is meant to serve as a fantasy fulfilment for most of the people in the audience and he doesn’t try to give Jensen the sort of lifestyle that most poor young women would love to have. You get plenty of shots of Moore walking around her spacious living room or poring over the artwork that she has created and I found myself salivating over the Nancy Meyers-esque production design. When considered as a piece of wealth porn, it’s difficult to argue that it doesn’t do the trick.

This is the sort of sleek, well produced adult entertainment that I wish was still being made. I like the idea of a very serious romantic drama about a ghost trying to remain close to his widowed girlfriend – I just wish that the execution were a little less sloppy. Ghost is proof of the fact that good writing still matters. No matter how fashionable it looks, the film is horribly outdated and unable to come through with the goods. No amount of fancy set dressing can make up for a poorly plotted, bizarrely paced story. I know that AFI voters love to recognize popular hits but I think they could have left this one alone. I don’t know anybody who is all that passionate about it.