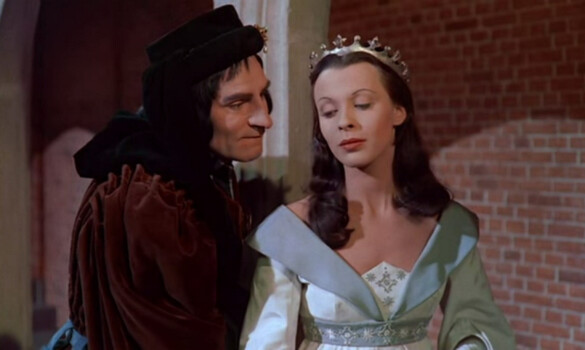 Let’s “between you and I” combine our classic film studies and Shakespearean analysis in this chronological quartet of mid-century escapades in Bard. “The game’s afoot!”

Rightly or wrongly; egotistical writer, director, producer, and star Orson Welles puts his all into this black and white, fast moving, simplified yet heavy hour and a half. Haunting funerary, chanting, sacrificial crosses, and medieval hoods set the somber mood. However, distant outdoor filming, big battle action, and artistic scene setters also try too hard amid narrations, head hopping, and messy structuring thanks to the embattled, long gestating production. Intercut up close shots feel spliced together, and by opening with the play’s fatal ending, no one is actually introduced. The dialogue sans subtitles is quite difficult and confusing for audiences unfamiliar with this riveting tragedy. Iago’s opportunistic machinations are lost amid mustache twisting villainy and uneven photography designed to accent Welles’ eponymous confrontations. Welle’s scenes as Othello are the best because he makes them so with slower, careful angles capturing his booming ogre and kindly misunderstood. If Welles could have done Othello as a one man show he probably would have. Naturally a white star playing the traditionally black Moor is controversial and Welles does so wearing inappropriate, swarthy makeup. The full of itself presentation overshadows the intriguing, noir yet avant garde vision. Thankfully, for all the behind the scenes troubles and varying, imperfect versions, this is a powerful ode nonetheless.

Producer, director, writer, and star Laurence Olivier assembles an excellent ensemble featuring Ralph Richardson (The Heiress), Claire Bloom (Limelight), and John Gielgud (Arthur) to prove just how pleasantly effortless Shakespearean dialogue can be in this condensed but still two and a half hours plus rendition; opening with rousing music and medieval scrolls detailing who is Lancaster and who is York. Numerous characters are excised and the complicated ploys may require some background knowledge, but our unreliable brother keeps us in the know with his crocodile tears, marital deception, and multifaceted orchestration. Richard gives his famed soliloquy directly to the camera with witty asides intruding on the family squabbles. He’s up to no good as the jealous audience anchor cheated by his half a man veneer, and well done over the shoulder camerawork and tracking shots across the whispering court match this fly on the wall perspective. Olivier was also ahead of our new normal in releasing Richard III both in theaters and on television simultaneously, which ironically led to box office failure. Interior filming may also seem congested mixing live horses, fake snow, and stage facades – there are even few ugly Burger King crowns. However, the Technicolor costumes and regalia look VistaVision fresh before the court increasingly darkens under Richard’s rule. Eerie night before the battle dreams lead to just desserts in a self-aware Bosworth topper that remains despicable yet enjoyable.

Orson Welles’ adapts Henry IV Parts 1 and 2, Richard II, Henry V, and The Merry Wives of Windsor to craft this turbulent, once obscure 1965 Falstaff opus. Of course, in clarifying Falstaff’s arc across The Bard, this compact focus has little time for anything else. Welles’ self indulgent, larger than life portrayal fills the screen – windblown and over the top while the distorted angles and grand castle arches make other men small. Sunlit rays and strategic lighting schemes grace Henry IV as Prince Hal awaits and challengers remain shadowed. Although the Criterion blu-ray is a restored black and white crisp, the editing is often messy with quick, unnecessary cuts. Fortunately, handheld pacing accents the maces, violence, and mud in the lengthy Shrewsbury battle; surreal fog and superb music set off the impressively modern action. Falstaff entertains Prince Hal with his own court at Boar’s Head, protecting him with booming embellishments despite knowing the joke will be on him once Hal takes up the heavy crown. Past his prime Falstaff is a lot like us. He’s loyal yet cast aside, making himself out to be something else, and clinging to his young well connected friends – just like social media today. This is not an introductory piece and purists may dislike the divisive rearrangement, but Welles’ heartbreaking story should be seen at least once for this personal, bridesmaid perspective.

Director Franco Zeffirelli’s (The Taming of the Shrew) splendid 1968 British-Italian adaptation of Shakespeare’s star-crossed lovers remains a delicious medieval potboiler as sword fights and marketplace quarrels introduce the rival houses and feuding threats. Intimate, up close asides pause upon the fourth wall as the masked ball titillation invokes period, effortless Bard to match the melancholy “What is a Youth” music and award winning costumes. Though both paired down yet overlong at two hours plus, firelight patinas and authentic cobblestones establish the Verona mood before familiar balcony laments and whirlwind hopes that love will cure all. Despite knowing of the preventable daggers and poisonous mistakes, we root for the ill-fated romance from start to finish thanks to the beautiful performance from Olivia Hussey (Black Christmas). Initially shy, Juliet chooses Romeo and quickly learns how fast sweet sin blossoms. It’s easy to be swept up in their happiness but call me crazy, I have always preferred Michael York (Logan’s Run) as Tybalt, for Leonard Whiting’s (Frankenstein: The True Story) flaky Romeo gets by on good looks and bad poetry before true love matures him overnight. The couple’s brief nudity is a moment of unashamed bliss – the “little death” of the marital bed followed too soon by their dying kiss as night weddings and day funerals become one and the same in this excellent sixties meets Shakespeare loss of innocence.