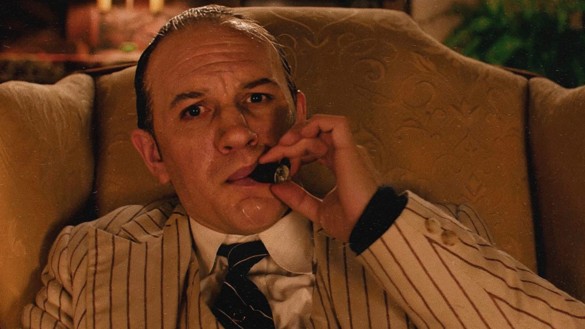 “There’s nothing anybody could tell me about this movie that would make me feel any less of the amount of love that I have for it.” Josh Trank on Capone.

I will open this piece with a confession, I actually like Capone quite a bit. And, I admire Josh Trank for making such a divisive and personal film which isn’t perfect, but is it’s own way a flawed masterpiece of therapeutic filmmaking. For a whole, I was put off from watching Capone after reading the reviews. The reviews were pretty bad as critics literally tripped over themselves to dish out the best insults, Johnny Oleksinski of The New York Post described the film as a “ham dinner”, Joe Morgenstern of The Wall Street Journal went a bit further stating the following in his review “What a waste, and what a downer for Mr. Trank.” and Richard Roeper from the Chicago Sun-Times really let it rip, “”Capone” is a noxious film about a noxious man – a gruesome and grotesque viewing experience.”

Personally speaking, I haven’t seen this much vicious energy from film critics since the release of Cats last year, there’s nothing like a ‘bad movie’ to unite film critics and it becomes this weird gladiator battle to see who can hurl out the best insult. There’s an art to film criticism and the craftsmanship of writing a negative review. To write a negative review, one has to embrace their dark side. You have to let that frustration, cynicism and rage just flow out of you.

However, there’s a thin line between offering helpful, fairly structured criticism and just being plain mean for the sake of it. In my own experience, writing a negative review takes a lot out of me. I never like to insult the filmmakers, actors or anyone else involved in the picture because that seems petty and it seems unprofessional. I know in the past I have been less than complimentary about certain films but I am working on bettering myself as a film critic. To simply describe a film as “trash” or “garbage” (both ugly ways of describing something that an entire film crew have invested time and effort in creating) without giving any evidence to back up your statement, is just lazy writing. As critics, we all need to stop with the childish ‘Click-baiting’ and actually get back to providing real criticism.

Anyone who has studied film production or made their own film will be the first to tell you that filmmaking isn’t an easy task to undertake, and perhaps this is something that certain film critics overlook. There are a lot of other determining factors that can influence the production of a film which aren’t really discussed or taken into account when the final piece is revealed to the world. We only have to look at Trank’s previous film Fantastic Four to see how studio meddling affected the overall result of the film. We also have to take into account that the director is only human. We view the ‘Director’ as this almighty almost God-Like being who is meant to become stoic and detached from their emotions.

However, when we take into account how quickly Trank’s popularity and reputation had occurred, and how he was suddenly responsible for a major motion picture, is it any wonder he snapped under the pressure? Ask yourself truthfully, just how well would you be able to cope in his situation? Trank burst onto the scene with 2012’s Chronicle, a film that was a mash-up of two popular crazes in the form of the ‘Superhero’ film and the ‘found footage’ movie. The film earned $126 million globally, which was more than 10 times its production budget. He was just 27 at the time and people were instantly hailing him as a new revolutionary and visionary filmmaker. Chronicle opened all kinds of doors up for the young director, and it led him to becoming the director of the new Fantastic Four reboot.

Much has been written about in terms of all the drama and controversy that surrounded Fantastic Four’s production. How much of that drama was actually caused by Trank is left up for debate, (remember, that not everything you read in the news is exactly the ‘truth’, studios will often exaggerate as part of damage control). Regardless of the facts, there’s no use denying that the disaster that was Fantastic Four seriously damaged Trank’s career. However, in an interview with The New York Times, Trank confessed that he was “so glad that I did ‘Fantastic Four,’ and I’m so glad that it turned out to be a disaster because I learned so much about myself.” I think we can all take away something here from Trank’s attitude, one bad decision shouldn’t control the rest of your life. We can all grow from our mistakes.

Capone is the result of Trank’s growth not only as a filmmaker but as a person. I think it’s a very interesting decision by Trank to focus on the last year of Al Capone (played by Tom Hardy). Not many filmmakers would have made this decision, and if Trank wanted to get back into the good books of the paying customer and the critics alike, surely he would have opted to focus on Capone’s glory days? But, where would be the challenge in that? There’s been numerous films over the years about the infamous gangster, but Trank’s Capone isn’t about ‘Al Capone the gangster’, it’s about ‘Al Capone the human’. He’s an embodiment of all of humanity’s weaknesses and flaws, and a broken shell of his former self. Capone serves as a warning to all of us of what can occur if we don’t address our weaknesses. Perhaps, this version of Capone is how Trank envisioned himself if he remained within that toxic world of studio filmmaking? An empty shell of a man scrubbed of his individuality?

My personal reading of the film is that I see it as a way for Trank to process what took place over the years of his rise and fall. Capone, like Trank, became notorious for all the wrong reasons, he became the stuff of legend and people placed huge expectations on him to behave and act a certain way. Capone was not a good man, he’s not someone we should idolise or pity, but he was human. And, in Capone we see how human he actually is. It’s a depiction of how a person becomes imprisoned by their mind and trapped in their body. Capone literally loses control of his own individuality, perhaps this is how Trank felt dealing with 20th Century Fox?

Trank Has been very honest about issues in his own personal life and how his depression after Fantastic Four led him to writing Capone. And, I think it’s this infusion between the personal life of Trank and the decision to focus on this stage of the gangster’s life that makes Capone such a fascinating film to analyse and examine. Yes, Capone isn’t an easy watch. It’s a dark, and very alienating film at times, with truly off putting grotesque scenes where Hardy shits himself and sits in a chair drooling. But all of this is deliberately designed to evoke an emotional response from the viewer, we’re not meant to lose ourselves in this film, we’re meant to see this as just pure entertainment. Capone isn’t really for us, but designed to bring Trank closure and I sincerely hoped that it did.

Personally speaking, I hope Trank continues to make films just as experimental and divisive as Capone. It’s refreshing to see a film that doesn’t simply exist to make a studio a hefty profit, but is there to be a form of expression for the director. Trank has said that he enjoys a challenge, “There’s one thing about me, I’m not scared of challenges. I love a challenge.” so here’s hoping that he continues to maintain that mindset. The world of filmmaking needs directors like Trank, because we need more variety in our films. I think we can take a lot of things away from Trank’s statement: embrace the challenge.