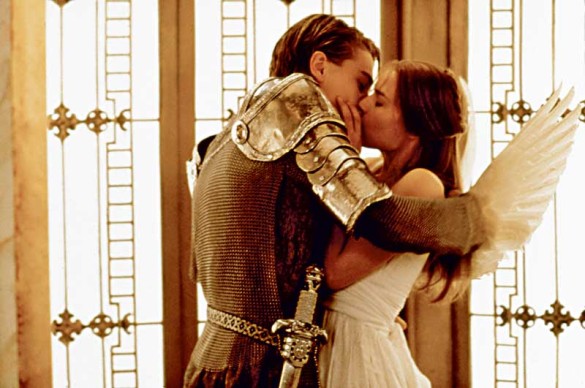 DIRECTION
The way Baz Luhrmann directs Romeo + Juliet is a very unique and is an interesting take on the classic play. I love how he updates the play to make it very modern and easier to understand while keeping the dialect and respecting what has made it a classic. The branding of Swords on the guns was a nice touch and the hip hop vibe also was interesting to drawing me in. It’s like an MTV music video, which was big at the time it was made, and executed in such a way that would draw in the right audience. I do, however, have a hard time getting past some of the Shakespearean dialect, but I like the fact that Lurhmann keeps the core of the play intact here. The performances are good for the most part and he utilizes the music really well as well. For people who have a hard time with the subject material or classical plays, I think this version will help get the story across well. It’s funny and weird, but it draws you in, whether you like it or hate it. It has some…well lets say flamboyant personalities and colors at times and is it’s own unique flavor of film. Kudos to Luhrmann for doing something different and being bold about it.

SCRIPT
The story by Shakespeare is one of the most revered and used plays of all-time, and for good reason. Craig Pearce’s screenplay is a great tribute to the classical play that includes most of the great dialect and most famous scenes. They do cut out some of the play to cut down on time, but I don’t think it takes away from the film at all. I fall in love with this story and the characters and it’s executed well here in terms of the script. I think Luhrmann’s direction makes it easier to understand and the modernness of this version makes it fun.

PERFORMANCES
DiCaprio is amazing in this film. What he does with Romeo is exactly what I’d be looking for out of this character. He brings the right emotion out of the character and draws that emotion of you as well. Claire Danes is good, but like most of the characters in the film, I don’t think she understands what she’s saying most of the time. At times it feels fake and just read straight from the script. She does bring great emotion and heart to the character though, which is what I fell in love with in her Juliet. The rest of the supporting cast is hit or miss. I love Harold Perrineau, although his take on Mercutio was perhaps different than I’d think. Overall, I didn’t have a problem with the performances and I loved the leads, which is what matters most. The ending was amazing and incredibly sad and tragic.

SCORE
Nellee Hooper’s score is pretty good and adds value to the film. It’s what you’d expect from a film like this, but again, with an updated vibe that makes this version more modern. I especially loved the intense moments in this film as the score does a really good job of amping up the film in those moments.