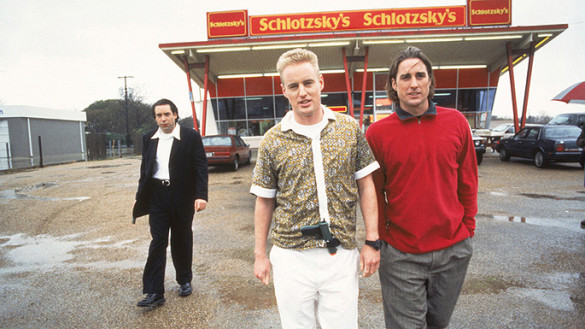 Synopsis: Focusing on a trio of friends and their elaborate plan to pull off a simple robbery and go on the run.

DIRECTION
The first thing you’ll notice about Wes Anderson’s Bottle Rocket, is that it’s very simple, especially for Anderson. This is Anderson’s first film, with a low-budget, and you could tell that’s how he was operating. So while you don’t really see Anderson’s signature style here, the one thing that does bring it back to him are his zany and goofy characters, which was funny and compelling. His camerawork, while simple, was still effective and his musical choices are still within the vein of his style. For a debut film, Anderson does a more than fine job here.

SCRIPT
The story is centered around Anthony Adams (Luke Wilson) and his best friend Dignan (Owen Wilson), who are both a little crazy and may not all be there. The opening scene shows Anthony “breaking” out of a voluntary mental hospital in a plan set up by Dignan who was hiding in a nearby bush. The scene sets the tone and shows how fun and goofy these guys are but also how the kind story were about to get into. We see Dignan and Anthony join up with their friend Bob, who becomes their getaway driver when they decide to become a heist team. The dynamics of these characters in that setting are hilarious and captivating and easily the bright spot of the film. When we see our team stop at this hotel, we see Anthony start to fall for one of the maids there and this love subplot is a little forced and falls flat mostly. There are some interesting moments in the middle of it, but the believability factor is low. And unfortunately, a lot of time is spent at this hotel and is a little mundane. The third act is brilliant though, exploring the closeness of relationships, why brother relationships are important and that making the right decisions always creates the right atmosphere.

PERFORMANCES
This is more or less the debut performances for the Wilson brothers and they are absolutely wonderful. Luke and Owen, both, elevate the scenes they are in and are lovable as these characters. The dynamics between the two of them, as you could imagine, are some of the best in the film. Robert Musgrave as Bob was also terrific, especially as a character who’s timid and insecure. All of the supporting cast did a great job, especially Lumi Cavazos, who played Inez, Anthony’s love interest.

SCORE
Again, we don’t hear a signature Wes Anderson score but Mark Mothersbaugh’s score is more than servicable here. The soundtrack pieces are more in the wheelhouse of Anderson, which was pretty good overall. However, the score is fine and works for what this film is trying to do.

FINAL THOUGHTS
Overall, Bottle Rocket not only introduced us to Wes Anderson, but also the Wilson brothers and it was a pretty good debut. While some of the middle was a bit muddled, the heist moments were fantastic and it’s a solid watch. You love these characters and the crazy situations they find themselves in. There are many great one-liners you can take away and the final sequence is hysterical. Solid debut film.