Movie Series: Before Sunrise (Before Trilogy) 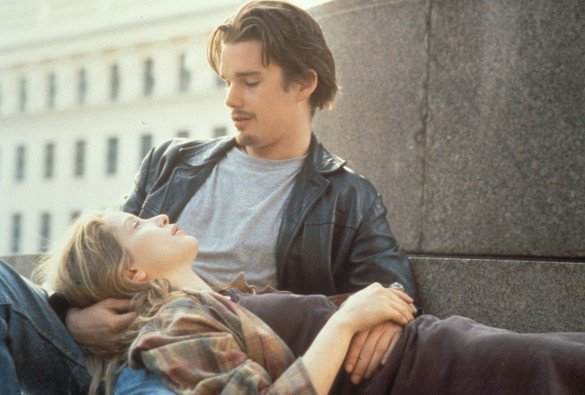 Synopsis: A young man and woman meet on a train in Europe, and wind up spending one romantic evening together in Vienna. Unfortunately, both know that this will probably be their only night together.

DIRECTION
Richard Linklater’s Before Sunrise is executed flawlessly and is amazingly beautiful. The opening scene really sets the tone for who these characters are and what they are looking for while traveling throughout Europe. The movie is filmed so naturally and realism is the carrying stone as Jessie and Celine wonder throughout Vienna hanging out and engaging in some great conversation. Linklater is superb in capturing the Europe aesthetic and the romanticism that you feel between the characters on screen. The restaurant scene is incredibly gorgeous and you have to love how Linklater lets you feel the raw emotions of these characters as they find themselves in pretending to call friends back home describing how they met each other. Simple visuals, laid back musical tones and incredible performances are the best words to describe the direction here. I love everything about this film and it’s one that both men and women can enjoy as the characters are interesting and the story is real. The naturalism makes it so easy for anyone to engage with this story.

SCRIPT
With any film like this, especially one that only star two people, you need to have a strong script and Linklater brings you one. The dialogue between Jessie and Celine, again, is natural and real which makes it easy for you to follow and puts you right into their shoes. The story is simple as it follows these two characters who spend 24 hours together in Vienna before they must part to go back home. As the day progresses, the romance between the two becomes more passionate and real but at the same time it’s never cheesy or stereotypical by any means. You really get to know these characters well and what they are looking for out of relationship which really ties them together. It’s such a simple script, but it displays the reality of romantic pursuit in a fun, exciting way. And the ending, while a little crushing, is perfectly executed to the theme of the story.

PERFORMANCES
Ethan Hawke and Julie Delpy are incredible in this film. The chemistry they have in palpable and the energy is always flowing between the two of them. You really feel yourself rooting for them and you begin thinking about your own story in relation to them as you watch the story unfold. That’s an amazing testament to the performers, as well as the storytellers, and I was on board from the beginning. Hawke does a great job of making you feel his pain as his character his heart broken from a recent break up so he’s a little skeptical to to jump back into anything but Delpy’s character is too desirable to him. Delpy is also great as she’s trying to convince her counterpart that she just wants to be pursued and loved which makes for an interesting dynamic between the two. Both performances are strong, which is needed as their the only main characters in the film.

SCORE
Fred Frith brings a pretty good score that’s mostly in the background which is where it belongs. You don’t have a strong theme here but what you get are tones and musical elements that add to the conversation and are great transitional layers that keep you engaged into the story. Not a fault to Frith as the music was never meant to be a big part of the story, but what he does here is great for the mix of the film. The added soundtrack elements are also pretty good and fitting as well.