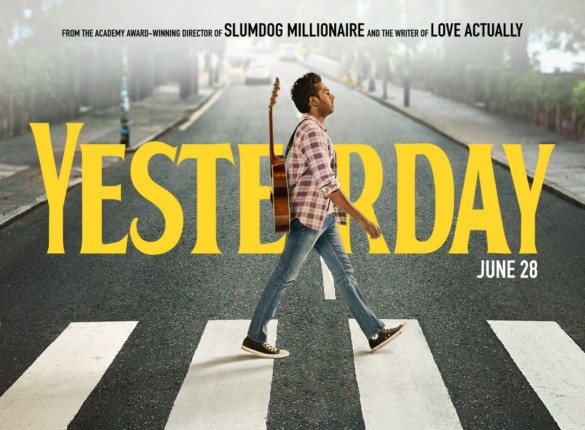 Synopsis: A struggling musician realizes he’s the only person on Earth who can remember The Beatles after waking up in an alternate timeline where they never existed.

The magic of The Beatles is a hard thing to tap into or fully understand. It may be partly natural talent and songwriting ability, partly image, partly timing, maybe none of that or all of it at once. No one can truly comprehend how John, Paul, George and Ringo did what they did in the brief amount of time they worked together. People spend their lives devoted to this music, and The Beatles may have created fan culture as we know it. So, of course, the brave soul of screenwriter Richard Curtis decided to ask a question, one that only stoners late in the evening would ask: “What would the world be like without The Beatles?”

He doesn’t bother to answer it either, as Yesterday is a movie is far more interested in a mediocre romance than anything Beatles related. We follow one Jack Malick (played with wit by Himesh Patel) who’s a struggling musician slumming his way through unpaid bar gigs and other shows. This is no Inside Llewyn Davis though, as the plot comes immediately after a… uh, unexplained incident which presents Jack with a surprising moral quandary. What would you do if you were the only one who remembers The Beatles? No one, not even his manager Ellie (Lily James), who has a crush on him, remembers “Help!”. Jack decides to pass the songs as his, striking up worldwide success. The following events play as a fantasy, as Jack rises through the music industry, churning out boring cover versions of Beatles songs that loses the color in the classics.

Curtis, the mastermind behind this increasingly misguided concept, teams up with director Danny Boyle who lacks the verve here that the central concepts would need. Boyle’s best talent is picking out great scripts, but often times you want to redirect him from his worst visual tendencies. He almost achieves that here by being a basically directing the film with next to no visual ideas. Boyle isn’t to blame here, but Richard Curtis doesn’t engage in what could make this film such fun. Curtis believes that nothing could change the power of a song like “I Saw Her Standing There”, except for the fact that Jack is near 30, and when he sings “Well, she was just seventeen…”, it sure is uncomfortable. Curtis doesn’t realize that the audience for music is far different than it was in 1963. He seems to believe that these poor covers of classics will hold filmwatchers off from asking any number of reasonable questions about the conceit. It’s not hard to suspend disbelief in service of a good film, but it’d be nice to even understand how no one remembers The Beatles.

The actors do try, if you want to throw the film a bone. Himesh Patel is a gifted actor, and his immediate reactions to the lack of The Beatles in the world could lead him to a Golden Globe nomination. His impassioned version of “Yesterday” towards the beginning of the film is the highlight, showing clearly why he was picked for the role. Lily James makes half of her unexplainable character actions reasonable, once again showing why she’s one of the most talented actresses currently working. Kate McKinnon pops up to play a cartoon version of a record label executive, making us question if she’d work out of the context of Saturday Night Live once again. The funniest bit of the film is a short scene in an overextended Ed Sheeran cameo, where we hear his ringtone revealed to be “Shape of You”. If the best part of a film about The Beatles is a lame Ed Sheeran joke, we’ve got problems.

Hear our podcast review on Episode 332: