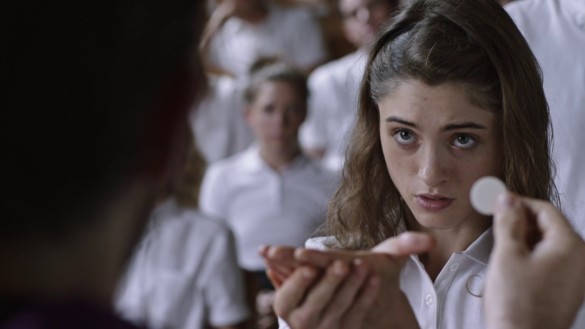 Certain topics are considered taboo, especially in film and TV, and Yes, God Yes manages to tackle one subject in a spectacularly funny, in-your-face way. The film follows Alice (Natalia Dyer), a high school student who feels the stereotypical catholic guilt as she begins to discover herself and her sexuality. The star of the film is Natalia Dyer, who many will recognize as Nancy Wheeler from Stranger Things. She perfectly portrays the awkward, uninformed teen to which many of us can relate. Her performance is what makes this film special, she is one to watch for in both comedic and dramatic roles.

Yes, God, Yes covers a variety of subjects: religious leanings on sex education, high school bullying and gossip, and feelings and thoughts one experiences as one discovers themselves. The movie is set in the early 2000s, so anyone who was in high school or middle school during that time will find much of this movie relatable or funny. Who else remembers getting those “A/S/L?” messages? Choosing to tackle the battle between religion and teenage curiosity as a comedy was a brilliant choice by writer / director Karen Maine. Subjects like female sexuality should be normalized, not considered shameful or taboo, and addressing them in an easy to watch comedy is a great way to start. Though the film covers racy subjects, like masturbation, googling unfamiliar sex acts, and the infamous car scene in Titanic (1997), Yes, God, Yes never felt inappropriate or uncomfortable to watch.

My only criticism about the film is its run time, which is a brisk 78 minutes, resulting in a lack of character development. The focus of the film is clearly Alice, but nothing is revealed about her life before the film starts or why her classmates are spreading weird rumors about her– other than they are teenagers and they are historically known to do that. We aren’t given much information about Alice outside of her struggles between her hormones and her religion. There is also nothing substantial divulged about any of the supporting characters except for small tidbits here and there. Their only purpose is to fuel the guilty and shame Alive feels throughout the movie.

Yes, God, Yes is the hilariously relatable teen comedy you didn’t know you needed in your life. Don’t let the summary scare you away, give this movie a try if only to experience the awesomeness that is Natalia Dyer. Keep an eye on Dyer and director Karen Maine, I expect they will continue to deliver great things to the world of film.