Movie Review: ‘X’ Has Throwback thrills with a Modern Twist 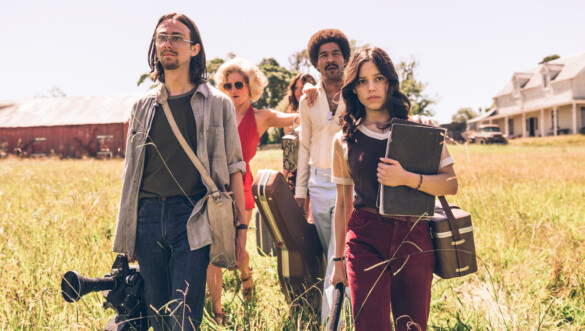 Synopsis: In 1979, a group of young filmmakers set out to make an adult film in rural Texas, but when their reclusive, elderly hosts catch them in the act, the cast find themselves fighting for their lives.

There’s a deep, Hitchcockian sense of dread over the entirety of X. Around every corner, within every darkness, hidden in every copse of trees, there is the imminent threat of danger. There is so much tension that sometimes its resolution is held over until we least suspect it. The film seems to delight in a bit of delayed gratification. Which is ironic, being that the film within a film is pornography.

A psychosexual ballet plays out between the filmmakers attempting to make their movie in secret and the couple whose own sexual proclivities are revealed as the film progresses. There’s even a strange parallel scene between the two dramas. Maxine, (Mia Goth) , is invited into the main house by Pearl, also played by Goth in heavy prosthetics. Whereas in The Farmer’s Daughter, Jackson (Scott Mescudi), is invited into the house by Bobby-Lynne (Brittany Snow). The scenes have the same energy, the same need, that takes shape over a dinner table and shared lemonade. They even have the same tension that at any moment, the old man could return and ruin the intimacy they’ve created.

As the film forms these ideas about sexuality, sex, and the freedom of sexual relationships, there’s a feeling that the tipping point is coming, that the jarring twist toward violence and gore and away from the titilation of tension and T and A. There is a thought, and a conversation within the film, that there could be a switch. Lorraine, (Jenna Ortega) mentions that in Psycho, the film establishes one story and then shockingly pivots toward a different type of film. And while Ti West baits us again, it’s almost a let down that the mayhem that follows is almost exactly as suspected. It’s a slight disappointment that we can’t be caught off guard completely. The eventual kills are gruesome and shocking, but almost banal in their reveal and muddled by subtext becoming text. What is meant to be a jump scare is more of a cringe.

What is arresting about the film is the photography itself. West and frequent collaborator, cinematographer Eliot Rockett make their camera into a deftly moving object. The opening is a static shot of the main house from the barn. As a police cruiser pulls up, the camera pushes in. The walls of the barn fade from the frame and more police cruisers come into view. As the camera moves through the grass we see that it’s a large crime scene. X is filled with these dynamic shots from a POV of a character walking down a hallway to a wide crane shot of Maxine swimming in the water and unknowingly pursued by a crocodile. The photography and the unique blend of throwback style in the editing by West and editor David Kashevaroff give X a really slick look and feel.

The story for X feels like it wants to push boundaries and build something unique out of the vaunted ’70s low budget horror style. It wants to add something to the conversation, presenting these ideas in new ways, though it doesn’t go far enough beyond what it sets out to be, which is a slasher film. The filmmaking is the real star, with Ti West pushing boundaries with his techniques and having a team that creates something truly interesting to look at. It’s even brilliantly scored by Tyler Bates and Chelsea Wolfe who add in female vocalists who make sounds that, depending on the context of the scene, could be ecstasy or agony. Overall, though, X is a satisfying slasher that doesn’t quite make it to the existential levels it shoots for.