Movie Review: ‘Wrath of Man’ Plays Against Type for Ritchie and Statham 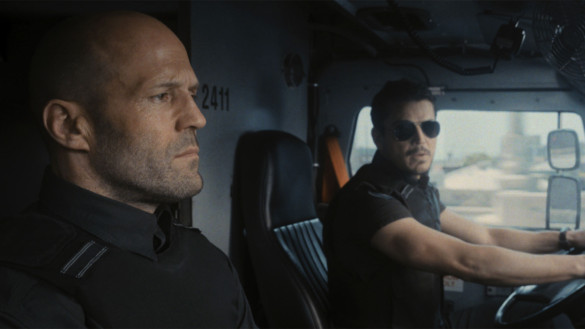 Synopsis: The plot follows H, a cold and mysterious character working at a cash truck company responsible for moving hundreds of millions of dollars around Los Angeles each week.

The term auteur theory is overused in cinema circles and, like most academic ideas, wildly misunderstood. But at its most basic, it is the idea that the director is that author of their films, so one can identify their films via theme or specific aesthetic stylings. Of course, there is a lot of subtlety missing here, such as film being a collaborative medium, but I digress. For years, since Lock, Stock, and Two Smoking Barrels (1998), and whether liked said style or not, Guy Ritchie was a quintessential example. Swept Away and Aladdin aside, you can almost always recognize a Ritchie flick. Crime/heist movies with twists and turns focusing on class structure in England with a quippy, sarcastic anti-hero? Yeah, that’s Ritchie to a tee. It would be easy to walk into his latest film, Wrath of Man with these ideas in your head. In fact, it is difficult not to, especially if you have strong feelings (in either direction) about Ritchie’s previous work.

But I fear that if you have these preexisting ideas, Wrath of Man may rub you the wrong way. Despite the fact that Jason Statham stars (as he often does in Ritchie films), this is not a rehash of Bacon from Lock Stock or Turkish of Snatch fame. Wrath of Man tells a winding tale, which yes, is a Ritchie standby, but this one unfolds in a much more static fashion, using flashback and chapter structure as opposed to whirlwind reveals. It tells the story of H, a new hire at an armored truck security facility who quite obviously has a past that he is hiding. He is needed as two employees were recently killed in an armed robbery. Some might argue that H having a past is a predictable bit (after all, he gets the exact minimum score needed to be hired, a bit of perfection that is a little too noticeable), but I would argue that Ritchie has little to no interest in surprising the audience with new information. For a bloody action movie, the information being communicated to the audience is much more focused on providing next steps than moments of shock.

Statham’s performance is a good one, if a little unexpected. Aside from some mild humor in his introductions to his coworkers, his delivery is cold. It is performed as predatory, not with a wink as in previous roles. And this is not the only restraint on display. Ritchie himself, not exactly known for simplistic, contained camera movement, seems to be aware that this film is not as fast-paced as his other work and the look of the film reflects this change. As he allows the plot to unfold, the visual language of the film also slowly builds up steam. In the first act, essentially a workplace drama (with guns and body armor), we feel the frustration from H and the build of mistrust from his co-workers. But, Wrath of Man is more than Statham, and that is where problems begin to sneak into the frame.

There are two other plotlines, both of which are introduced through flashbacks and brought up to present day, and both are well below the quality of what Statham is giving us. The organized crime plotline, which is usually Ritchie’s standard, rings hollow and uninteresting. It exists purely to prop up the idea of a character, much of which could be accomplished much more quickly. These characters are uninteresting stereotypes. They are not offensive, but they quickly fade into the background. There is definitely not a Bullet Tooth Tony, Brick Top, or Boris the Blade to be found in Wrath of Man.

The second of these plots, as expected, surround the reveal of the original armed robbers who start this drama into motion. Before our awareness, this is based in well-designed action, a definite strength of the film. After all, it opens with this major event and is filmed in such a way that we are not aware of the intricacies of the plan or the deadliness of its results. Within this group of men, their leader, Jackson (Jeffrey Donovan) is the only one doing mildly interesting work. He is not given much to work with, but he is able to portray a sense of honor that can be lacking from this type of role. It certainly doesn’t help that Wrath of Man gives yet another opportunity to Scott Eastwood in a minor role, again coming off as a lump of wood in vaguely human form. His role is small but important, and his lack of charisma and focus makes the final act suffer a great deal.

All that being said, if you’re here for a pure action movie, you likely will not be disappointed. Ritchie usually focused on flair and shock in his action sequences, but not here. A combination of simple but effective choreography and Statham’s cold-blooded demeanor serve to have the desired impact once the film introduces its plotlines. He smartly includes that initial scene of violence, otherwise, a sense of boredom and impatience might set in. But once the action truly begins, it is efficient, bloody, and wildly effective. Wrath of Man is not a typical Guy Ritchie/Jason Statham project, but well worth watching for a fix of cold, effective revenge.