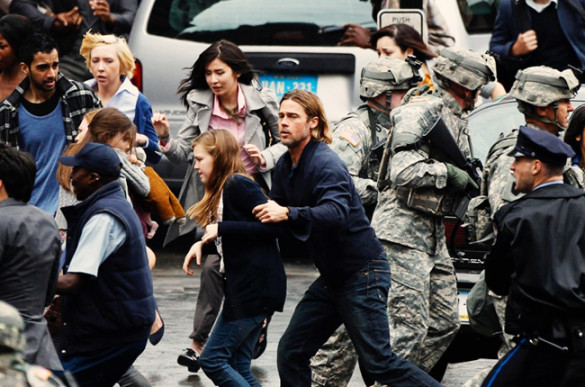 Synopsis: United Nations employee Gerry Lane traverses the world in a race against time to stop the Zombie pandemic that is toppling armies and governments, and threatening to destroy humanity itself.

DIRECTION
This is one of Marc Foster’s best work that brings together good storytelling, action, intensity and good performances. His pace is pretty quick as we find ourselves within the havoc after the first scene. However, it’s the way Foster edits his scenes and pieces it together that works really well. The camera movements deliver many angles of the wreckage while bringing lots of intense moments within them. He uses slow motion to capture memorable moments that are needed to explore the story and piece it together. His zombies are fast and not very bloody which can take away from the movie if that’s what you’re looking for. Foster uses camera tricks to relieve us from the blood and gore but give you the right sense needed to know what’s going on. He uses Marco Beltrami’s score perfectly to make the actions scenes fun and the intense scenes thrilling. He gets great performances out of his actors and uses Brad Pitt magnificently. Foster’s biggest win though is the way he pieces together a really great script. The family dynamics, Pitt going back to find clues and all the action sequences used to tell the story are put together well that’s very engaging. The only knock on Foster is the CGI of the zombies and how they maneuver. The fast-paced zombies drive up the energy of the film, but leaves room for the CGI to seem like…well CGI. Outside of the bad CGI looking zombies, the aesthetic comes across well and is very appropriate for the film. The use of news footage and sound bytes creates a serious feel which helps the story come along really well and creates the World War Z environment you can have fun with.

SCRIPT
The writers came up with really great script that’s a little different for a zombie movie. Fans of the book will have to lay down their expectations and preferences as this is very different than the novel this movie is based off of. The story follows Pitt’s character, who is a former U.N. investigator, and his family is called upon when all chaos is unleashed. The government is wants to use Pitt to get some intelligence to find out how to calm the storm. In the middle of that, you get to know Pitt’s character well, how he thinks and what motivates him. The dialogue is interesting and realistic in a situation that is serious in tone. The use of Pitt’s character is interesting as he’s leading a team trying to find a solution to a crazy problem. As things unfold, foreshadowing becomes important and it’s used appropriately to bring you into the mind of Pitt and what he’s seeing. There’s an airplane sequence about 3/4 through the film that could of been left out and is the only part of the film that is over the top in this environment and brought the film down a little bit. The best part of this script is the third act of the film and how the resolution is pieced together. It’s different and a fresh perspective on a genre that probably needed it. Well done, well done.

PERFORMANCES
Brad Pitt is pretty good here and reminds me of his performance in Spy Game but is in a much different situation. He’s likable and brings a family dynamic that was enjoyable to watch on screen. He brings charisma and intelligence to a character that needs it and it’s easy to follow his logic all the way through. While not as prominent, Mireille Enos, who plays Pitt’s wife, is fabulous and plays off her role extremely well. There’s a lot of supporting cast and several characters come a go as the story moves along and they’re all great. Several of the characters were really fun and engaging which could of lasted longer but in the context of the story it’s what was needed. Overall, great stuff here.

SCORE
Marco Beltrami’s score is excellent for the genre and the environment he’s given to work with. It adds to the intense aesthetic and thrilling moments that this film calls for. It especially great in the third act of the film where the thrills escalate the most and the film peaks in intensity. We even get a fun song by Muse at the end of the film that’s great too.