Movie Review: ‘West Side Story’ is a Loving Remake That Finds Its Own Voice 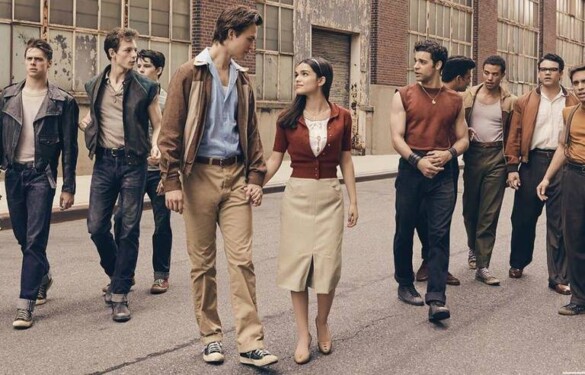 It’s easy to believe Steven Spielberg can do anything. Arguably the world’s most beloved living director, Spielberg has proven, time and time again, that he can tackle any genre, any subject, any style, and make it work. As if his filmography hadn’t already proven the point, in 1993 Spielberg showed the world the true breadth of his skills by delivering not only one of the biggest blockbuster action films of all time, Jurassic Park, but also arguably one of the most masterful dramas of all time, Schindler’s List. For most directors, having made those two films in the span of an entire career would be legendary enough, but Spielberg made Jurassic Park and Schindler’s List IN THE SAME YEAR. One can either feel sorry for all the other directors he has challenged by setting the bar and continuing to elevate it higher, or be excited by what he inspires in his fellow artisans, daring themselves to expand the limits of their visions, comfort zones and capabilities. There is no doubt Steven Spielberg only makes the world of cinema a better place.

The crazy thing is, not only is Spielberg talented, but it seems he is fearless as well. At 74 years of age, Spielberg could easily rest on his laurels, having accomplished nearly everything there is to accomplish in his chosen profession. Instead, he decided to put his entire career on the line by doing two crazy things at the same time: make a musical (which he’s never done) and remake one of the most beloved films of all time. When it was announced that Spielberg would be remaking West Side Story, the 1961 Best Picture Oscar winner, one of only a few films in history that everyone agrees is a masterpiece, some wondered if Spielberg’s lucky streak had finally come to an end. How on earth could anyone do that? Or, more importantly, WHY would anyone do that?

It is impossible to watch the new version of West Side Story and not continually compare it to the 1961 original. But there does come a point, about halfway through, where Spielberg finds a way to separate himself and firmly establish his own voice and his own perspective on the classic. While the basic setup, story and structure of the film do stay true to the original, it is in the telling of the story and the writing that allows this new version to find its way and breathe its own air.

Still set in New York City in the 1950s, West Side Story tells a version of Shakespeare’s Romeo and Juliet, with two young lovers, Tony and Maria, falling in love, despite each being part of rival gangs that fight for the same area of a decaying neighborhood in New York City. Maria is sister to Bernardo, the leader of the Sharks, a gang of Puerto Rican immigrants who are constantly fighting not only for turf, but for respect in their adopted country. Tony, meanwhile, is a founding member of the Jets, a gang of white kids who feel the Sharks have invaded and taken over their neighborhood. The Jets are led by Riff, Tony’s bitter best friend, who has a personal vendetta against Bernardo, and is looking for a fight. When Maria and Tony are immediately drawn to each other across a dance floor and steal a forbidden kiss, the war between the two sides escalates and the battle lines are drawn, with Tony and Maria caught in the middle.

Although it would be hard to improve on a story based on a Shakespeare play, somehow screenwriter Tony Kushner manages to build a fuller and more emotional connection through the story than in the original film. While the original film feels more built on the musical numbers, this version really takes the time to establish the characters and get the audience to feel as if they are in the world of the film, starting with an opening montage that powerfully establishes the setting and draws the audience in. Cinematographer Janusz Kaminski establishes the gritty, grainy underbelly of New York City using shadow and close-ups and exquisite camera movement. By the time we are even introduced to the characters, we are already there with them, in their world, feeling as if we’ve always been there and we know exactly who they are. And this is only in the first ten minutes.

Setting aside the musical numbers for now, West Side Story delivers a fuller, richer story than its predecessor, and that’s where it really separates itself. Between the musical numbers, there is a real effort to communicate theme and history, personal relationships and group dynamics. Issues of racism and sexism, even transphobia, are handled deftly, allowing them to enrich the plot, not detract from it. The actors feel as if they were cast for their whole embodiment of the characters, not just the singing and dancing parts of them.

An interesting side effect of Kushner’s more illuminating and richer examination of the original story is the realization of how lopsided the story really is in favor of the Jets. When you think of the original film, it feels as if the Jets and Sharks are equal players in the story, but when you see it truthfully, it’s clear that the most significantly written characters are Jets and the Sharks are merely serving as the supporting players. The Jets get three huge numbers, “Jet Song,” “Officer Krupke” and “Cool” while the Sharks get “America.” Granted, “America” is by far the best number in the film, and one of the best musical numbers ever written, period, it is still lopsided, and it’s something I never noticed before, despite having seen the original film a hundred times. It is Kushner’s screenplay that achieves this fuller, more textured, more honest and more revealing experience, and a true testament to his unique genius.

But what also greatly aids in the flushing out of the story are some absolutely magnificent performances which allow the fuller, more realized screenplay to come to life. While everyone on screen is perfectly cast and all play their part perfectly in creating the world of this film, there is no denying the fact that Ariana DeBose, who plays Bernardo’s girlfriend Anita, and Mike Faist, who plays Riff, steal the screen from everyone each time they are on it. DeBose is fiery and passionate, strong and elegant in her performance as a woman torn by love. In the role made famous by Rita Moreno—and won Oscar for it—DeBose makes Anita her own, never once imitating the legendary Moreno, who herself has a part in the film. It must not have been easy for DeBose to deliver in a key emotional moment playing Anita when the original Anita was standing right there, but she conquers the uniquely meta moment with poise and power.

As for Mike Faist, he flat-out steals the movie. His Riff is sneering and bitter, vengeful and pathetic, haunting and sorrowful. Faist delivers every line with a casual arrogance that is perfectly calibrated, perfectly timed, perfectly weighted. You can feel his character’s history, his pain, his hopelessness, and yet you can also feel his love for his Jets, and especially for Tony. Faist is able to layer a depth below the hard outer shell of Riff and in the brief moments he lets it crack open, we are able to see Riff for the complicated and emotional character he really is.

No matter how many ways this new version of West Side Story may separate itself from the original, the one way it follows perfectly is in the fact that the supporting cast is all stronger than the two main actors, around which the film is built. Ansel Elgort, who plays Tony, and Rachel Zegler, who plays Maria, are both fine and deliver satisfactory performances, but they are the least interesting and the least believable. Elgort never looks comfortable and Zegler, while she is charming, is betrayed a bit by her inexperience. There is no chemistry between them, which is disappointing, but they do deliver the songs well, and Elgort particularly does well to navigate Spielberg’s demanding direction during the famous balcony scene, which takes place on a fire escape, and requires Tony to climb up and down and through and over multiple levels of production designer Adam Stockhausen’s complicated set piece, which is, frankly, Elgort’s most impressive performance in the film.

In the end though, nobody is going to West Side Story to see Ansel Elgort climb a fire escape. Everyone is there for the music, the singing and the dancing. Choreographer Justin Peck based the dance sequences on the original Jerome Robbins choreography, and the numbers are thoroughly enjoyable, if not truly eye-popping. There could have been much more dancing, but what is there is effective. The best number, not surprisingly, is “America,” which does live up to the pressure and delivers with gusto. I had to fight the urge to stand up and cheer and applaud at the end of the number, as it never fails to elicit pure joy.

There is no denying that there are few challenges as great as remaking a film as perfect as West Side Story is. But, in Steven Spielberg, you have a director who is not only fearless, but understands that it is possible to embrace the original and still find new ways to expand on it. It’s fine to be skeptical, but just know that there is so much love and tribute paid to the original in this new version of West Side Story that, even if you’re a purist, there will be something, somewhere, in it that just might win you over.