Movie Review: ‘War for the Planet of the Apes’ wages genuine tentpole greatness 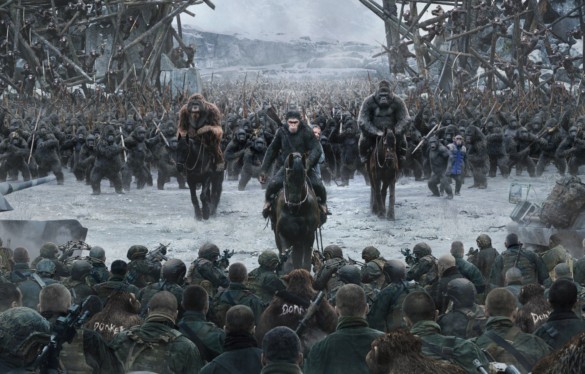 Synopsis: After the apes suffer unimaginable losses, Caesar wrestles with his darker instincts and begins his own mythic quest to avenge his kind.

As simians and Homo sapiens touch base with their lowest, the Planet of the Apes’ prequel series reaches its peak in quality. Not only does War continue its predecessors’ gallant practice of allowing humanity coexist with digital wizardry, it also lets the conclusion to Caesar’s (Andy Serkis) story reaches the suitable – and logical – dark pitch. Except for the PG-13 rating, War’s craftsmanship and emotional factor are as astounding as the third film of another animal-related tentpole franchise (hint: also from 20th Century Fox), and that should translate to major returns and audience appreciation come July 14.

From the title cards, and hopefully correct summation, the Simian Flu has been around for 17 years – Dawn begins 15 years after Rise, and War ignites two years after the traitorous Koba (Toby Kebbell) is vanquished. In the apes’ world, peace is there but always short-lived, and its leader is intermittently haunted by both his adviser’s death and of old age. As for the humans, those survived the flu have united under the leadership of one vicious Colonel McCullough (Woody Harrelson), all bent on either killing simians or enslaving them as “donkeys” for heavy labor. All these details are succinctly delivered in the film’s outstanding starter, a failed attempt to take down an ape fort through the eyes of young soldier Preacher (Gabriel Chavarria), with every moment steadily and beautifully photographed in a gelid blue that coats the woods.

Unlike Dawn, War was not shot in 3-D from the get-go. Regardless of the format it is seen in, the film constantly envelops viewers, in rain or in snow, since level-headed work from d.o.p. Michael Seresin and editors William Hoy and Stan Salfas are kind to one’s optics – perhaps the kindest in recent memory. Seemingly endless is the war and expansive is the ravaged world, two things the framing and prolonged lingering manage to evoke. The presence of meaning behind the workings in War is definitely a refresher after whatever hell the editing suite of Transformers: The Last Knight has conjured.

There are plenty of lengthy occasions where people under the mo-cap suits, who are already underneath WETA’s meticulous rendering, come to the fore. The franchise’s central asset – humane gazes from the apes that burst with audible thoughts – is in its most impressive form here, adding more foundation to the mind-blowing artistry residing in these quasi-visible performers – Serkis, Karin Konoval (Maurice), Terry Notary (Rocket), Ty Olsson (“Donkey” Rex), Aleks Paunovic (Winter), to name a few. Relating to the apes is a scarily easy thing since director Matt Reeves wisely understands that CGI is a tool to complement rather than dominate. Prepare to be as shaken as Caesar when soldiers raid his home in the dead of night, to be as curious as Maurice when he encounters the young mute Nova (Amiah Miller) and to be as involved as the band to listen to what the endearingly over-considerate Bad Ape (Steve Zahn) has to share.

The design of the Apes‘ prequel series don’t exactly favor humans, story and acting-wise (even a luminary like Gary Oldman finds himself overtaken by Serkis in Dawn), but that does not mean performers of flesh-and-blood won’t do a valiant job. Harrelson has the most success, without a doubt; the actor fuses his character with a hunger to see Caesar on his knees and in turn the reinstatement of humans as the top species.

Still, history repeats itself: One ape actor outdoes a screen veteran, but in a surprising turn it is not Serkis who gets the spotlight. Despite War being the first time Zahn does mo-cap work and becoming an animal, his turn as Bad Ape is thoroughly striking – whether it is courting hearty laughs with a spot-on emphasis of “No!” or drawing mist to the eyes while revealing his pre-war life.

No matter the mood, Michael Giacchino’s score is prepared. The notes are notably more solemn than Patrick Doyle’s Rise or the composer’s own in Dawn, but the modest brilliance gratifies; no more than a few taps on the ivory and made visible is Caesar’s weariness, the humans’ desperation and two species wrangling to avoid extinction. Along with Baby Driver, War has music moments that are eligible to be the year’s best.

“Apes together strong,” Caesar teaches his followers, a reminder that unity can change the tide of anything. That lesson extends to the Apes’ prequel series as well, showing how a commitment to let elements blend rather than compete can sculpt what seems to be conceived as cash-grab reboots into transcendent blockbusters. A big thanks to Reeves and Rupert Wyatt for fashioning a trilogy of unconventional war films, with each installment a genuine event for the senses and a mesmerizing inspection of humanity.