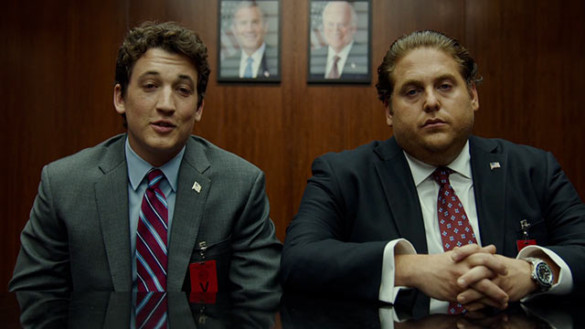 Synopsis: Based on the true story of two young men, David Packouz and Efraim Diveroli, who won a $300 million contract from the Pentagon to arm America’s allies in Afghanistan.

Poor advertising can make or break a film. Whether it be the groundbreaking, eye boggling trailers (Suicide Squad) or just making a film appear it is apart of one genre when actually belonging to another. Leaving us as an audience disappointed when we go in expecting a drama and receiving a comedy or vice versa. And the absolute perfect example of this working in the audience’s favor is Todd Philips’ “War Dogs.”

Down on his luck massage therapist, and bedsheets salesman David Packouz (Miles Teller) is having trouble living the life he dreamed of in Miami Beach. After attending a funeral, David reunites with an old childhood friend Efraim Diveroli (Jonah Hill) who promises him fame and fortune as an arms dealer. With a baby on the way, David agrees to Efraim’s offer and the two begin what becomes known as one of the biggest arms scandals in the U.S. The two start running guns, literally, and start making money hand over fist. The two run into a bunch of speed bumps throughout the entirety of the film, ultimately ending up in their downfall.

The story is very well written, and very well delivered. The set up for the obstacles that the two encounter are very well thought out by the writers and very believable in the scenario that they two are placed in. A strength that the story possesses is that the two characters are each other’s own downfall, and their own worst enemy within the entirety of the film. Miles Teller is abrasive and demanding when he shouldn’t be and Jonah Hill is so wrapped up in himself that he can’t see straight. This makes for a very healthy, and effective set up as far as story telling elements go.

Speaking of Miles Teller and Jonah Hill, the dynamic duo both deliver stellar performances. Miles Teller seems to be starting a breakout career of sorts, with his breakthrough performance in Whiplash, and an upcoming Oscar worthy performance in Bleed for This, Miles Teller delivers yet again in War Dogs. At first, he kind’ve takes a back seat to Jonah Hill’s abrasive performance, but then more towards the end of the film, he breaks out of his shell and shines like the young promising actor he is proving himself to be. Personally, I get very excited anytime that Jonah Hill decides to do a drama performance versus his usual comedy repertoire. Jonah Hill is slowly proving more and more that his acting abilitity has a much farther range than witty one liners and back and fourth comedy routines. Jonah Hill absolutely shines in this film, and she be prospected by more drama directors for future projects.

Todd Philips is the man in the chair for this film, making it his 9th feature film. Philips is mainly known for directing the wildly popular comedy “Hangover” trilogy. But honestly, seeing this film from him is refreshing. The “comedy” in the “Hangover” is very lackluster and does not produce many laughs, and I believe Todd Philips realized this. War Dogs is a very effective and powerful drama about two guys trying to chase a dream and failing. The direction given by him is riveting and I believe he should continue to pursue dramas because this film is a perfect example of how to create drama.

As far as a production, the film is very standard. The cinematography is very straight forward and standard. The production and costume design don’t have a ton of outlandish and eye-appealing designs. But this just continues the whole proving that film relies on it’s screenplay and it’s story to deliver the drama. We don’t need any spectacular spectacle, or wonderful camera moves or production design because this film relies solely on the strength of the story, the dialogue and it’s characters.

War Dogs was advertised mainly as a comedy and I believe it fails in that endeavor, the film does not have a lot of funny moments, and the comedy it attempts to force into the film is not effective in anyway possible. I believe that this is the reason behind many other bad reviews of the film. The film is not a comedy in any means, there are funny moments hidden within the film, but the film is about a very serious subject and deals with a lot of serious subtext. That being said, this is an example of how bad advertising can work in a film’s favor.

War Dogs is a spectacular drama film, with a nearly flawless screenplay. The onscreen duo of Miles Teller and Jonah Hill, is just a pure joy to watch for the duration of the film. The story is told and delivered effectively and this film deserves much more attention than it is receiving by critics and the general audience.