Movie Review: ‘Waiting for Anya’ is a bland and oversimplified WW2 drama 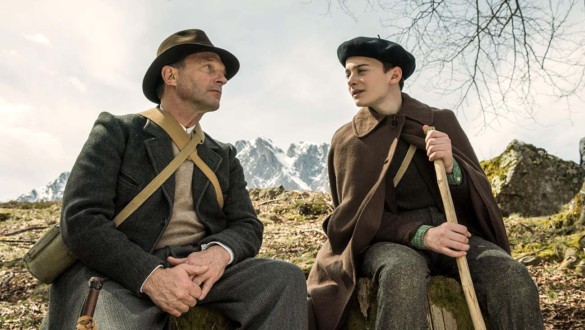 Synopsis: During the harrows of WWII, Jo, a young shepherd along with the help of the widow Horcada, helps to smuggle Jewish children across the border from southern France into Spain.

“Some people collect coins or stamps. We collect enemies of the Third Reich,” says the widow Alice Horcada, played by Academy Award-winner Anjelica Huston, who will not be winning a second Oscar for this performance. But, you know what, if AMPAS had to allow Waiting for Anya a nomination somewhere, Huston in Supporting Actress would probably be the most deserving recognition. Because she, by playing every single scene like it’s going to be her Oscar clip, manages to be the only entertaining thing about this pretty poorly made film that continually pulls its punches and never justifies its own existence.

As an actress-centric person, let me guarantee you that Anjelica Huston is doing some serious actressing here. Offering smoldering looks and casually waving a big steak knife around while speaking like it’s a maestro’s baton—for the utmost emphasis. No one else in Waiting for Anya is on her level. And truly all she’s doing is the bare minimum. Nothing against her, though. The film simply doesn’t give her many opportunities to dig, but she somehow finds a way to turn otherwise dull moments into amusing scenes. She’s so competent that you almost forget she’s a rape apologist in real life. Performance-wise, the only letdown is her hokey accent, but that’s not limited to her.

Waiting for Anya is set in Nazi-occupied France, and the accent work is wonky as hell. Look, accents are hard to do convincingly, no question. And unfortunately that’s just one of the several areas where this film falters. It honestly would’ve been less distracting if the actors had just spoken with their normal enunciations, regardless of where they hail from. Most of the accents sound so phony that even Jean Reno’s seems fake by association. Thankfully, lead actor Noah Schnapp, who is of French-Canadian descent, capably enough pulls it off.

Capable enough. That about sums up Noah Schnapp’s acting chops. It only takes a handful of minutes to gather that Schnapp’s range is, to put it politely, limited. His presence overall just lacks confidence. And the kid seems to have never heard of subtext. His performance is just too damn earnest, to be honest. But that’s a running criticism I have with the whole picture. Ben Cookson’s direction is completely uninspired. For a motion picture about a group of defiant villagers smuggling Jewish children across the French border into Spain as the shadow of Adolf Hitler looms larger every day, Waiting for Anya is shockingly… not harrowing at all. The story plays out on screen in the most unexciting, anticlimactic fashion. So maybe Noah Schnapp is not entirely to blame for his portrayal, since the narrative itself is about as devoid of texture as the cinematography.

Really, I have not seen lighting this flat in a long, long time. Every scene is as broadly illuminated as can be—and unnaturally so. Director of Photography Gerry Vasbenter’s light is entirely unmotivated. Light within a scenario should appear to come from an established source within the frame, like a lamp or chandelier. Mind you, a practical is seldom the actual emitter of most of the light. But, ideally, it should seem as though it is the sole source. In theory, augmented luminosity should only reach as far as it perceivably would, only be as intense as it perceivably would be, and be the color temperature that it perceivably would be—and a good cinematographer achieves this by painting with off-camera lighting instruments; that’s literally their job. When done competently, the result is sneaky movie magic. Set Decorators Philippe Cabrie and Jacq Eric even lent Vasbenter several lovely practicals so as to render era appropriate atmospheres. But he foolishly opted to take an old Hollywood studio approach instead and inexplicably lit each set-up uniformly from above. This causes a stagey ambiance. The broad lighting on top of the camera department’s choice to shoot this period piece digitally gives this film a painfully artificial veneer. A film’s look should reflect the tone and gravity of the story being told. Here it’s all much too clean.

Likewise, the costumes are far too crisp. Every garment worn in Waiting for Anya has virtually zero wear. These characters, for the most part, are working class people, so I have a hard time believing that they would have the means to don a fresh outfit every day. I realize that clothes in a period film should not necessarily look years old, but they should at the very least look like they’ve been worn once. This apparel is straight off the rack, making the costumes look all the more like costumes, you know? And no designer should want that. It’s as if each garment had been rented and could not be even remotely soiled or else the wardrobe department would lose its deposit. It screams high school theatre.

And considering the target audience for this film is children, I’m somewhat willing to begrudgingly forgive its many missteps. Its many missteps. And missteps is wording it, shall we say, lightly. I understand that the production’s likely intent was to produce a movie safe to show in elementary grade classrooms, but Waiting for Anya could’ve been so much more meaningful if the filmmakers had just been honest with their depiction of the events therein as opposed to oversimplifying the material. Respect your audience. Kids are not dumb. And they’re not as fragile-minded as a lot of grown-ups think. Speaking personally, I was a child who detested most children’s programming because I could tell even at a young age when I was being spoken down to—when content was being watered down for my supposed protection. So, I have a feeling that if I saw this movie back then, I’d dislike it just as much as I do now for that exact reason.