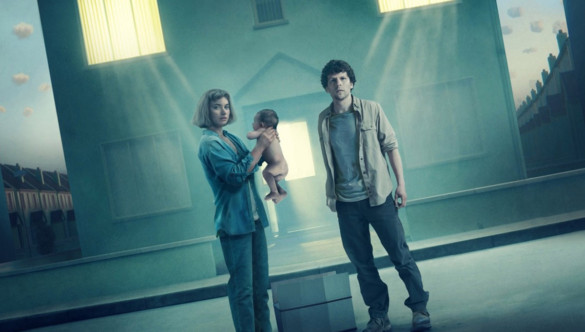 Synopsis: A young couple looking for the perfect home find themselves trapped in a mysterious labyrinth-like neighborhood of identical houses.

For a film with such an excitingly simple pitch, Vivarium is a perfect example of squandering a great idea when you don’t have anywhere to go with it. It’s a prime illustration of being unique while still not being good, as writer Garret Shanley creates an interesting meditation on domesticity which eventually sours into a blunt and empty experience. Despite the film’s unique set design, solid acting, and an inspired first act that promises something way sharper, the Imagine Poots and Jesse Eisenberg vehicle spins its wheels until they fall off.

Still, that initial setup is more promising than your standard indie. Tom (Eisenberg) and Gemma (Poots) are a happy young couple who have been house hunting but haven’t found many appealing options. One day after leaving the school where Tom is a handyman and Gemma is a teacher, they go visit an office for a new development titled Yonder. The agent for the development is Martin (Jonathan Aris), and while they’re something off about him, they follow him to visit Yonder. Soon after entering the home, Martin is gone, and they can’t find a way out. Soon after that, a baby arrives in a box on the doorstep. A note follows which tells them to raise the kid.

With this setup, director Lorcan Finnegan creates a series of admittedly hellish scenarios and creepy images. The problem with some of the admittedly cool iconography is how thuddingly obvious the metaphors can be. After being trapped and forced to raise the baby in this plastic embodiment of happiness, the film reveals itself to be about how a family life can be a painful and soul-sucking experience. It seems like Finnegan was in a confining relationship before writing this, as if he wanted to translate how relationships are inherently bad and limiting. The fundamental thesis here is difficult when it feels a deficient view of how things can be. Although there is an inherent creepiness to the setting of Yonder, the flimsy text doesn’t do this potentially interesting concept justice.

While the material is working against them, Eisneberg and Poots try their hardest. Eisenberg, in particular, feels a bit odd for this role. As one of the most nebby and frail actors of a generation, he feels odd in a role where he’s supposed to represent middle class angst and impatience. His character introduction feels almost jarring when he jokes around with Poot’s Gemma while playing that handyman. He still tries his hardest, and in the scenes where his resentment towards the child is the clearest, his character feels like the ideal combination of cutting and aggravated. Poots does good work as well as a naturally compassionate person who is forced to be compassionate to a giant annoyance. While both actors veer towards over acting from time to time, the two talents make this potential slog a watchable film. Even though the two tried, they couldn’t overcome a script that feels both apparent and undercooked. A good idea or two can only get you so far it seems.