Movie Review: Sony’s ‘Venom’ is a light that’s gone out far too soon 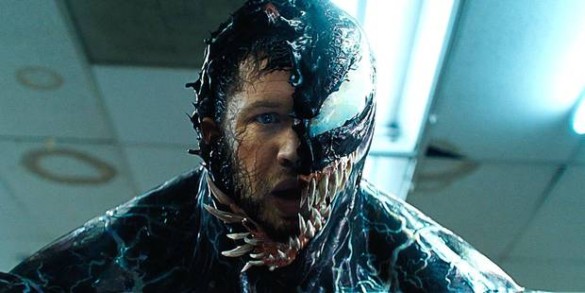 Synopsis: Journalist Eddie Brock is trying to take down Carlton Drake, the notorious and brilliant founder of the Life Foundation. While investigating one of Drake’s experiments, Eddie’s body merges with the alien Venom — leaving him with superhuman strength and power. Twisted, dark and fueled by rage, Venom tries to control the new and dangerous abilities that Eddie finds so intoxicating.

In May of last year, Sony caught everyone off guard by announcing out of the blue a solo Venom movie to be released in 2018. People were even more surprised to find out that Tom Hardy would portray the infamous character/villain Eddie Brock. Now that it’s finally come full-circle and to fruition, is a solo Venom film even capable of functioning on its own? Will it set the precedent(s) for future solo villain/anti-hero installments? The argument that can be made, and that I’ve seen being made with standalone comic book films centered around an antagonist have been making big waves with the release of this film. I’ve seen constant statements that all fit under the category of, “What’s the point of a Venom movie without Spider-Man?” and most recently with the announcement of Todd Phillips’ standalone Joker film, “What’s the point of a Joker film without Batman?”, have all come across as different perspectives of this new era of superhero or in this case, supervillain storytelling. With Venom being a potential door for more villain centered projects to be greenlit, does it ultimately live up to those specific standards?

The character of Eddie Brock himself is definitely one of the more notable (and clever at that) personas to be adapted to the the big screen from Marvel’s discography. After the calamity of Brock and Venom’s live-screen adaptation debut in 2007’s Spider-Man 3, Tom Hardy’s depiction of the journalist turned part alien is definitely one of the more fulfilling larger-scale successes of Venom. He fully establishes and embodies a character we don’t mind rooting for throughout the entirety of the films lackluster tale. As he maneuvers in this almost hard-headed, wiseguy attitude yet still incorporating a side of masculine charm and confidence. He’s perhaps the most superior component to have been taken from this film. While he’s not given much to go to work with in terms of storytelling and structure, himself and nearly every other relevant supporting cast member harness what minimal material they’ve been given to accentuate the film from being less of a potential disaster than what it eventually ends up being.

You would think that a team of around 2 or 3 writers would be capable of executing a fleshed out, balanced and absorbing narrative that remains intrinsic to the Venom comic. Yet in such a case, that does not seem to happen here. This lackadaisical effort of a screenplay is merely a rough outline of a Venom film that’s comprised of inept character development/study, a provisional main plot with the inclusion of essentially poor contrasting elements attached, and a last-minute rising action and a finale that rarely achieves anything redeeming about our protagonist.

While Tom Hardy gives an incredibly solid outing (as stated before) of playing the role of Eddie Brock/Venom, The character arc and evolution of Brock that’s set before him runs quite inferior to his portrayal. This is quite applicable to everyone else too. Riz Ahmed as our villain Riot, is just another joke within itself. Not to be mistaken that Ahmed isn’t skilled enough to wear the pants of a commanding antagonist, but his eventual transition into those shoes is so blatantly rushed that it seems as if it’s coming out of nowhere. The climax also has little to no effect on the audience whatsoever. The movie becomes arrayed so far off track both before and after Brock has made contact with the symbiote, that once incidents are about to transpire, it’s by far too late and they’re unprepared to attempt to rescue the mishap they’ve just set. It has no sense of direction of where it wants to head until ⅔ of the movie is over with. I also am not convinced that Brock has fully accepted the powers of Venom that continue to engulf him as the film goes on. It hardly ever feels like Brock has a fulfilled connection with the manifestation of Venom inside of him that’ll allow him to continue to grow and thrive. Additionally, the humor between the two, while quite funny at times, is also a fault of the inconsistencies between its tone and lack of fundamentally sound plot escalation and storytelling.

Since the initial news that was published containing an early design for the symbiote along with the first official trailer last April that ultimately unveiled the final design of Venom, left me then and more than ever now, not fond of its final appearance. Especially when taking into consideration how the character is being integrated parallel to the tasteless choreographed action sequences. Venom himself looks abundantly tacky—with an overly muscular, meathead upper body and a noticeably hysterical pair of chicken legs. It also isn’t beneficial when the CGI brinks on borderline horrid at times. The practical effects (car chases, explosions) are perhaps a nominal highlight for the film, yet everything else that’s computer generated, consisting of Venom’s look and any other ample occasion too big to be conducted in real life, is so ridiculous and unjustifiable for a project of this brand and value. Sony and the remainder of the crew could’ve done a much more affluent job in attempting to nail the efficiency of such a key aspect.

Venom easily leans more toward the negative side of the spectrum. But with that being said, this venture of a film is most certainly watchable and tolerable for something that abides by the bare minimum of filmmaking standards. It can be very irritating throughout the story when recognizing the variety of characteristics and facets that they should’ve capitalized on, that they didn’t. However, it’s definitely still a linear tale that maintains an integral origin of schlock, while also playing off of its inconsistent tonal nature. All we can hope for now is that the upcoming batch of villain centered projects don’t all fall victim to something of this similarity.