Movie Review: ‘Velvet Buzzsaw’ hacks off more than it can handle 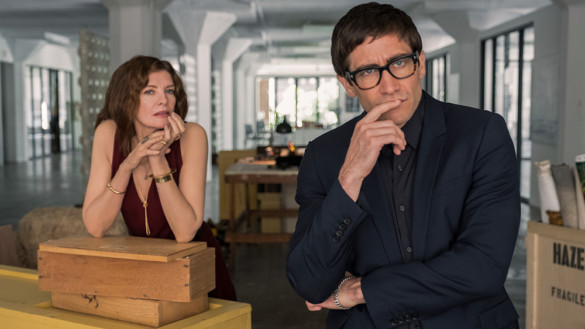 Synopsis: After a series of paintings by an unknown artist are discovered, a supernatural force enacts revenge on those who have allowed their greed to get in the way of art.

I watched David Lynch’s masterful film Mulholland Drive just days before I watched Velvet Buzzsaw on Netflix. Maybe it was the freshness of the former in my mind, but it seemed the latter was reaching for a similar effect. That was even before Dan Gilroy’s new film takes its story to the famous L.A. road and looks out over the dazzling lights of the city. But what Lynch’s film had was a tenacious adherence to its story – something Buzzsaw lacks at every turn.

That’s not to say that this film doesn’t have its own merits. It is certainly a work of ambition. And, honestly, to compare almost any film to Mulholland Drive is unfair, indeed. This film wants to be about art, and it is on some level. But then it wants to frighten us. Then it wants us to think deeply. But I found myself being compeletly unmoved at each turn. I didn’t feel when I was supposed to. I don’t think that means I am a jaded robot. I think it means this film was too focused on effect and not nearly focused enough on how to bring about those effects.

This is a story about the art of Vetril Dease (Alan Mandell). It is also about Morf Vandelwalt (Jake Gyllenhaal), Rhodora Haze (Rene Russo), and Josephina (Zawe Ashton) and their attempts to profit off that art. Vandelwalt is the preeminent art critic of his day. Haze is a purveyor of fine art, and Josephina is her employee trying to make a name for herself. They are blown away by Josephina’s discovery of Dease’s previously unknown artistic talent. But that isn’t the last surprise his art has in store for them.

Is this a story about the necessity of art completely separated from its monetary value? Yes, it most certainly is that. Is this a story about the will of the artist coming through in their work? Surely it is. Is it also a horror film? There are elements, yes. Is it an arthouse film? There you most certainly would have more debate, but I think this film wants to be that type of film. It wants deep thoughts from its viewers. It wants to create discussion. But I cannot overstate the fact that I felt completely numb after watching it. There was no emotional reaction whatsoever. I wasn’t moved and I wasn’t stimulated. Something didn’t work for me in this film.

I believe all great art is an entity unto itself. Yes, the artist imbues there own meaning and will into it. But at some point, those great works take on a life of their own. We react to them in different ways each time we revisit them. Mulholland Drive is such a film for me. I’ve seen it four times now, and each time it has brought about a visceral reaction within me. Again, I realize I am doing Velvet Buzzsaw no favors with the comparison, but the film invites that very comparison. The problem is that it wants to be too many things, where as Mulholland Drive is a work of complete focus.

We meet Valdelwalt early in the film, and we begin to learn about him. But a storyline about his romantic involvements is completely detached to the point where we simply don’t know enough to be invested. We never see his former lover on screen, and it negates the impact of the fling we do see. In fact, we don’t really connect with any of these characters. It’s said that you must know the rules of art intimately before you attempt to break them. While David Lynch is famous for leaving the details of his stories fuzzy at best, he knows how to give us enough to be fully invested. Gilroy would have a better film here if he did the same.

The film is buoyed by the acting performances, for sure. Gyllenhaal is an underrated performer, and although his performance here is kabuki-like, it serves the story. Russo, Ashton, and the severely underutilized John Malkovich all bring skill to their roles. There performances drew me in, but there simply wasn’t enough there to stay.

One character has a tattoo that reads “No Death. No Art.” As the film continues, we begin to realize the truth of this statement. Another character asks the question “What is art if it isn’t seen?” Are the great works of art the ones that sell the most, or are there even greater works languishing away in anonymity? Are the great works the ones that are imbued with artistic pain and that bear the weight of mortality? I don’t know. Velvet Buzzsaw would like to consider some of these questions, I think. They are worth considering, but it would take a better film to do so.

There are entertaining moments in this film. And there are thought-provoking ones too. But my suspicion is that those who come to the film for either one will find them lacking. This film lacks the focus necessary to pull any great insight from its content. There is that oft-used internet age word – content. In our age of social media and diverted attention, many have attempted to substitute content for art. Velvet Buzzsaw may think itself as art, but I fear that it is just another entry to throw on the Netflix heap of content.

Hear our podcast review on Episode 311!