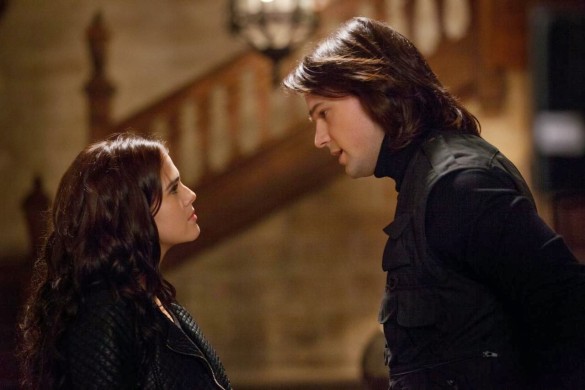 Synopsis: Rose Hathaway is a Dhampir, half human/vampire, guardians of the Moroi, peaceful, mortal vampires living discretely within our world. Her legacy is to protect the Moroi from bloodthirsty, immortal Vampires, the Strigoi. This is her story.

INTRO
You can blame the Twlight Series for the sudden urge to make all books of that nature into a film. The only successful film thus far in my eyes is the Hunger Games series and it is simply because of Jennifer Lawrence. Nevertheless, the next batter is Vampire Academy. Vampire Academy is a movie that I never heard about until last week and after finding it was a book I knew right away what to expect.

DIRECTION
Vampire Academy is directed by Mark Waters-if you are best known for directing Mean Girls and Freaky Friday than that cannot be a good thing. As soon as the film starts it is a train wreck with a very fast paced moving storyline and a plot that has more layers than a Stephen King novel. I noticed that half the theater was either asleep or bored within the first 20 minutes of this film. Waters does the one thing I cannot stand in films and that is flashbacks and dream-like sequences. Those two can be used efficiently if it enhances the film but in Waters’ case it simply makes you even more lost and confused. The fighting scenes also were not shot very well and in fact I think I have seen better shot videos on a Blackberry. I am also tired of all these Twlight inspired movies using vampires because this film embarrassed vampires so badly that I would not be surprised if Dracula files a lawsuit.

SCRIPT
The plot follows Dhampir (half-human/vampire) guardian-in-training Rose Hathaway (Zoey Deutch) and her royal Moroi (the peaceful, mortal vampires) best friend Lissa Dragomir (Lucy Fry) as they are dragged back to their school-St. Vladimir’s Academy. The two girls soon realize that the threat of the Strigoi (bloodthirsty, undead vampires) is bigger than ever. The dialogue was very cheesy and I hope the novel was written more coherently because this film had too many characters and we hardly knew much about any of them. I think the script was written for people who already read the book. The plot is so dry that 5 people walked out during the middle of the film.

PERFORMANCES
There is not much to say about the performances of the film except that the film has a weird love relationship between Rose and her much older mentor, Dimitri Belikov (Danila Kozlovsky). The movie never really gives us a chance to get to know any of the characters because the plot went quicker than a NBA basketball game.

SCORE
If there is any shining light on this movie, it would have to be its score. The music was composed by Rolfe Kent. Kent is no stranger to films like these as he also did the score for Freaky Friday. The music he selected was crafted to fit perfectly for the target audience and featured songs from such artists such as Katy Perry, Sky Ferreira, Natalia Kills, Au Revoir Simone. This of course was not enough to save the film.

IS IT WORTH IT?
Based on the crowd reaction and my thoughts on the fail I predict this film to fail at the box office and also make my top 10 worst movies of 2014. Thankfully, I did not waste my money and I’m hoping you will go see The Lego Movie if you must watch a movie this weekend