Movie Review (LFF): ‘Undine’ is Too Slippery to Fully Capture the Heart 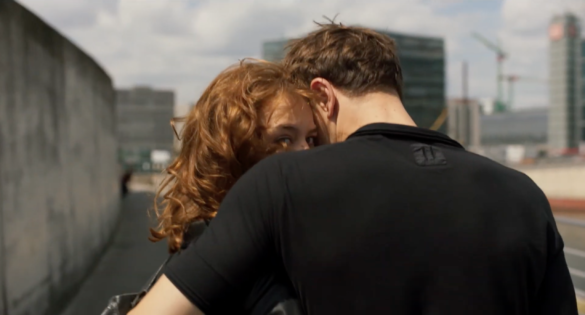 Synopsis: Undine works as a historian lecturing on Berlin’s urban development. But when the man she loves leaves her, the ancient myth catches up with her. Undine has to kill the man who betrays her and return to the water.

With her deep eyes and a flock of red hair, the ethereal Undine (Paula Beer) enchants from the moment you see her. For the men drawn into her whirlpool presence, it’s love at first sight. Blending genres to various successes, Undine is a romantic fantasy that begins with a turbulent breakup. Johannes (Jacob Matschenz) is having an affair. It’s the last thing Undine needs to hear before she gives a history tour at work. Undine warns Johannes that if he breaks up with her, he will have to die. As he did with his inventive wartime drama, Transit (2018), German director Christian Petzold meshes past and present in a somewhat diluted romance that allures as much as it disappoints.

This is loosely a cinematic transplant of Friedrich de la Motte Fouqué’s classic fairy-tale, where a water spirit comes to land to marry and obtain a soul. The catch is that the romance is forever, break it and the cost is death. Paula Beer is perfectly cast as the enigmatic Undine, able to shift illusively between a lover who sometimes feels like a ghost, as well as a silky predator capable of sudden violence. You see these glimpses in her eyes, in the off-kilter walk and, later, during a midnight swimming pool diversion that’s lit up like a home invasion thriller. But at its core, this is a love story, of a man and a woman, and Berlin, the heart of Germany. Whatever iciness shimmers in Undine’s watchful gaze, it is melted almost entirely by the arrival of Christopher (Franz Rogowski).

Quite possibly Joaquin Phoenix’s German doppelganger – possessing the same ability to shift between unstable intensity and easy warmth – Rogowski has a huge screen presence and natural likeability. This is an ideal role for the actor to slip into and one that’s just as easy for the audience to get behind. Enraptured during one of her talks about the modern reconstruction of Berlin, Christopher, with childlike curiosity, follows Undine to the café where her boyfriend has just broken up with her.

As much as the film swims between the lines of tragic romance and fantasy, there is – adding to Petzold’s kaleidoscopic sense of style – a much welcome undercurrent of comedy, which helps ground the film in its exploration of Berlin as a place of rebirth and one that still bears its historical scars.

Undine and Christopher’s first encounter is clumsy, playful, reflective of the fairy tale that underpins this film, and they end up smashing into a fish tank, collapsing beside each other, breathless and drenched. You can add this moment to the endless list of water scenes as ritualistic displays of cleansing and, in Petzold’s confident hands, it comes across as a whimsical moment of romantic conception. Before this, however, Undine hears a figurine diver call out to her from within the tank, planting Petzold’s romance firmly in the realm of fantastical possibilities. And although their romance feels too easily conjured as if they have sunk right to the deep end where no spark can crackle, this is a fairy tale, so there are no rules and anything goes.

Anybody hoping for a mermaid story complete with dramatic transformation, or even one with sharp teeth, is going to be disappointed. Petzold is reluctant to follow the film’s supernatural mysteries, of which there are plenty. It’s quite fitting Undine ends in a moment of murky darkness; this is likely how most will feel once the bubbles peter out. Perhaps more will be revealed upon a second viewing; after all, diving is all about sinking deep for the biggest treasures. Still, in a film featuring two enigmatic stars in front of the camera and a director brimming with confidence, it is a shame that the film’s mythology never moves beyond vague, dream-like underwater sequences, albeit they are magically shot by regular collaborator Hans Fromm — a giant catfish named Gunther carrying an unconscious Undine to the surface is sublime. Undine needed more of this, and less of its history lessons.

The historical underpinning of Undine is where Petzold’s juggling act doesn’t quite come off; with the romance, the comedy, water worlds, and tragedy, there’s a little too much of everything spread too thinly. Petzold wrote the script, and thematically, what the director has done here is interesting – in his head, it might have felt like a winner. Despite mostly losing me, and finally boring me — especially the second and third time you hear Undine’s lecture — the way in which Petzold has contrasted the nature of a fairy-tale retelling within the present context of a city under reconstruction is admirably clever. Fairy tales like Undine are timeless, they are cultural touchstones. By making Undine the water nymph a researcher on Germany’s architecture, Petzold has created a strange, unifying bridge between the ancient worlds scaling beneath the sea – the ones found in our stories – and the constantly shifting, developing modern world. Combine this with the handily written plot point that has Christopher, the lover of Petzold’s retelling, operating as a deep-sea diver who fixes broken turbines, and you a lot of compelling connections swirling around.

Like the heroine at its heart, this is a slippery film. A lot of things impress, but just as much goes nowhere satisfying. And since it drifts to a weightless, meandering conclusion, it’s easy to come away feeling the various elements don’t add up in the way that was initially promised. Its two stars are major talents. Petzold is another. Following the remarkable Transit, I was hoping for something a little sharper than this. However, as an enchanting love story that dreamily overlaps the old with the new, Undine just about works.