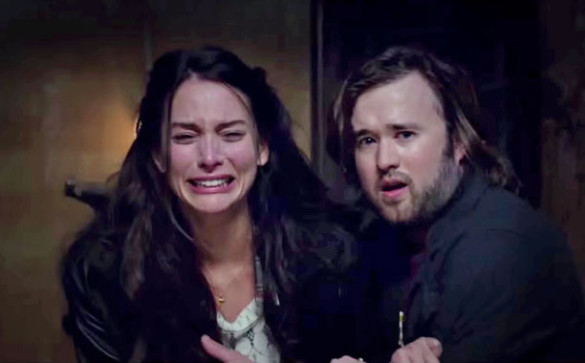 Synopsis: When podcaster Wallace Bryton goes missing in the backwoods of Manitoba while interviewing a mysterious seafarer named Howard Howe, his best friend Teddy and girlfriend Allison team with an ex-cop to look for him.

INTRO
Tusk is the result of fans pledging on Twitter than they wanted this film made after Kevin Smith talked about a hypothetical story on his podcast. I think it’s a great idea to have Hollywood listen to us and make movies we want to see. Tusk is a weird, entertaining, and ridiculous at the time, but that is not enough to compensate for it’s stretched out story and weak central characters.

DIRECTION
Kevin Smith directed this abomination of a film and the best way to describe the direction is looking at a baby’s diaper after explosive diarrhea. Tusk is longer than it should be and I had no idea that this film is supposed to be a horror film. I have seen scarier things in the toilet after eating Taco Bell. The biggest issue with how Smith handles the film is the terrible use of a few flashbacks that try to get us to care about the new Wallace and I cared as much about Wallace as Tyler Perry has Oscars. The interactions between the characters are boring and the way Johnny Depp’s character was written was downright atrocious. I am usually a fan of Smith’s work (Chasing Amy, huge favorite) and that was the only reason I went to see this film.

SCRIPT
Wallace Bryton (Justin Long) is a successful podcaster who made over 100 grand last year. Wallace along with his NOT SEE PARTY cohost Teddy Craft (Haley Joel Osment) discuss a viral video entitled “The Kill Bill Kid”. Wallace decides to head to Canada to interview the little internet sensation. The kid learned the definition of YOLO and Wallace is left without a story. Eventually Wallace meets Howard Howe, a mysterious seafarer. Howe has an odd obsession with Walrus and he kidnaps Wallace in hopes to turn him into a Walrus.

Bizarre story that was written by Smith himself and as the film went on, I could not help but wonder what kind of effing drugs were involved in the development of this script because the idea is there but the execution in horrendous. The story telling from Howe is bad and slow moving and the stupid look Wallace has on his face during the interaction just didn’t work.

PERFORMANCES
Justin Long did a commendable job as Wallace but I am afraid it’s too little too late. The last movie I seen Long in was Dodgeball. Long was the main character in Tusk and he did the best he could with what he was given. Michael Parks as Howard Howe was standout as the “villainous” Howe and Parks made the silly character believable. Johnny Depp is the best at playing quirky characters and was great as Guy Lapointe, although I found his accent extremely annoying- good job nonetheless.

SCORE
Christopher Drake’s score was the lone bright spot in this film. Drake uses a nice balance of slow and fast repetitions to keep although the pacing of the film and help that horror element that I never saw.

FINAL THOUGHTS
Tusk is simply a film that does not work and I hope the spin-off that is slated for next year is miles better than this film. Kevin Smith is solely to blame for this bomb of a movie. The only way you will enjoy this film is if you are under the influence of either marijuana or intoxicated.