Movie Review: All direction and no script makes Triple 9 a dull film 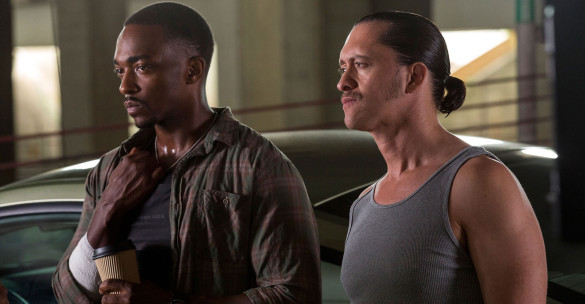 Synopsis: A gang of criminals and corrupt cops plan the murder of a police officer in order to pull off their biggest heist yet across town.

Triple 9 is a bit of an anomaly. The film features arguably the best assembled cast for a film in the past few years, topping it off with a director whom, with only a few films to his name, is already a near reckoning force in the art of gritty filmmaking. Triple 9 is a movie that is so well acted and directed, and as a result shouldn’t disappoint, nor should it lack depth, interesting characters, logic, or drama. Yet somehow it manages to do all those things it shouldn’t. This is not by any fault of the film’s miraculous cast or challenging director, but in its script, a script that is unfortunately overloaded, and yet not loaded enough.

To explain the plot of Triple 9 is rather pointless, but here’s the start. It is modern day Atlanta, the Russian mob runs the criminal biz and recruits dirty cops with real tactical training to carry out their criminal needs. These cops need to break into a national security facility (for what reasons are still unknown) and need to create a distraction to buy themselves time to pull off the heist, hence where the title of the film comes into play; a “triple 9” is police code for officer down. What happens next is far beyond logical or cohesive, not in the sense of plot confusion, but moral confusion. By the midway point you are left wondering not necessarily what is going on, but why it is going on, and why the film just didn’t keep it simple.

Matt Cook’s script packs ten pounds of story into a five pound bag. He seems focused on convoluted plot threads that continually pile upon each other, rather than attempt to establish the world of this film or its inhabitants, resulting in the film’s lack of depth for its drama, characters, and setting. It’s a script that feels overly excited to keep moving forward, instead of progressing forward, which is incredibly ironic for a film where so much happens narratively yet feels like nothing is truly happening at all. Story is important for sure, but it’s not the only important ingredient for a good film; that’s the mistake Cook makes as a first time writer, and his inexperience shows.

But the film does have its rescue team, here to cover up for Cook’s mistakes (well, some of them). Leading the charge is John Hillcoat, a director of astounding grit and intensity. Hillcoat at least attempts to bring a thematic resonance to this film, by presenting a world we may not have known existed, and painting it with a moral ambiguity. His visceral action, heist scenes, and shootouts mirror the greatness of a film like Michael Mann’s Heat, and it is truly riveting to see. And he even gets effective performances out of his entire cast, in particular Casey Affleck, Anthony Mackie, and Chiwetel Ejiofor, who are all at the heart of this film’s emotional core (for how much of it there is). And despite the plot’s convoluted nature, Hillcoat is still able to balance his cast fairly well amidst the chaos on screen.

Unfortunately, this all leads to a final act where the script rears its ugly head again, one that makes so little sense and throws all logic and drama out the window. It’s as if Cook knew what he wanted the ending of the film to be, yet had no idea how to arrive at that point. After movies like The Proposition, The Road, and Lawless, perhaps John Hillcoat should get back together with Nick Cave again; their past teamwork has made for some very consistent films, a consistency that this film sorely needed. Triple 9 could have been something spectacular, it has all the pieces of a great cast and director to make a modern crime classic, and their skills are seen in full force. That’s what makes Triple 9 more disappointing than anything else; it’s not a bad movie, but “not bad” shouldn’t be good enough here. Word of advice to any upcoming directors: do not work with Matt Cook.