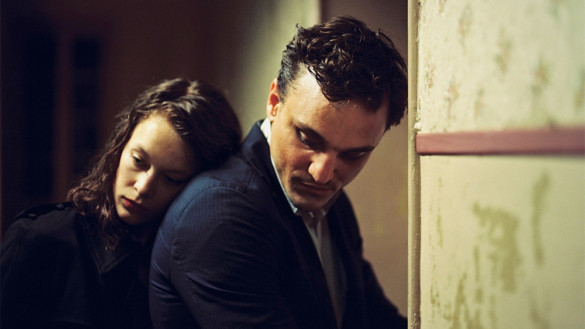 Synopsis: When a man flees France after the Nazi invasion, he assumes the identity of a dead author whose papers he possesses. Stuck in Marseilles, he meets a young woman desperate to find her missing husband – the very man he’s impersonating.

The world of Christian Petzold’s Transit is a bit of a fantasy. We find ourselves in present day France, but the circumstances mirror that of Nazi occupation during World War II. Violent prejudice exists at every corner, where victims find themselves on the run, desperate to flee their surroundings for a better life across borders. If this at all sounds historically familiar, that is absolutely Petzold’s goal. To put it bluntly, Transit is a modern-day Holocaust film, designed to work in parallel to the world’s current refugee crisis; does that make it unfair to call this a fantasy then?

Transit is a journey of hiding, where owning up to who you really are will get you caught or killed, sometimes needing to live through someone else’s identity in order to reach safety and seclusion. This story lends itself perfectly to writer/director Christian Petzold’s sensibilities, who is no stranger to making films about mistaken identity during wartime, previously explored in his 2013 near-masterpiece Phoenix. In Transit (based on the 1944 novel by Anna Seghers), Petzold chooses to keep Seghers’ story grounded in political relevancy.

This makes for an effective use of dramatic irony, putting us as the audience multiple steps ahead of the its supporting characters, ignorant of a truth far too great to comprehend. In the case of Phoenix, we arrived at a victorious final confrontation between husband and wife, but Transit leaves us with a more ambiguous and subtler conclusion, an almost spiritual revelation of unknown consequences. It works in its favor by blurring the lines of our main character’s actions, and yet simultaneously works against itself in a film that is missing a key component that made Phoenix so captivating, and that is nuance.

Our main character here is Georg (Franz Rogowski, who may be Joaquin Phoenix’s long-lost twin brother), who assumes the identity of a now dead author in order to gain passage out of the country. Things become more complicated when he meets the dead writer’s wife Marie (Paula Beer), who remains unaware of her husband’s death, desperate to find him and the transit papers he possesses for a “loving” escape together (oh, the dramatic irony). To call her desires “loving” is a very loose concept and a bit of a stretch, as Marie’s motives remain rather unclear and confused. She retains a love for her husband, yet expresses her sexual longings not just toward Georg, but even for a third man seeking his own solitude; a doctor by the name of Richard (Godehard Giese). The confusion in Marie’s arc is perhaps its intent (and understandably so, given her circumstances), but in this case Marie comes off as underwritten and morally misguided, an unfortunate aftereffect of the film’s narrative imperfections.

It’s difficult to gauge if Petzold had to work with a complexly written novel (one I have not read), but it’s surprising how dramatically direct Transit is given how Phoenix was so heavily defined by its emotional opacity. Unlike Phoenix, Petzold feels so passionately influenced by our current political landscape to the point that his approach veers quite close to being agenda-driven, at times cheaply finding ways to communicate his beliefs to us. While this leads to some riveting directional touches (a few chases sequences on foot come to mind), Petzold’s adapted screenplay relies too heavily on exposition and voiceover narration to emphasize its drama, most of which comes from an outsider’s point of view who has little involvement in the film’s overall conflict. In doing so, the film depicts its parallels to the current refugee crisis with an obviousness that makes the experience feels rather abrasive and thematically on-the-nose, which can feel somewhat troubling in a world where open-mindedness is something to value.

On the other hand, perhaps given our current political climate, this story should be overtly direct; but that approach then contradicts the film’s wonderful final act, a moment of challenging uncertainty. In its subtle conclusion, Georg’s actions come with dichotomizing consequences; he becomes aware of his own selfishness and attempts to remedy that by securing others across the border instead of himself. But this backfires, and the more good he tries to do for others, the worse off they seem to end up; the same can be said for a mother and child he befriends early on. For a film so direct, its morally ambiguous conclusion is both a welcomed surprise and a very jarring one, despite Franz Rogowski’s wonderfully empathetic performance bridging the emotional extremes of this world together. Georg’s arc is the one hopeful glimmer of kindness and humanity within a dichotomizing world, and is the film’s necessary guiding light. He is just sadly stuck in a film that becomes its own dichotomy of sorts, unable to stick to its politically direct or ambiguous guns; I wish the film felt a little less dichotomizing.