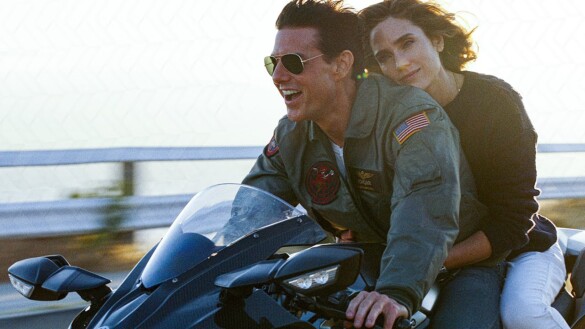 Synopsis: After more than 30 years of service as one of the Navy’s top aviators, Pete Mitchell is where he belongs, pushing the envelope as a courageous test pilot and dodging the advancement in rank that would ground him.

“This Movie has been 36 years in the making.” – Tom Cruise

These were the words that came before the Early Access IMAX Premier screening. These words have been the mantra for this film. Since Infinity War was playing in theaters, it’s been advertised and had two years of pandemic theatrical release delays. And now, it is finally here. And I can confidently say that it has entered the Danger Zone.

The 40 year sequel has become a craft unto itself in recent years. From Blade Runner 2049 to Star Wars: The Force Awakens, there has been a rush of nostalgia for the late 70s/early 80s in the late 2010s. Even pop music has skewed towards that nostalgia with Dua Lipa’s “Future Nostalgia” and The Weeknds “After Hours.” Top Gun: Maverick is the latest in this trend, but its approach to nostalgia feels unlike any other film to date. It’s the only 40 year sequel to keep the same lead actor from the first film. And it’s a film that doesn’t look to superficial 80s elements to remind us of the past.

Rather, Top Gun: Maverick uses its visual style and stuntwork to be the most 80s movie of the bunch. Cinematographer Claudio Miranda uses every moment to accentuate the emotions of characters through the picture. Lens flares, blooming, and highly saturated colors are employed expertly to achieve this goal, and that technical flair feels deeply reminiscent of 80s action cinema. The film is staggeringly beautiful at every level, from its mind-blowing action set pieces to the smallest of intimate moments.

And those intimate moments are what shine through this summer blast. By blending nostalgia and intimacy, Top Gun: Maverick manages to be more sincere than its predecessor. Screenwriters Ehren Kruger, Eric Warren Singer, and Christopher McQuarrie all show a love and admiration for the first film while laying the groundwork to deepen the character relationships often ignored. Penny, a previously mentioned character in the first film, is introduced with agency and emotional depth and it marks a major step up when compared to the first film’s shallowly written love interest, Charlie, played by Kelly McGillis. Val Kilmer is expertly integrated into the film, in spite of his lost voice after a throat cancer surgery in 2015. Maverick’s own character arc is given emotional weight as he is forced to change over the course of all 131 minutes of the film.

But it’s not just the old character relationships that have been expanded. The new cast all have their own journeys through the film, which gives weight to Maverick’s teaching. Rooster, Phoenix, Hangman, and Bob are just a few of the new aviators who undergo major changes in the film. Amelia, Penny’s daughter, packs an emotional haymaker in her small role. It’s that care and delicacy that allows Top Gun: Maverick to be more than just a summer blockbuster.

And all of this is only possible thanks to the work of director Joseph Kosinski and his dedicated crew. Every single element is firing on all cylinders; from the score to the performances, and the editing. Kosinski’s all-in attitude towards action is mirrored in the small scenes; nothing feels out of place or treated as lesser. Even the smallest exchanges between Rooster and Hangman are given as much importance as the big setpieces. Kosinski holds on shots to make awkward scenes funny, and funny scenes lonely. These are examples of the stellar direction that keeps everything deeply personal, in both the big and small moments.

Adding to this are the performances that Kosinski gets, which are all impeccable. Regardless of how small the role is, there is a good performance on display. Tom Cruise continues to exude that boyish charm from the first film, but here it is with an added melancholy that makes this one of his best performances of the past decade. Jennifer Connelly, playing Penny Benjamin, manages to feel familiar in spite of her not being a part of the first film. Miles Teller is phenomenal as Bradley ‘Rooster’ Bradshaw, being instantly charismatic and emotionally isolated through fantastic facial acting. And Glen Powell’s work as Hangman is truly electric, being both infinitely charming and arrogant in every sequence. These larger roles are matched by the supporting cast, comprised of Jon Hamm, Val Kilmer, Bashir Salahuddin, Charles Parnell, Monica Barbaro, Lewis Pullman, and Lyliana Wray. Each actor and actress bring in the sincerity needed for this love letter to Top Gun, and it’s fascinating.

Perhaps it’s all of this sincerity that brings out the one weakness present in the film: Maverick may be placed front and center, but the other characters also have arcs that would be worth exploring. Hangman, Bob, Phoenix, and Rooster all have arcs that we see the results of, but the film needed to spend a little more time in the middle putting this process front and center. Penny and Maverick fall in love over a handful of scenes, and it’s beautiful… but I want more. I don’t know if it is fair to ask for more from a film that is so lovingly crafted and paced brilliantly to be the best thrill ride of the summer, but those extra characters really could have used some extra screen time to really show the impact of Maverick’s teaching.

But aside from that, Top Gun: Maverick will take your breath away. The sound design and mix are truly breathtaking. From the low rumble of an engine to the rushing air, this film truly puts you in the cockpit alongside these aviators. This is a film that is worth the IMAX experience because its sound quality is unlike anything since Ford V. Ferrari. It’s propulsive, loud, powerful, and beautiful. This works in tandem with the film’s editing, which accentuates every beat of the story perfectly. Dogfights feel faster and more kinetic than ever before; and on the ground, Maverick’s loneliness is pitch clear.

All of these elements come together to form one of the biggest third acts in recent cinema. The tension is ratcheted all the way to eleven, the stakes are crystal clear, and the audience cares for each and every pilot. Every decision the characters make matters, and the film captures these maneuvers in real life. It wouldn’t be a Tom Cruise production without it, and that very real, very dangerous approach to stuntwork and setpieces put Top Gun: Maverick at the top of its class. The third act is constantly evolving, with call backs to this film, and will hold you at the edge of your seat. This is a flight worth taking this summer and sets the bar for every other blockbuster that follows it.