Movie Review (Sundance): ‘Together Together’ is a Sweet Story With Some Important Messages 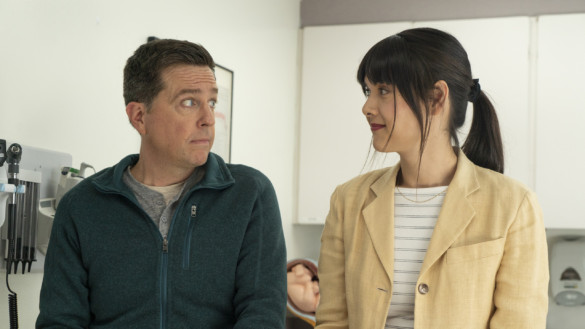 Synopsis: When young loner Anna is hired as the surrogate for Matt, a single man in his 40s, the two strangers come to realize this unexpected relationship will quickly challenge their perceptions of connection, boundaries and the particulars of love.

This film primarily works because of the two leads. Both well casted, Ed Helms and Patti Harrison give performances that on the surface look simple, but actually balance out well. It could be easy to over-perform here, but what is sweet is how their friendship naturally develops over the film. Their chemistry is believable, and part of that is down to seeing the journey from start to end. The audience is given time to understand the situation, get to know the feelings of both individual characters, and then see them work through any issues together in a way that is endearing to watch, but also reasoned and cleverly done through the script.

It is important that a story like this has humor within it because it could have been a dry watch that would have had no personal connection to the story. Having these awkward but fun moments help communicate some great messages not only help make the film enjoyable to watch but also helps make the situation feel more real. A lot of the jokes also land extremely well, both from the writing and the performances from Helms and Harrison.

This is a story that I have surprisingly not seen many people cover in this sort of medium. Whilst many stories have recently focused on the struggles of maternity and being a single mother, it is nice to see this twist in watching having a man want to have a child and to be a single dad, preparing for fatherhood. It is empowering to watch and also lends itself to some great commentary on the pressures of being a single father and the surrogate process.

This is very much a capsule story, one that is contained within its own bubble. There is a clear focus to this story and it does not want to take any focus away from our leading couple. For a film like this, it is extremely effective and does not need further distractions to be engaging for the full runtime. This is a story that is necessary to be told, as it is done so realistically and there will be people watching who either want to consider the surrogate process or to see a de-stigmatization of single parenthood. The story is incredibly impactful, even when it delves into the comedy.

There are a few nit-picks that I do have with the film. Firstly, there is one side character who works at the coffee shop alongside Harrison’s character who I struggled to care about. Considering how realistic the rest of the film feels tonally in the world-building and character development, the coffee shop worker felt like he belonged in a different film altogether. The tone was trying to be humorous with him, but just came across as a parody and anytime the film went back to the coffee shop, I just wanted straight out and to be back focusing on our leading two characters.

I also, unfortunately, found the final twenty minutes to be completely rushed. So many great ideas and messages are presented within this final part of the film that are sadly skimmed over to get to the conclusion. The final shots, whilst powerful and intentional, feel abrupt and leaves the audience feeling disconnected after warming to these characters. Despite how simple the story is, I really could have done with an extra fifteen minutes at the end to let these ideas develop and to make an even bigger impact.

I commend director and writer Nikole Beckwith for telling this story and making it feel as authentic as she did. The narrative flows naturally as we are presented with characters that are easy to warm to, situations that we may not have considered before and a perspective that is important to look at in terms of parenthood. Whilst also being a fun and entertaining film that many will enjoy, I hope people leave this film with a new view and respect for surrogates and parents-to-be.