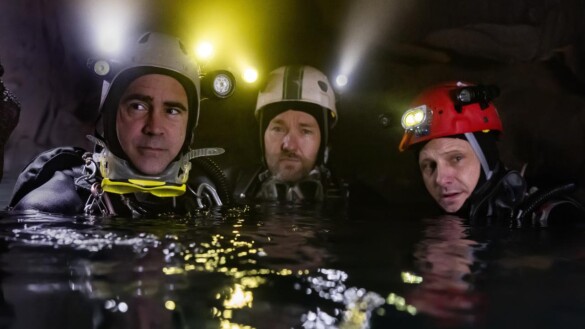 Synopsis: A Rescue mission is assembled in Thailand where a group of young boys and their soccer coach are trapped in a system of underground caves that are flooding

In June 2018, the entire world held their breath as we waited to find out the fate of twelve young boys and their soccer coach, who were trapped in a cave in northern Thailand. Deciding to explore the cave after soccer practice one day, the group found themselves unexpectedly trapped, as monsoon rains came in a month early and began to flood the cave, leaving them with no way out. It’s a story that quickly went international, and gripped thousands of people’s hearts for good reason. Everyone cared about the Thailand soccer boys, and wanted to see them make it out safe and alive. It’s no wonder that soon afterwards the rights to the story were sold to make a movie, helmed by Ron Howard. As someone who’s no stranger to survival and rescue movies, such as with his other true-story film Apollo 13, the story of the Thai soccer boys seemed to be in good hands.

Hopes were high after MGM decided to push the release date of the movie from its original April release to a more awards friendly November release, after test screenings for the film claimed to be the best in the company’s history. After MGM’s acquisition by Amazon however, the release was moved up once again to the summer release date in early August, adding a bit of skepticism as to what the film was really like. Thirteen Lives handles this story with much care, representing it not only accurately, but also filled with emotion that’s easy for an audience to connect to. Honestly, it’s easy to make a story like this one easy to connect to, and unfortunately that’s one of the only factors that makes this film enjoyable to watch. Otherwise, it tends to suffer from uninspired direction, odd pacing, and a longer than needed runtime.

It’s hard not to watch this dramatized version of events in Thirteen Lives and not compare it to the documentary on the same subject that was released last year, The Rescue, which received much critical acclaim. Unlike the documentary, Thirteen Lives fails to keep the tension consistent throughout the film. Focusing on the entire story, from the second the boys go into the cave, through the planning process, to the eventual rescue, many parts of the story ebb and flow in terms of how invested a viewer is to what’s going on. Starting with a bit of a weak opening, the tension only starts to build once we see the initial divers try to navigate the flooded cave tunnels. It’s only at that point that we begin to realize how difficult this rescue is, and how tense the journey is going to be.

Unfortunately, much of that tension is lost in the middle part of the film. For the two and a half hour runtime, I was surprised that they found the boys in the cave still alive only about 45 minutes into the film, and the rescue process only takes about the last hour. The 45 minutes in between those two events is a lot of discussion about how the rescue process should be handled. It’s definitely not wasted time, but it’s drawn out way too much, and I quickly transitioned from eager to see what happens next to tired of the next event not happening soon enough.

The rescue process itself, which should be the climax and filled with the most tension of the film, fits into this same dilemma. The procedure of the rescue itself starts off tense, keeping the audience on their toes as to whether or not this process is going to work and they’ll get the boys out. However, after the first rescue the rest just seem redundant. There’s nothing new or interesting that’s provided to make us feel as if this process is still dangerous, instead it’s played as if they did it once, they can already do it again. Because it’s based on a true story, it’s hard to keep the tension high when we already know the outcome: all thirteen boys come out alive. However, it’s hard not to compare again to The Rescue, which successfully keeps tension high throughout the entire rescue process.

Deciding to focus on the British divers who rescue the boys is an easy choice to make as well. Through this lens, we’re able to stay with the entire rescue process and understand what’s going on. It also provides the narrative with two central characters who the audience can attach themselves to throughout the course of events. Unfortunately, Howard fails to really bring these characters to life. While the acting from both Colin Farrell and Viggo Mortenson is well done as usual, I fail to really understand who these divers are, or what their motivations and morals are. Apart from being called in to help from the Thai government, it feels as if they’re just there because they have to be, simply fulfilling a job. There’s not much complexity to them, and it’s hard to care about the boys at the center of this story when it feels like the movie doesn’t really care about them much either.

As we learned as this story unfolded back in 2018, it’s hard not to become invested in the thirteen lives of these soccer boys that the film portrays. Unfortunately, the story itself shouldn’t be the only reason a film is interesting. Nevertheless, it succeeds in what it’s trying to do, and I definitely felt that it was worth the watch, along with the time I invested into viewing it.