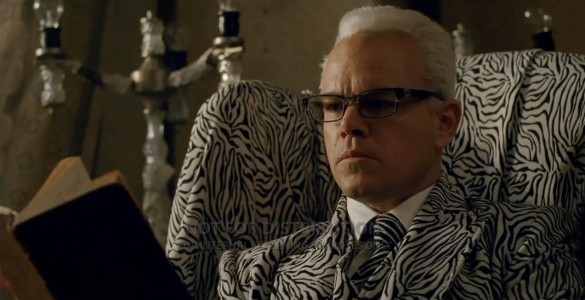 Synopsis: A computer hacker whose goal is to discover the reason for human existence continually finds his work interrupted thanks to the Management; namely, they send a teenager and lusty love interest to distract him.

DIRECTION
Terry Gilliam’s The Zero Theorem is a bit familiar with a Brazil-like aesthetic, a character working at a job with a “big brother” figure watching over him and technology once again at the forefront. The world Gilliam creates is still compelling as ever with intriguing settings and bright colors that give environment a lot of life. However, at the same time, it’s dark and constricted, which plays into the Qohen character well and sets the tone of the film. The film does become a little dull in the middle and even a bit self-indulgent, but for the most part, Gilliam offers another serviceable film featuring some fascinating themes that he explores in a way only Gilliam can.

SCRIPT
Qohen is working at a mundane job, is looking for something more and is just wanting to be wanted. After a conversation with “Management”, he does get a new task of trying to break “The Zero Theorem”, which is something that seems impossible that no one has been able to accomplish. Admist trying to break the Zero Theorem, we see that Qohen struggles with loneliness and becomes distracted by fantasy, as well as frustration and seclusion. The story overall is a bit slow but builds within it’s themes while packing an emotional element that plays into those themes really well and allows for the characters to shine. The Zero Theorem itself is harrowing task for anyone and how Qohen deals with it is something that’s certainly relatable and compelling.

PERFORMANCES
Christoph Waltz doesn’t give the performance of his career, but he’s still really good here. His character of Qohen is someone who struggles with isolation and social situations, which Waltz plays wonderfully. His visual aesthetic is also interesting, as he has no hair on him, which adds to the emptiness of his character. The supporting characters are mostly minor and brief, but we get some interesting performances from Tilda Swinton, Matt Damon and Mélanie Thierry.

SCORE
George Fenton’s score is uniquely gorgeous. It ranges from harrowing to rock n roll to orchestral in a way that’s never distracting and actually works for the film in some really beautiful ways. Fenton’s score can easily be overlooked in a Gilliam world, where the bizarre characters and aesthetic takes the lead, but here it’s just as prominent in all the best ways.

FINAL THOUGHTS
The Zero Theorem raises some interesting questions and explores them in a way that’s fascinating, tough to watch at times and also emotional. The world is unique, the characters are bizarre and the story hits on a lot of the same themes we’ve seen from Gilliam before. This may not be his best work, but it’s still engaging and raises some provocative themes that easily carries this film as a good watch.