Movie Review (Sundance): ‘The World to Come’ is Familiar But Soaking in Atmosphere and Emotion 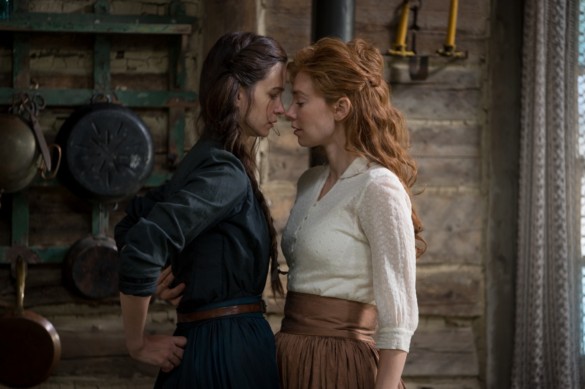 There has been a trend over the past year with the lesbian period piece dramas, particularly popularised after the critical love for Portrait of a Lady on Fire. Since then, we have also had the release of Ammonite, which seemed to come and go quite quickly, potentially due to the comparison and the lukewarm reception the film was given on review. Now, after premiering at Venice and coming over to Sundance, we are given another chance to enjoy the genre and connect with another lesbian relationship.

I do not want to make comparisons of the quality of this film with the others I just mentioned, but it is important to know that this film hits familiar beats. This is a story that has been told numerous times, staying safe and letting the characters drive the movie forward. It can feel quite repetitive at times, and it is easy to wish for more from this story. However, I ended up being pleasantly surprised by what the film had to offer despite the simple and repetitive narrative.

It is incredibly easy to connect to the relationship thanks to the two leading performances by Katherine Waterston and Vanessa Kirby. Both of these women not only sell their own roles and struggles throughout the film but the connection that they have for each other. For a film that is primarily focused on the blossoming relationship between each other, it is nice to see they have the connection that we see on screen. This is also built up with the smaller moments within the story, that helps sell their love for each other and adds charm to the film.

Director Mona Fastvold did a wonderful job directing this story and help to bring it to life. Whilst some people might find the film to be slow narratively, I actually found myself enjoying the pacing, allowing us to soak into the atmosphere and get swept away by the romance. The production and costume design stands out, and that is because of the other technical elements within the film. The color gradient could have washed the film out, and yet it instead made the film feel warm and cozy, particularly when inside with these characters.

Regardless if people enjoyed this film or not, there is one aspect that critics right now are universally agreeing on: the incredible score from Daniel Blumberg. A newcomer to the scene, it is hard to believe that The World to Come is the first feature film he has composed for. It could have been jarring, considering how distinctive and loud it is at certain points, but it only helps the film come to life. I already cannot wait for the soundtrack to be out, as I just want to listen to it over and over again.

There is one creative choice within the direction that I particularly did not like, and that is the voice-over narration that is used to transition between scenes. This is a classic example of a script that decides to tell, not show. I simply wished that the script would be more trusting of the audience and let us be truly immersed into the world, without the needing of interruptions to tell us what is going on.

This is a film that tells a familiar story and it is easy to question the need to tell this particular story. However, I was sold by the film by how much I enjoyed watching these characters come to life and seeing their relationship develop over time. This will not be a film for everyone, due to a few creative choices that are made to tell this story. However, whether it is the wonderful leading performances or the sensational score, there is something here for everyone to grasp onto and appreciate.