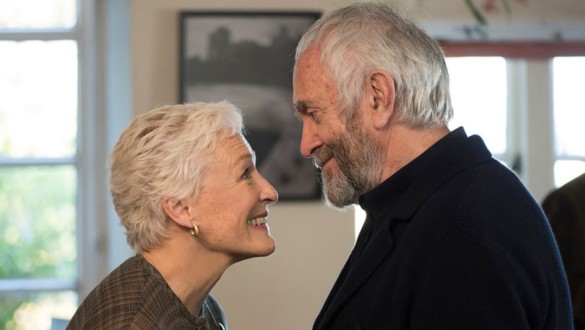 Synopsis: A wife questions her life choices as she travels to Stockholm with her husband, where he is slated to receive the Nobel Prize for Literature.

Björn Runge’s film The Wife superficially appears to be a taut drama skillfully acted by adept performers. However, once one digs a little deeper, this illusion quickly crumbles. The Wife, based on the novel by Meg Wolitzer centers on Joan Castleman (Glenn Close) as she travels to Stockholm with her husband, Joseph Castleman (Jonathan Pryce). In Sweden, Joseph is to be awarded the Nobel Prize in Literature for his brilliant body of work. Thrust into a new environment, the Castlemans begin to struggle in the unwavering spotlight. As the tension between the couple tightens, cracks begin to appear in their outwardly perfect lifestyle. Compiling the strained situation are a bothersome biographer (Christian Slater) and a whiny adult son (Max Irons) who continually add fuel to the fire by interjecting their loathsome agendas into the already loathsome circumstances.

Most importantly, the acting in this film is beyond reproach. Glenn Close shines as Joan, who struggles with her life as Joseph’s wife. Her performance reflects the wonder that is her ability and she incredibly holds this film up by herself in ways that are rare in contemporary film. Jonathan Pryce brims with swagger as the patriarchal Castleman, never losing a moment to come out of Ms. Close’s shadow and steal a scene or two. Yet with all this talent, these brilliant actors are forced to swim in a script that continually attempts to drown them. At every turn they act their way into situations and moments that never manufacture tension or interest. Their passion for their craft, especially that of Glenn Close, does shine through the murk of this film. However, that adeptness is not enough to save this dismal picture.

Acting aside, The Wife never hides its intentions from the audience. It completely forgets to keep its big twist clandestine. In fact, when the twist finally rears its ugly head, one becomes painfully aware that it arrives about 60 minutes too late. It is not just the twist that is hidden in plain sight; the scenes, the character interactions, and the dialogue flow with a predictability that would make any other film blush with supreme embarrassment. However, this film bounds on, seemingly ignorant of the contempt it is pushing on its viewers. Watching The Wife, one witnesses a story that continually insults the audience’s intelligence, while at the same time holding its plot up on a pedestal of brilliance. There is nothing worse than a film that takes itself so seriously, it is unaware of the fact that it is laughably failing at every frame. In no way does The Wife create tension that is not foreseen. In no way does The Wife allow the viewer to think for themselves. In no way does the The Wife take a step back and breathe on its own accord. The entire film is rigid and predictable, offering very little real drama. It’s as if the audience is being sold a Tiffany necklace, but instead are given a string of paperclips with a Tiffany price tag.

Regardless of whether you are looking for drama mixed with superb acting, The Wife is simply not the film to scratch that itch. It is a miscalculating, dreadful, and painfully boring way to spend one hundred minutes. For every ounce of flawless Glenn Close, there are pounds upon pounds of bad script. Ms. Close constantly struggles with an unwieldy story that relentlessly backs her into a corner. This film is perfect for a viewer that has never seen a real dramatic film. The Wife is a sheep in wolf’s clothing. It lacks both bark and bite.