Movie Review: ‘The Snowman’ is a stellar PSA on alcoholism 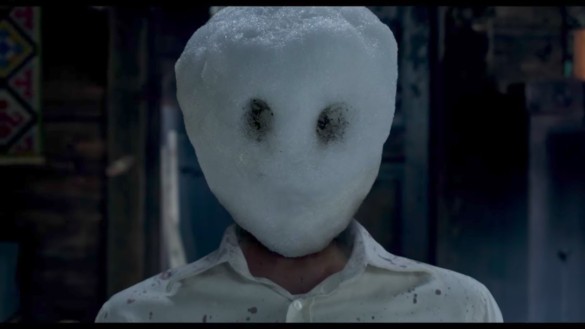 Synopsis: Detective Harry Hole investigates the disappearance of a woman whose pink scarf is found wrapped around an ominous-looking snowman.

At one point during the hunt for a serial killer who builds sinister Olafs after dicing his captives – all of them women – junior investigator Katrine Bratt (a dynamite, but wasted, Rebecca Ferguson) gives team leader Harry Hole (Michael Fassbender, also wasted) a shot of vodka. “Maybe this will help you get your balls back,” she said, not restraining her dismay at Hole’s inability to see – in her opinion – the obvious culprit. With a few “oooh’s” and a hushed “damn, she cold” in the audience, one would say no one registered the film’s right-there-and-then pointed statement on alcohol dependence.

Not just Hole – correct pronunciation is hoh-leh, but the film goes with Merriam-Webster’s first definition – is a walking liquor cabinet with droopy eyes and temper problem in The Snowman. Also fitting the description is another detective from a town away, Rafto (Val Kilmer), who is on a case with similar MO but took place nine years ago. And Rafto must have married to his poison way longer than Harry: His voice is dubbed by someone else, his skin is wax-like, and he despises birthday parties. Oh, alcohol, always rolling bundles of joy into pastures barren of it…

Actually, it seems like key players behind the camera are also hammered. No one would have thought a first-rate crew consisting executive producer Martin Scorsese, his trusty editor Thelma Schoonmaker, director Tomas Alfredson, and writers Peter Straughan, Hossein Amini and Søren Sveistrup would be so eager to shove The Snowman into the furnace, but that’s what happened. The latter trio bears the most fault considering a mystery lives or dies by its storyline. The source material is a best-seller, and yet Straughan, Amini and Sveistrup spend more time emulating another – the also-Scandinavia-set The Girl with the Dragon Tattoo – with subplots about an industrial magnate (J.K. Simmons, also wasted) co-running a prostitution ring with a doctor (David Dencik, also wasted) and Harry’s many attempts to reconnect with estranged wife Rakel (Charlotte Gainsbourg, also wasted) that are ultimately meaningless. And what is the purpose of one of the victims’ twin sister (both played by Chloe Sevigny, also wasted) again? Isn’t she or her twin, per the trailers, supposed to be chased by the killer and then caught in a trap? For the latter, one has to ask Alfredson, who recently admitted that 10 to 15 percent of the screenplay wasn’t filmed and that the editorial department became responsible for filling the gaps. Not sure if Schoonmaker drinks, but Alfredson is sure forcing her to reach for the bottle.

D.O.P. Dion Beebe seems to be the only one sober in The Snowman. Having the ability to see clearly does pay off, since for all its missteps the film remains a visual feast. Every frame effortlessly highlights the scenery’s soul-deadening coldness and helplessness, but the trait comes through clearest in the grim opener featuring an abused mother committing suicide while her son watches on. Additionally, Beebe also depicts unnerving voyeurism in a dreamily seductive way, imbuing much presence into the atmosphere that made Alfredson’s two previous efforts, Let the Right One In and Tinker, Tailor, Soldier, Spy, superb examples of mood creation.

Assuming in vino veritas is a legitimate concept, liquor is the best place to find out how Alfredson went from helming one modern horror classic and one delectable John Le Carré’s adaptation to this point. Hurts a lot, just by thinking about it, let alone doing so with a drink nearby. While The Snowman seems to have a few words about broken families, its more obvious lesson is don’t make a movie while alcohol is in the system.