Movie Review: ‘The Sisters Brothers’ is a surprisingly tender reflection on classic westerns and brotherly obligation 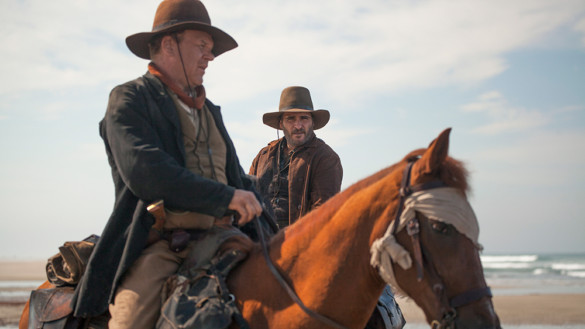 Synopsis: In 1850s Oregon, a gold prospector is chased by the infamous duo of assassins, the Sisters brothers.

The Sister Brothers is a film that both embraces its genre roots and transcends its genre shackles. While its title sounds more like a John C. Reilly collaboration with with Ferrell than a tender meditation on the implications of the sins of the father (amongst many other things), it is one with Joaquin Phoenix that manages to flip the Western on its head and creates a personality all its own. It is 2018’s version of Unforgiven with a biting wit and a touch of the fantastical. I can’t offer many more flattering comparisons than that. Instead of a reflection on a history of lonely violence in old age, it is a reflection on a mid-life crisis in the face of violence alongside one’s brother. It manages to indulge in the mundane and the hyper-quirky. The idea of brushing teeth has never felt more cathartic than it does in The Sisters Brothers. The film’s combination of period setting with contemporary sensibilities makes for one of the most unique theatrical experiences in recent memory. There is nothing about this film that isn’t transcendently good. John C. Reilly and Joaquin Phoenix give two of the best lead performances of the year, Jake Gyllenhaal and Riz Ahmed exercise maximum efficiency in roles that would be thankless in the hands of lesser performers and Jacques Audiard practices incredibly creative filmmaking in a genre that often gets bogged down in its own tropes. It is, as of the time of this writing, my favorite film of the year. It takes a special hand at the helm of a film to combine the humor, tension, pathos, and beauty of The Sisters Brothers. Jacques Audiard possesses that special hand.

The Sisters Brothers is the story of, you guessed it, the brothers Sisters, Charlie and Eli. As different as the two are, they have managed to become one of the most feared pairs of assassins in the West. They are tasked with obtaining a secret formula that shines a literal light on the gold that so many souls traveled West for in the 1850s from a rather unassuming chemist, Hermann Kermit Warm, played by Riz Ahmed. From the film’s first scene, it is clear that The Sisters Brothers accomplish whatever violent tasks are put in front of them with relative ease, in an exchange of bullets presented with a tremendously visually enthralling sequence that sucks the viewer in from the jump. We are thrown into the film with a series of flashes of light in the dead of night provided by the ignition of Old West pistols. It immediately establishes a sense of time and place. The implied violence of that early scene becomes increasingly more explicit as the film goes on, consistently upping the anxiety with each successive shootout.

Through that violence (and the actions they both take in the aftermath of that violence), we discover so much about the lives of our exceptionally complex protagonists. Eli resents Charlie in a myriad of ways, but he feels an obligation to continue their business for reasons we find out about over the course of the film. These revelations occur gradually but result in a series of moments in the film’s final act that show Eli display several exquisite releases of emotion that left me shaking with a sense of sadness and empathy. I cannot overstate how spectacular Reilly is in this role. His career began with great performances in films from the likes of Paul Thomas Anderson, Terrence Malick, and Martin Scorsese, but most modern audience members will only know him from the comedies that have occupied his filmography over the last decade-and-a-half. We will all be better off if he continues to tackle roles like, this that utilize his impeccable comedic timing as well as his sensitive doofiness.

Reilly and Phoenix represent two of the best actors when it comes to playing pathetic characters that you can’t help but root for. In films from Magnolia to Chicago to The Sisters Brothers, Reilly has shown an innate ability to make you feel for a man who lacks the self-confidence, for one reason or another, to be himself and reach out for his dreams. Phoenix, on the other hand, has proven to be an empathetic prick, capable of getting himself on your side no matter how insufferable he seems on the surface (films like The Master and Inherent Vice immediately spring to mind). More than any of his contemporaries, Phoenix is able to make his flaws endearing. He is not naturally charming, but he may be the most earnest actor we have.

In these two spectacular lead performances, we are able to see The Sisters Brothers through a precise lens that shows the Wild West in a light that dives into the opulence of Western expansion as much as the griminess that came with the lifestyle. At one point, the brothers stay in a hotel with (relatively) modern plumbing, which provides them with a heartfelt escape from their life of murder and resentment that provides an element most modern Westerns, no matter how subversive, fail to achieve.

Audiard shines in moments where the brothers are overwhelmed by either awe or exhaustion. His ability to show modern quandaries in the context of the Old West is uncanny. Despite being set over 150 years ago, The Sisters Brothers feels like a film made for all audiences. The grit of the era may not be entirely relevant to today’s audiences, but the ideas of brotherly obligation, capitalist inclinations and a helplessness in the face of the past are timeless. The film is as funny, violent, and gorgeous as the marketing would suggest, but nothing could have prepared me for how tender the film is. You will find no film this year that presents its characters with more respect and care than The Sisters Brothers. Like our own lives, the lives of Eli and Charlie Sisters teeter from hilarious to melodramatic without any warning. Like the best of the Coen Brothers, The Sisters Brothers manages to capture reality in a heightened narrative. Even when the film verges on the ridiculous, it feels true to life.

The plot of the film is unpredictable and the B-plot, featuring Gyllenhaal and Ahmed, provides a more grounded source of drama with a wonderful flourish of fantasy that makes the story, at times, feel like a fairy tale. Whenever this happens, though, we see a violent shootout or are transported to a saloon full of debauchery of all kinds. Audiard strips down the genre by showing the traditional portrayal of the Old West before pulling the carpet out from under the audience’s feet, showing the harsh realities of the era. There is a sense of wonder attached to scientific advances, a fascinating spin on a genre that has always indulged the majesty of nature.

Toothbrushes and fancy hotels represent an escape from the lives the Sisters Brothers have led, and that is the main thematic thrust. However, the brothers may simply be too ingrained in their life of murder to ever escape. Their pasts have compounded to create a mountain of bodies preventing them from finding love or freedom. Over time, Charlie and Eli both come to yearn for a new beginning and, for the first time, it seems possible. Each of brothers coming to this conclusion is treated with an inspiring amount of care. The characters always feel like themselves, even as their worldviews change. The events of the film build on each other to create moments of catharsis, pain, and heartbreak that moved me to my very core. It is a movie that works as a character study, Wild West adventure, and a unique coming-of-age film all at once. You will be hard-pressed to find a film that walks a thin emotional and narrative line as deftly as The Sisters Brothers.