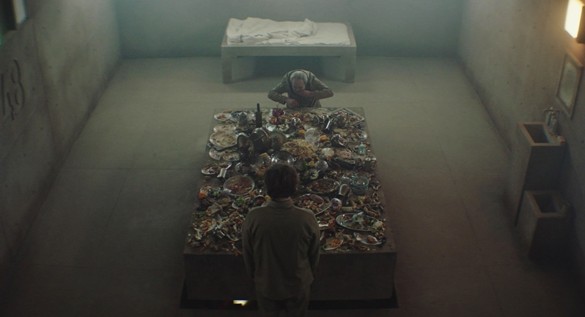 Synopsis: A vertical prison with one cell per level. Two people per cell. One only food platform and two minutes per day to feed from up to down. An endless nightmare trapped in The Hole.

It’s hard to write about Galder Gaztelu-Urrutia’s film The Platform without giving away any spoilers but I shall do my best. Perhaps the biggest challenge any film critic faces when writing a film review is trying to restrain themselves from delving too deeply into the film’s narrative and giving a detailed analysis which doesn’t spoil the film for the reader. The Platform is one of those films that once you have finished watching it then you instantly feel the need to discuss in great detail with others. It’s very rare nowadays that we have films which are so rich and dense in detail that you feel compelled to hunt someone who has also seen it in order to deconstruct it together and bounce theories off each other. If you are self-isolating right now (which you should be) then theorizing about The Platform will keep you very busy indeed.

The film is set in the world of a futuristic prison made up of hundreds of floors, there are two prisoners to each floor. Every day, a platform descends through a large hole in the middle of the building, and it’s the only chance for food for the entire day. On the upper levels, the prisoners have access to a feast of gourmet dishes, but people don’t ration for those on the levels below. As the platform gradually makes its way down each level the food quickly disappears. It’s completely random who your fellow inmate is and which level you land on. Every month the prisoners are moved to a new level which could see them end up on level 6, or level 36 or even level 176.

The film follows Goreng (Ivan Massagué), who wakes up on level 47 which means there’s still food on the platform when it makes its way down to him. Believe or not, he’s volunteered to enter the prison in order to quit smoking and gain a diploma. Georen thinks it will be a breeze, and brings a book (each inmate is allowed to bring one item with them). It’s clear that Georeng is out of his depth, and his first cellmate Trimagasi (Zorion Eguileor) shows him the ropes. Can Goreng survive ‘The Hole’ and can he rely on the kindness from other prisoners like Trimagasi, Imoguiri (Antonia San Juan), and Miharu (Alexandra Masangkay)? And, more importantly does Georeng have the stomach to survive on the lower levels?

The Platform has just dropped on Netflix, and it’s hard not to see the disturbing comparisons with the COVID-19 pandemic that is currently sweeping across the globe. Those who find themselves on the upper levels only care about themselves, and people tend to ignore anyone below them. It’s a dog eat dog world in the hole. It’s a very timely film, and in a lot of ways it’s a wake-up call that we need. Increasingly it feels that humanity, compassion and empathy for others is barely holding on a thread, and coupled with the COVID-19 outbreak, The Platform really puts a lot in perspective for you. Gaztelu-Urrutia, writers David Desola and Pedro Rivero, and cinematographer Jon D. Domínguez have created such an immersive world which has the look and atmosphere of our nightmares; this is the true embodiment of pure horror.

As you can imagine, The Platform is brutally and unflinchingly violent, especially when we reach the film’s climax which becomes a race to the bottom of the hole (don’t worry, I won’t spoil anything, but let’s just say things get very bloody and messy). Those who have a weak stomach may reach the midway point and find it all a little too much. However, if you stick with the gore then you will be fully satisfied with a wonderfully surreal ending which is left open to interpretation. Every actor gives their all here, however the best stand out performance by far is the hilarious Zorion Eguileor who steals each scene he is in. The film’s tone shifts dramatically towards the end, and it becomes a little too serious however, Eguileor keeps popping up in places to help ease the tension.

Overall, The Platform is a sophisticated horror sci-fi which will delight fans of Snowpiercer and the Saw franchise, but will probably be a hard watch for anyone who isn’t a fan of Dystopian horror films. The film premiered at the 2019 Toronto International Film Festival, where it won the People’s Choice Award for Midnight Madness, and it isn’t hard to see why it won. Visually appealing, with some excellent claustrophobia inducing camerawork, this well written film comes in at a lean 94 minutes in length. It’s a shame that the film isn’t just a little bit longer because The Platform leaves you craving more. A word of a warning: it’s probably best to go into this film on an empty stomach.