Movie Review: ‘The Night Eats The World’ is a standard offering to the Zombie genre 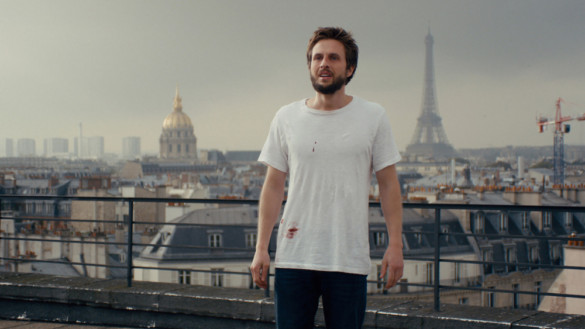 Synopsis: The morning after a party, a young man wakes up to find Paris invaded by zombies.

The zombie film sub-genre has had a bit of a lull recently. Aside from AMC’s The Walking Dead one might find it difficult to find good quality zombie cinema, although some may argue that even The Walking Dead has lost its appeal. However, there is hope on the horizon with trailers recently released for some new upcoming films such as I Think Were Alone Now which will star Game of Thrones‘ Peter Dinklage and the zombie musical Anna and the Apocalypse, both set to release later this year. Until then though there are a few random scattering of films that flew under the radar but can still satiate your appetite. The other night I finally got a chance to watch The Night Eats The World, a French film original titled La Nuit a Dévoré le Monde and director Dominique Rocher’s first feature-length film.

I will start by saying I was really looking forward to watching The Night Eats The World, I was very excited. The most recent zombie films I had seen were Cargo and Ravenous or Les Affamés, both films recently released on Netflix (I guess Netflix didn’t get the memo on the lull) and decent films but nothing compelling and both lacked that quality of dread and terror you might normally find in the genre. And with a World War Z sequel far out of sight and Zombieland 2 constantly stalled I knew there was going to be a long wait for anything from a major studio, so when I heard about this new French film and finally caught the trailer I couldn’t wait. Footage from the trailer reminded me a lot of the 2010 German film Rammbock with a similar setting and gritty feel, a film I greatly enjoyed so my hopes were high.

The film has a very familiar start. It begins by introducing our protagonist Sam played by Anders Danielsen Lie and offers us a bit of character development as we follow him around a house party thrown by his ex Fanny (Sigrid Bouaziz). There’s a history there with moments of tension and additionally it becomes clear that Sam is not fond of crowds, an element that takes shape later in the film. After more tension Fanny directs Sam to wait in a room far off in the house where he will be more comfortable alone and they can later have a chat. Sam makes his way there and soon falls asleep in a chair. Cut to the following morning. This storytelling technique is used often in zombie films and allows the audience to experience the new world at the same pace as the lead character who, as audience surrogate, wakes with no concept of what has occurred and is thrown unprepared into this chaotic world. When done properly this can make for a great start for a film and Rocher handles it fairly well. Sam steps out of the room and seeing the house a wreck and blood spattered about is immediately overcome with panic and fear and slowly learns the fate of Fanny and her house guests along with the rest of the outside world. The one complaint I would have about this opening is I found Sam adapting to the situation almost too quickly which is ironic because most zombie films have the opposite problem. Usually the characters require quite a bit of time to adjust and between this period make very simple mistakes and irrational decisions which can be frustrating at times to watch. Sam however encounters numerous threats right away and manages to narrowly escape each time with quick but accurate judgment. It is not jarring in any way but noticeable however I accepted this minor fault for the sake of getting the story in motion.

The next hour or so of the film is mainly spent watching Sam simply survive. The action on-screen ranges from Sam cleaning the complex he is stuck in clear of zombies to him scavenging for food and supplies and often to just him walking/sitting around in his own thoughts and emotions. With the exception of a few incidents the best description for a bulk of the film is ‘mundane’. Some films can fill the quiet and routine nature of everyday tasks with atmospheric emotion. Like watching a spider spin a web on some random BBC documentary, an ordinary and routine event but somehow witnessing it becomes almost a meditative experience. Some films can capture these moments in this way, instead the day-to-day survival of Sam feels basic and absolutely dull which in turn complicates making meaningful connections with his character. It is not totally uneventful however, there are some scenes that although short are brilliant and left my jaw on the floor. One scene early in the film involves a zombie swarm outside Sam’s window and the other is a gruesome attack that is very raw and brutal and is quite terrifying to watch. Again these are brief but Rocher captured them remarkably well and I wished there were more of them in the film. And though Sam is quite alone through most of the film he does encounter one other survivor, a young girl named Sarah played by Golshifteh Farahani. I will say without getting into details I did not particularly like her role in the film and felt her character could, and should, have been kept out of the final cut.

Of course with The Night Eats The World being a zombie film there is going to be the typical study on the nature of solitude and what loneliness and the lack of emotional feedback can do to the human psyche. Lie does well emoting how lonesome Sam is and just how heavy the seclusion and feelings of abandonment weigh him. There is a moment in the film where it is clear that Sam’s isolation has taken its toll and he acts out in a very dramatic fashion. The climax of this scene is meant to be juxtapose to Sam’s persona at the beginning of the film where its implied that he is a more solitary individual as he intentionally avoid contact with others at the party. It is definitely an interesting scene and one that will most stand out in the film.

The Night Eats The World has a few moments that will astonish and have you asking why you haven’t seen more of that in other zombie films. It also does a decent job of capturing Sam’s loneliness as well as his precarious mental state. But aside from those moments the going is very slow and unlike other films that manage to have a single character carry the film while keeping the audience engaged it becomes tedious not too far in. Additionally due to some ambiguity surrounding the passage of time and some scenes that seem to stretch out a bit too long the film makes it very difficult to keep your attention on the screen. I often found my mind wandering and more unfortunate when my attention would snap back to the film I got the impression there wasn’t much I missed. Still for zombie fans I would recommend it as a film worth watching, it may not wow you but it will at least prime you for what is coming down the line.