Movie Review: Jude Law and Carrie Coon Are Electrifying in ‘The Nest’ 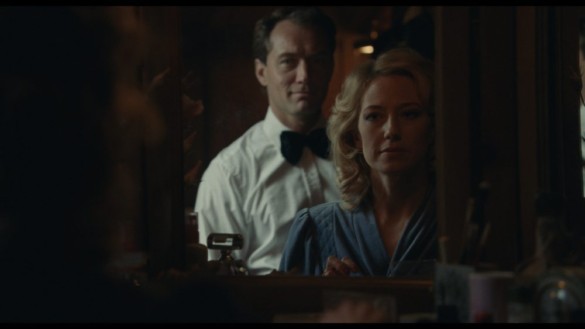 Synopsis: Life for an entrepreneur and his American family begin to take a twisted turn after moving into an English country manor.

The silent intensity, haunting questions, and lingering anxiety are all feelings that come from watching a Sean Durkin film. It’s been years since Durkin premiered Martha Marcy May Marlene, a gripping story of a woman acclimating to the life she once had after recently escaping a cult. So here we wait, with bated breath, as Durkin’s follow-up, The Nest, takes a look at a family whose lives are flooded with lies and deceit after an abrupt move to England.

Set in the mid-80s, The Nest follows the O’Haras — a family laced in perfection. The film begins with a tranquil shot of the O’Hara’s home. They have the luxury cars, the beautiful home, and all the other technological gadgets that would make any other 80s kid salivate. They have it all, or do they? Soon after our introduction, Rory (Jude Law), the patriarch of the family, awakens his wife Allison (Carrie Coon) to tell her that they have to move. An opportunity has come up for him to take a position as a commodities broker for a London firm. The Nest would be another examination of an upper-middle-class family being relocated for financial means if it ended here, but it wouldn’t be a Durkin film if that were the case.

There’s an air of mystery surrounding the O’Hara family. Rory is anything but a modest human being. Instead, he’s a man driven by his insatiable need to garner riches and success by any means necessary. He is always wanting is more money, more homes, more respect, leading to more power. Nothing satisfies Rory, as his compulsive lying flows out of his mouth like a poison. Allison refuses to play the dutiful 80s wife roll, as she can make a living as a horse instructor, and believes that his impulsive move is a bit suspicious. But like many women in the 80s, Allison is told by her mother that the husband makes the decisions and the wife has to accept it. As the family sets foot on UK soil, they begin to realize that the move is just the tip of the iceberg that will eventually cause them to drown in a sea of fabricated stories.

Law and Coon are electrifying as husband and wife — showcasing their talents through their explosive marital arguments. Rory’s overbearing demeanor is portrayed in such a way that only Law can achieve. Further down the rabbit hole of false allusions you go, as Law’s natural acting mannerisms peel away the layer upon layer of Rory’s façade. The Nest may follow Rory’s troubling behavior, but Coon carries the film from start to finish. Her performance as Allison is, to put it simply, fantastic! She methodically encapsulates the emotional rollercoaster that Allison can’t seem to remove herself from.

Durkin, along with the help of cinematographer Mátyás Erdély, creates an uncomfortable atmosphere — bleeding the lines between horror and drama. Behind the heavy wooden doors of the family’s mid-19th century mansion, there are dark secrets — blemishes on their public personas. Durkin’s voyeuristic approach gives the audience the ability to see what truly lies beneath this image of perfection. Several times throughout the film, Durkin shoots from the outside looking in, focusing on a window of a dimly lit room. And while the house is fully stocked with creaky floorboards and dark corners, the horrors of the film won’t come in the form of demonic possession, but rather the fears that the family is falling into their own personal nightmare as each one of them fails to grasp this new beginning fully.

The faults of The Nest is within its story or the lack of completion in the film’s final minutes. There are so many strands of plot at work within the film, but more often than not, the strands can’t come together to formulate a cohesive narrative by the end. The themes of materialism and false personas stick the landing, but the repercussions for these lies leaves you with a bitter taste in your mouth.

The Nest is a solid follow-up for Durkin, but in no way would I consider it to be better than Martha Marcy May Marlene. The Nest’s slow build-up may leave you craving more, but the fantastic performances from Law and Coon, and Durkin’s brilliant direction, will more than make up for it.