Movie Review: ‘The Meyerowitz Stories’ is a warm and moving tale of reconnection 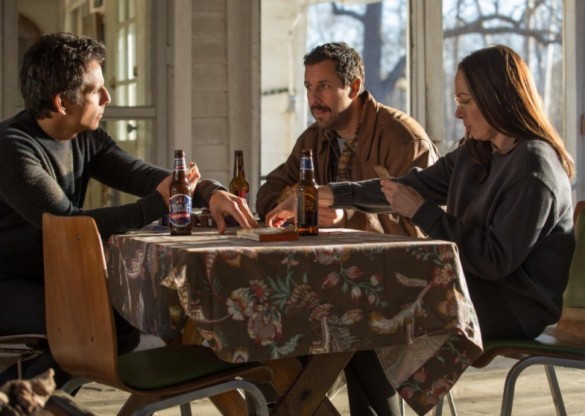 Synopsis: The adult children of Harold Meyerowitz reunite in New York in preparation for their father’s career retrospective.

The premise for Noah Baumbach’s latest outing are as straightforward as they come. Despite a crucial plot element being set forth in motion as we reach the finale of the second act, what you see is basically what you get. Although it doesn’t set any distinct precedents of wanting to exceed the classification of those films that are just one big keepsake of families reconnecting, it’s with the impeccable casting and performances that engages with the ideally adept script is where it differs to their advantage.

The Meyerowitz Stories is a hellish delight. It perfectly encapsulates the imperfections of a somewhat dysfunctional family but also just all families in general. Even though it’s following the entire Meyerowitz family attempting to grow closer, each individual family member each seem to have a problem attached to themselves in the film. Not only is it ample to see each investing character from multiple perspectives, but it’s surprisingly very beneficial to the movie later on. I suppose you can call it the climax but when it’s being narrowed down to the remaining revelations, the different stories and flaws presented with each character clash along with their emotions, which transpires in to something really bittersweet.

A movie so genuinely rich in dialogue like this has such a substantial amount of nuances ridden in the script. Especially because Noah Baumbach has the proficiency of knowing how to do it. For example, there’s a recurring theme of characters being cut off in mid-sentence when transitioning to a new scene. It starts with Sandler but slowly spreads to Stiller, Hoffman and the rest of the supporting cast. Although used for some comedic effect, it’s a subtle little ode to the ignorance and lack of patience that are part of our characters traits. Yeah, it could just be nothing, but I like to think it has more to do with the connection of our protagonists. It’s such a sharp-witted script but it’s definitely well candid to give you a good laugh from time to time—which’ll transfer in to the next topic perfectly.

The entire ensemble cast is easily one of the most impressive to be in a film this year. Adam Sandler and Ben Stiller both inflict such a certain degree of tenderness to their characters that is explored much farther down the line of the movie and when it is, it’s so incredibly moving. Sandler’s character is oddly reminiscent to his character in Punch-Drunk Love in terms of personality, but he ultimately brings his own style to the table. Even with Dustin Hoffman pushing 80 years of age, he has never been better. He treads in to such a deep path of Harold Meyerowitz that it truly shows the range he has as an actor. Even though he’s already proved that with his earlier work, it seems as though the people surrounding him are giving a performance outside of their ranges as well. The best part however is how truly interesting each character is. They’re all so idiosyncratic to the point where I couldn’t take my eyes off of the screen because everything that came out of their mouth was pure cinema.

The Meyerowitz Stories is such a delicate film. I say that because there’s just a minimal area that’s responsible for error. It’s possible some might find annoyance in the unconventional narrative but it’s something so minor, it’s hard to see it affecting your viewing of the film. The movie is just incapable of carrying any problems because of how much love and consideration this was put in to by Baumbach. Even with that said and with the overall lack of flaws, it’s objectively just not perfect. I just can’t bring myself to give it a perfect grade. However, it’s undoubtedly one of the best films of this year as of right now.

This isn’t the best way to sum it up and I really dislike using this phrase but, these are one of those movies that’ll sneak up on you. If you’re not expecting much or you have low expectations, that’s alright, but there’s a lot more to it than what’s on the bare surface. When it’s finally over, you feel as though you were part of this family and you were able to listen to them converse to each other all day. I really didn’t want it to end. Although it’s not perfect, it doesn’t need to be.