Movie Review: ‘The Many Saints of Newark’ is a Fantastic Return to the World of Blood and Gabagool 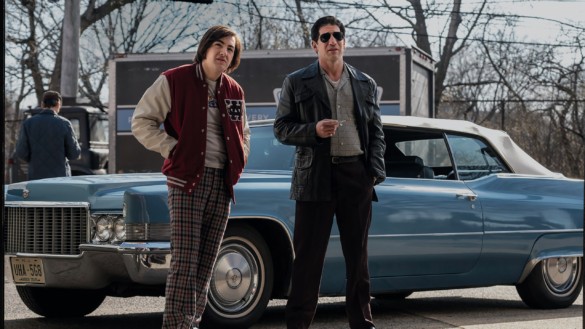 Synopsis: During the long summer of 1967, a race riot erupts in Newark as Dickie Moltisanti tries to steer his nephew Tony away from a life of crime.

It has been fourteen years now since the screen abruptly cut to black and left us all wondering at the fate of Tony Soprano. The rich world of the New Jersey based mob show The Sopranos created by David Chase was teeming with such memorable characters, such momentous events, and so many tragic outcomes that it has cemented itself as one of the greatest TV shows of all time – effectively becoming the lynchpin for the long-form American drama of the Golden Age of TV – and ensured it will remain enshrined in the memories of its legions of fans for a long, long time to come.

It makes perfect sense, then, that Chase would decide on a big screen follow up, a chance to revisit those irresistible characters and the high stakes lives they led. Any chance of a direct sequel though, and an answer to the question of whether Tony had been whacked by the New York mob, ended forever with the tragic passing of James Gandolfini in 2013, and so The Many Saints of Newark is not the movie some Sopranos fans might expect. Chase, no stranger to subverting expectations, has gone in a different direction, setting his tale during the Newark race riots of 1967. This allows for a new dimension to the Sopranos canon, with significant exposure given to the politics of race as well as featuring major Black characters for the first time.

Alongside this is the attention given to previously unseen characters, primarily Dickie Moltisanti (Alessandro Nivola), father of Soprano’s stalwart Christopher Moltisanti (played by Michael Imperioli, who makes a significant appearance here in a way that may either delight or annoy fans). Dickie was a character talked about many times during the Sopranos’ run, with his death providing an insight into the demons his son Christopher would later face, and here he is the main character (the name Moltisanti in English means “Many saints”, giving the movie one aspect of its title). Those expecting a bildungsroman for Tony Soprano – Breaking Bad style descent into criminality – may leave disappointed. Tony is only a peripheral character throughout, just slightly coming into focus in the latter half of the movie.

If you read that and felt disappointed, don’t be. David Chase has delivered a feature dripping with the same bloody consequences and moralism which made The Sopranos such a compelling show. While it may not concern itself too much with Tony – at least not until near the end -, Dickie more than makes up for this. His mercurial nature mirrors Tony’s own, and the constant battle he has within himself between his incandescent rage, self-loathing, and desire to be a good man will be very familiar to fans of the show. While Dickie constantly makes the kind of rash, terrifying decisions Tony was known for, he also shows a side of himself determined to do better as he seeks absolution from his father’s twin brother in prison.

The movie opens with Dickie meeting up with his elderly father “Hollywood” Dick Moltisanti (one of two roles played by Ray Liotta, giving his best performance in years). Hollywood Dick arrives home from Italy to show off his new and beautiful young Italian wife Guiseppina (Michela De Rossi), who has come to America with dreams of opening her own salon. Dickie inevitably finds himself attracted to Guiseppina and harbors a smoldering rage against Hollywood Dick for the dismissive, and violent, way he treats her. While Hollywood Dick sees the young woman as a trophy bride – carrying a picture of her to show his friends at parties, telling anyone who’ll listen about the “Miss Provolone 1967” – Dickie encourages her independence. His light touch with her stands in stark contrast to that of his father and underpins the Greek tragedy about to play out.

Meanwhile, Johnny Soprano (a tragically underused, but perfectly cast Jon Bernthal) is arrested and sentenced to five years in prison. His wife Livia (a pitch-perfect Vera Farmiga, channeling Nancy Marchand’s witheringly acidic persona from the show, with a drop of Edie Falco’s Carmella for good measure) asks Dickie to step in as a father figure for their young son Tony, whom, despite his intelligence and leadership ability, is flunking school and falling evermore into a life of crime. Dickie is struggling with the moral consequences of his own actions, however, and is afraid of being a bad influence on Tony. The best option would be for him to completely cut ties with the young Soprano, although we are already aware Dickie’s impending death will cast a pall over Tony’s life.

All of these events play out to the backdrop of the race riots which took place in Newark after two police officers hauled a Black taxi driver from his cab and beat him senseless. The inciting incident is shown again here, as well as the shocking aftermath which saw four days of violence and looting, culminating in the deaths of twenty-six people. While The Sopranos often tackled core issues such as race and misogyny, they had never done so quite like this: naked brutality and bloodshed as a result of systemic oppression rather than the broody mafioso hits we’ve come to know. It adds an extra layer especially as Dickie’s former associate Harold McBrayer (Leslie Odom, Jr) decides to turn against his friend and strike out on his own. As a Black man in a majority Italian neighborhood, McBrayer’s presence is always noticed. Jokes are cracked about plantations, casual beatings thrown at the slightest provocation. Dickie treats McBrayer like a friend on the surface but is still cautious not to let McBrayer stand too close to Guiseppina, and is prepared to drop him at a moment’s notice. It is clear their relationship is transactional, and Odom, Jr plays McBrayer with a latent rage that bubbles precariously to the surface.

The film shifts focus slightly when Tony comes of age. He is played now by Michael Gandolfini, and there’s a poetry in witnessing a son play the younger version of the character his father immortalized. The now teenaged Soprano has made a habit of bad behaviour: smoking, stealing ice cream trucks, starting an illegal betting shop in his school. Still, he’s kept out of arms reach of the main plot and hasn’t much to work with. Gandolfini is perfectly fine as young Tony but lacks the dark menace and sense of physical danger his father brought to the character. Young Tony might look a dead ringer for the Tony we know, but unfortunately, the similarities end there.

The stand-out performance belongs ultimately to Nivola. Dickie walks a fine line between the light-hearted, fun loving uncle whom Tony looks up to and the hardened killer who won’t hesitate to drown someone or place a drill bit between their teeth. It’s a line Nivola perfects. In every scene, he shows a duality to Dickie that is never less than totally compelling. Full of lingering stares and over-stated hand gestures, Nivola brings a naturality to his interactions with the other cast that bring his character to fully fleshed life and means the tragedy is all the more intense because of the connection we make with Dickie. While others – Farmiga as Livia, Liotta as Hollywood Dick, Corey Stall as the eternally nebbish Uncle Junior, and Billy Magnusson as Paulie Walnuts – do well with the parts they’re given, it is clearly Nivola’s show and he runs away with it.

It’s not all good news: while the plot beats are paced evenly at the beginning, by the time Tony comes of age the plot starts to spin too quickly. Perhaps it may have been better suited to a mini-series where we might have had more time to sit with Dickie as his world begins to collapse, but the story pivots onto Tony at exactly the wrong time and the audience then is shut-out of Dickie’s life at the most crucial moment. It’s frustrating and does a disservice to Tony, whom the audience may struggle to be invested in by the time he comes to the fore.

Chase has said he sees The Many Saints of Newark as a standalone experience which viewers can enjoy even if they haven’t seen The Sopranos, but this doesn’t exactly ring true. There are many, many Easter Eggs and ominous portends – most of which are about as subtle as a sledgehammer to a car window – which new audiences won’t get. Dickie’s newborn son Christopher is given to Tony to hold but immediately begins crying. Tony wonders aloud why the infant doesn’t like him, until someone suggests that babies are born with a knowledge of ‘things from the other side’. It’s a little too heavy-handed and cracks the veneer of Grecian Tragedy which it so handily set up.

Elsewhere, mainstay characters such as Big Pussy Bonpensiero and Jackie Aprile are given short-shrift while John Magaro overplays his role as Silvio almost to the point of caricature. Finally, the ending – clearly a nod to the ending of The Sopranos, which takes place in the exact same café – feels a little abrupt. Even after all these years Chase still hasn’t figured out how to finish a story.

The little things can be ignored though – especially if you’ve never seen the show – in favour of the truly stand out performances, specifically from Nivola, and the brilliantly executed thematic beats. Director Alan Taylor served as director on nine episodes of The Sopranos and keeps the visual style intact, with the added bonus of a soundtrack featuring various funk and jazz compilations. By the time the familiar rumble of the bass announces the arrival of the Alabama 3’s Woke Up This Morning as the credits roll, you’ll be reeling from new revelations planted by Chase which give extra meaning and context to the show. And if you’ve never seen it before…well, what are you waiting for?