Movie Review: The Limehouse Golem is flawed but quite delightful 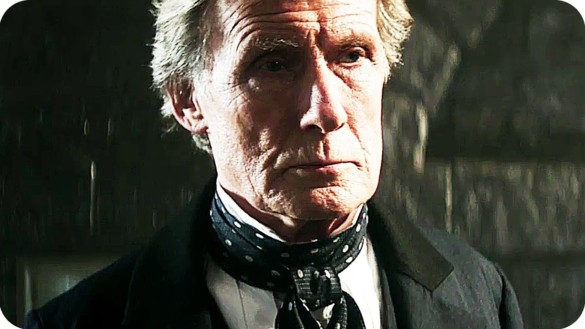 Synopsis: A series of murders has shaken the community to the point where people believe that only a legendary creature from dark times – the mythical so-called Golem – must be responsible.

Silhouette-strewn streets and shadowy passageways star in this English language debut for director Juan Carlos Medina, an at times intoxicating sense of time and place offering buoyancy to a plot at risk of floundering. Supported by a largely British cast, the narrative twists and turns at a rate not dissimilar from the music hall productions it depicts. And nimble it must be, for beneath the veneer of post-Dickensian London lurk an unfortunate smattering of miscues.

“Let us begin, my friends, at the end”, so are delivered The Limehouse Golem’s opening lines, playfully toying with the structural fluidity of proceedings. As the curtain draws back on 1880’s London we are immediately complicit in the film as much a work of theater as cinema. The London in question is one familiar to pop culture: of opium dens and medicinal laudanum, of prostitution and vagrancy. And into this ripe setting is Inspector John Kildare (Bill Nighy) plunged, the self-proclaimed Limehouse Golem murderer the object of his sleuthing. Paired with Constable George Flood (Daniel Mays), Kildare’s investigation soon leads him into the toxic company of a troupe of music hall performers led by pantomime dame, Dan Leno (Douglas Booth), a real-life theatre actor of the period. Told in flashback, our present concerned with Kildare’s pursuit of acquittal from a charge of spousal murder connected to the Golem at the feet of Lizzie Cree (Olivia Cooke), there’s a distinct sense of visual gluttony as we delve momentarily into each thread.

Then to the film’s overwhelming flaw: a final-act twist so telegraphed I needed the prompting of other screening attendees to perceive. From about forty minutes in the reveal is bellowing at you, a monolithic neon sign illuminating every clue under Inspector Kildare’s woefully inept scrutiny. The narrative’s attempts at diversion are timid, desperate for the conviction of its rich world-building. And it’s to the film’s credit that the dichotomy doesn’t betray the painterly pleasures of Medina’s Victorian London. Adapted from Peter Ackroyd’s novel, Dan Leno and the Limehouse Golem, the literary source does seem to be the preeminent format for this tale. Vibrant and deliciously tactile its realized world may be, but the one-sided nature of its formulaic, if spritely, unfolding leaves us craving an impossible degree of interaction; we are merely along for the ride rather than a remote contributor to the Kildare-Flood-viewer triumvirate.

Still, there is plenty to be enjoyed here. Of those on screen, Nighy in particular excels in the lead role, a role originally intended for the late Alan Rickman. It would be entirely possible for some performances to be stifled by the inevitable excesses of costumes and gesticulation; that this isn’t the case is praiseworthy. Minor plot points and (un)twisty ending aside, this is certainly worth your time. Fans of the source material might find an unexpected disconnect as they’re dragged into prison cells and out of crime scenes, but this feast for the senses more than justifies itself. All the world’s a bloody stage, indeed.