Movie Review: ‘The Kitchen’ is a disappointment 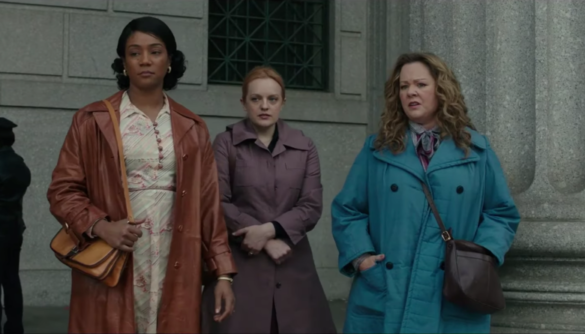 Synopsis: The wives of New York gangsters in Hell’s Kitchen in the 1970s continue to operate their husbands’ rackets after they’re locked up in prison.

The Kitchen is one of those films that had me excited to see it the minute I finished watching the first trailer. It is loosely based on a graphic novel of the same name. I made sure to read a bit of it before seeing the film. Unfortunately, this comic book adaptation did not work for me. It wasn’t bad, it wasn’t great, something just felt off. From what I read, it didn’t take much from the comics at all, but that’s not necessarily required. But in this case, I think the film should have kept to the comics plotline a bit more. I think this story had the potential to be a great crime drama, but would have been better served as a tv show or mini-series. The problems with the storytelling could easily be resolved by splitting up the plot into episodes. I hope this does get picked up or redone as a show, I’d be very interested in watching it.

The Kitchen tells the story of three women, wives of members of the Irish Mob in 1970s Hell’s Kitchen. After their husbands are sent to jail and they’re not given the promised financial support by the new guy in charge, the women band together and start running things themselves. Melissa McCarthy plays Kathy Brennan, a stay at home mom and the one who comes up with the idea to take over. Tiffany Haddish is Ruby O’Carroll, wife of the heir apparent of the Irish mob. Elisabeth Moss is battered wife Claire Walsh, who gains self-confidence and power while her abusive husband is behind bars. Even with the film’s story problems, this trio of strong women and their journey to power is one of the highlights of The Kitchen.

One of the questions I had going into this film was: Can Tiffany Haddish deliver in a serious role? Yes, yes, she can. I think the role of 70s housewife turned mob boss was perfect for her. I also think she should only be allowed to dress in 70s fashion from now on because she looked fabulous. (So did McCarthy and Moss, but no one can rock a jumpsuit like Haddish.) Moss gave the strongest performance in the film, followed closely by Domhnall Gleeson who plays hit man/Vietnam vet Gabriel O’Malley. Haddish and McCarthy were also great considering what they had to work with. I was pleasantly surprised with Haddish. She kept her usual over-the-top comedy in check, but we still got subdued moments of it to remind us of her comedic background. Other positives for me would be the costumes, makeup, soundtrack, and sets. From the minute the film started, you were transported back to the late 70s and it never faltered. I also noticed a lot of nods to other mobster films, and to current events at the time (even a jab at a millionaire’s son developing lots of real estate and not hiring union workers…)

My biggest complaint about the movie was the flow of the story. There were no discernable breaks in the plot to help move the story along. It just kept going and going and felt like nothing important was happening and then it was over. It had its moments of action, it wasn’t boring, but it just felt weird. It’s hard to describe. It was also a lot more violent than I was expecting. It definitely earned its R rating with more than language (don’t worry, there’s plenty of that too).

So overall, The Kitchen was a disappointment. It’s not enough like the comic to convince comic fans to see it, and it’s not good enough on its own to advise people to run to the theaters to see it either. I didn’t hate it; it definitely has some praise-worthy performances and entertaining moments in the story. But in general, it didn’t work. The wonky flow of the story killed most of the fun I had watching it. Thankfully its trio of magnificent leading ladies (and Domhnall Gleeson) made the trip to the theater worth it for me. I hope they realize what potential they had here and try it again as a tv show. Please Netflix, Amazon, HBO, anyone? Pick it up and give me a good adaptation of The Kitchen.