Movie Review: ‘The Killing of a Sacred Deer’; the kids are not alright 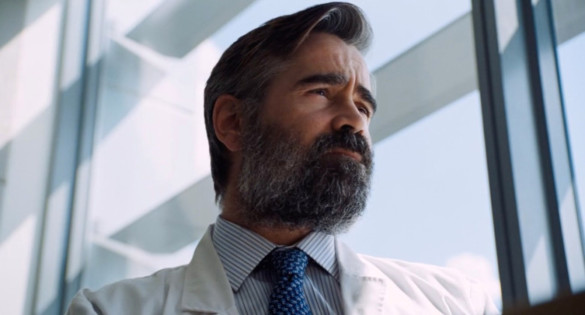 Synopsis: Steven, a charismatic surgeon, is forced to make an unthinkable sacrifice after his life starts to fall apart, when the behavior of a teenage boy he has taken under his wing turns sinister.

Yorgos Lanthimos arrived an apparently fully-formed filmmaker. His 2009 directorial debut, Dogtooth, swept the awards in his native Greece, and subsequent word-of-mouth advertising has seen his star rise on a trajectory not dissimilar from that of Denis Villeneuve, whose own critically lauded Incendies has launched a potential period of highly lucrative, artsy Hollywood dominance. Not that these filmmakers share much beyond their un-American origins; where Villeneuve might lay claim to Spielberg’s heir apparent, Lanthimos appears altogether more comfortable on the periphery, refusing to betray the distinctly European nature of his work. The Killing of a Sacred Deer is no different, and may even be his most assured film.

Colin Farrell and Nicole Kidman are Steven and Anna. Both successful doctors – she an ophthalmologist, he a cardiologist – their lives initially appear bliss incarnate: two over-achieving kids, a chocolate box home amidst bucolic splendor… perfection. Very early on, however, we’re introduced to Martin, a 16-year-old boy with whom Steven is holding secretive rendezvous and exchanging gifts. Martin, we soon learn, is the son of one of Steven’s patients, a patient who didn’t make it through surgery and may-or-may-not motivate nefarious stirrings in the teenage boy. To say much more of the plot would be a disservice to those who’re yet to see the film, suffice to say things take a dramatic turn for the Hitchcockian worse. The ensuing tension, of which there is excruciatingly much, of course plays out in a distinctly Lanthimosian manner. Those familiar with his past work, most notably the jet-blackly comic, almost robotic dialogue that permeates The Lobster, will be attune to this. And it’s in the writing that …Sacred Deer really excels. Without the screenplay’s ultimate ability to divert attention with a grin you’re trying desperately to suppress we’d be left with Michael Haneke’s Funny Games (A fine film, incidentally, but short on laughs).

A word on the brilliant score, which pairs an equally dissonant droning brass section with punctuating, Psycho-like piano. The menace, if it weren’t tangible enough, fills every empty space with real impact. Even moments we know and might ordinarily expect to be tough on imagery alone are peppered with these discordant rhythms. It’s painful. In a good way. A wonderful moment in which harmony briefly interjects in the shape of a choir rehearsal fails even to subdue the threat.

Like all his best work, Lanthimos has invited us into a world in which we’d rather not be but sadistically can’t deny. It’s interesting to think of what another director may have made of the script; would John Carpenter have had the patience to allow us to bathe in the uncomplimentary eeriness before he slays his deer? Probably not. But a defiant back has been turned on the orthodoxy, and we’re left with an absurdist domestic thriller that appalls, provokes, delights and, most importantly, energizes.