Movie Review: ‘The Intruder’ is a messy house invasion thriller 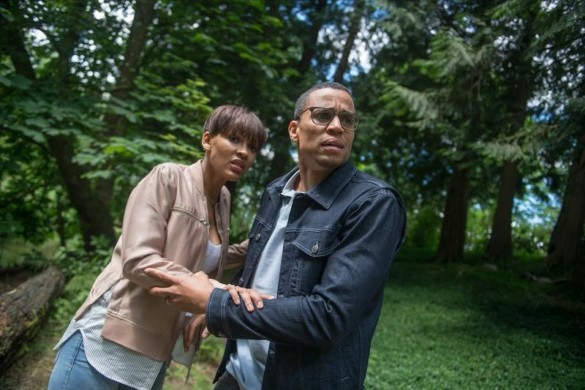 Synopsis: A young married couple buy a beautiful house on several acres of land only to find out that the man they bought it from refuses to let go of the property.

The Intruder tells the story of Annie (Meagan Good) and Scott Russell (Michael Ealy). A young couple, living in the city, with dreams of a big family house in the country. They find a house that seems to be the perfect fit, but right off the bat you feel something isn’t quite right with the previous owner Charlie (Dennis Quaid). Creepy feelings aside, they buy the house and move in right away. Scott works for a big marketing firm in the city and commutes, leaving his wife home alone most of the time. Instead of moving away, Charlie keeps showing up uninvited to do seemingly harmless things- like giving advice on how to maintain the house, mowing the lawn, etc, but what started out as a “harmless old man not ready to let go of his family home”, turns into something more sinister.

This movie was pretty much what I expected, an okay-ish thriller, but it was carried completely by a phenomenal performance by Dennis Quaid. Quaid’s performance is really the only thing worth talking about in this movie. I knew he was a decent actor, but I haven’t seen him in much where he isn’t playing the loveable dad figure. So to see Nick Parker from The Parent Trap, or Frank Sullivan from Frequency as a crazy, obsessed, creep-on-you-from-the-woods stalker, was mind blowing. I didn’t think he had that kind of role in him. Even though the rest of the film isn’t the greatest, it’s worth a watch just to see Dennis Quaid.

Michael Ealy plays Scott, the workaholic husband. He is generally unlikable, but called out Charlie’s inappropriate behavior early on, so I’ll give him points for that. Meagan Good is a bit better as housewife Annie, but she’s naive and too trusting. At one point she’s talking to Charlie outside and he asks if he can come in, the entire theater yelled “Nooo!” at her before she inevitably invited him in for a glass of wine. There were a few side characters, but they were mostly forgettable. The only memorable one was Scott’s obnoxious work buddy Mike (Joseph Sikora), and he was only memorable because everyone thought “I hope Dennis Quaid gets him first” anytime he was on screen.

My biggest issue with The Intruder is the story – it’s kind of all over the place. It starts off as a decent thriller, but then they kept adding in unnecessary twists and character drama that just muddled the main storyline. I wanted to like this movie, I’ll admit I liked some of it, but they ruined a good thing by trying to make it deeper or more complicated. They didn’t need all that. All you need for a good, watchable thriller is a main character(s) that you like or related to, a decent bad guy, some tension, and one good plot twist. I also felt like I had seen this movie before. In 2003 there was a movie called Cold Creek Manor, the synopsis on IMDB is: “A family relocates from the city to a dilapidated house in the country that was once a grand estate. As they begin renovations, they discover their new home harbors a secret and may not be completely free of its former inhabitant.” Sound familiar? It even stars Dennis Quaid as the new homeowner who just wants to live in his big house in peace. I haven’t seen Cold Creek Manor in 10+ years, so I don’t remember much other than it was also disappointing.

Overall, The Intruder was an okay watch. I don’t know if I’ll see it again, but I do recommend it if you’re interested in seeing Dennis Quaid in a villain role. I think with some editing this movie could have been a decent thriller, but ultimately it failed.