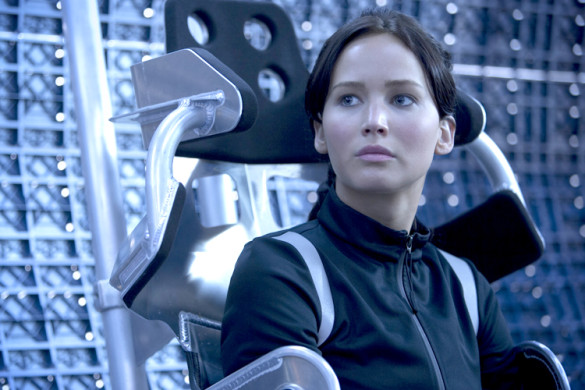 With Gary Ross stepping aside, Francis Lawrence takes over the director’s chair for what will certainly be a box office smash sequel that also attempts to continue to transform a cultural book phenomenon into Hollywood history. Ross certainly crafted up a respectable adaptation of the genesis of the Hunger Games Trilogy, but there were some flaws that made the movie slightly underwhelming, especially for casual moviegoers unfamiliar with the material. Lawrence has the advantage of working with established actors, characters, and crew members, not to mention an extra $50 million or so to increase the likelihood of this being not just a great movie, but a must-see globally cinematic event. The pressure of the director to deliver a satisfactory product when taking on such a universally-praised book and its characters is too great to cast into words, but departing a jam-packed theater last night, there were no moans or groans to overhear. The Hunger Games: Catching Fire is undoubtedly the result of hundreds of people who worked on the project, but it is especially noteworthy that Francis Lawrence was able to spearhead it with this level of precision. Having just finished the book hours before plopping down into a leather seat in one of Cinemark’s plush XD theaters, I felt as prepared as anyone to be critical of any missteps. It became quite hard to do that as the movie played out. From a direction standpoint, the most notable decisions were the handling of the fine lines of the story. More than a dozen times, our eyes are glued to the screen when a small detail that only readers of the series will be aware of is woven into a shot with such precision that it slides right by the casual viewer but intentionally catching the eyes of the educated. To me, this ability to handle material is the mark of a director who is passionate about his work and is unlike directors who view blockbusters as mindless entertainment.

Here lies the greatest strength of this film. When Gary Ross left the project, so did screenwriter Simon Beaufoy. However, Lionsgate hired Michael Arndt who has previous writing credits such as Little Miss Sunshine, Toy Story 3, and Brave (how’s that for familiarity?). I’d be interested to know how much of Beaufoy’s script was included in the re-write and final screenplay written by Arndt simply because Beaufoy possesses Oscar-winning talent when it comes to adapting popular novels (Slumdog Millionaire, 2008). It is rare to feel certain that a screenplay is actually an improvement upon a well-known story, but this one would be a much more mature, interesting read to me than the book was. That is not to downplay the novel’s brilliance which has captured the minds and hearts of many, but to acknowledge the choices to eliminate and shrink many of the scenes in the book relating to fashion and teen angst. It’s not just the curation of the novel, though, but the addition of several scenes that we can assume did occur in the novel, but weren’t made aware of being that the book reads from the perspective of our protagonist. If there are any criticisms of the script, it would involve blending and blurring the facts a little to make things move more quickly, but at 146 minutes that seemed quite appropriate. Overall, one of the year’s best scripts and certainly the best one for a predetermined blockbuster.

It’s never easy acting as a beloved character, so the fact that 95% of the time I felt like these actors were convincing says a lot. Jennifer Lawrence is very aware of the pressure of being Katniss and makes sure to include small pivotal character tendencies from the book. One example of this is when a poison mist sprays over her and the nervous system suffers from the effects. The way Lawrence moves during the shots following this event could not have been executed more exactly from page to book any better. Aside from Lawrence’s beauty and talent are a cast of great supporting actors and actresses, not the least of which are Woody Harrelson (Haymitch), Lenny Kravitz (Cinna), and the hilarious Elizabeth Banks (Effie). I’m still not sold on Josh Hutcherson’s Peeta, but he is acceptable. Philip Seymour Hoffman, Donald Sutherland, and Stanley Tucci add even more flare to the film, and the casting of Jena Malone as the mysterious Johanna Mason was spot-on. Of course, I wouldn’t be myself if I didn’t mention that Amanda Plummer (Yolanda/Honey Bunny in Pulp Fiction) was absolutely perfect for her role. Overall, this is the mixed, experienced, and fresh-feeling cast that a franchise needs.

With a soundtrack that includes Coldplay, Lorde, The Lumineers, and Imagine Dragons, there is a nice companion piece to be had alongside the movie. Not just that, though, since James Newton Howard scored the film. With 8 Oscar nominations for Best Score under his belt, Howard ensures an appropriate mood throughout different parts of the film. While nothing outstanding, this is what you’d expect–a blockbuster treatment.

Improving on the first movie in the series, The Hunger Games: Catching Fire demonstrates the ability to effectively translate a popular novel to the screen not only with justice but perhaps with improvement. It’s a good thing Lionsgate signed Francis Lawrence to finish out the series, as he will surely make this one of the biggest franchises in movie history. After the first film finished only behind The Avengers and The Dark Knight Rises at the box office in 2012, this time around The Hunger Games should be the highest-grossing film of the year. There’s no reason to skip this one.