Movie Review: Even with its passion, ‘The Greatest Showman’ just falls short 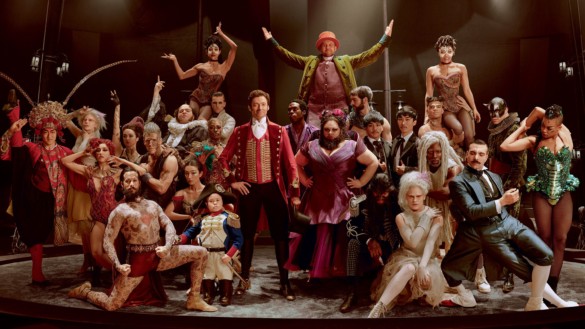 Synopsis: Inspired by the imagination of P.T. Barnum, The Greatest Showman is an original musical that celebrates the birth of show business and tells of a visionary who rose from nothing to create a spectacle that became a worldwide sensation.

Even with the pervading social media marketing and it’s somewhat baffling three Golden Globe nominations, The Greatest Showman garnered a bit of a harsh welcoming in to this year’s crowded Oscar season. Perhaps signs point to it being “…that film that beat out The Big Sick,” in the Comedy/Musical category at the Globes. However, once more audiences are able to see the film and come to the realization that with its appealing nature in relation to colossal organizations like SAG, HFPA, or even The Academy, they’ll see it’s ideal family-fun bait for awards voters.

The Greatest Showman could’ve came out 3-4 years ago and would’ve still delivered the same minuscule impact it had commercially and critically. And despite its undertone of musical schlock, I’m not going to ignore the delight that’s to be found in it. In terms of historical accuracy or even an authenticated depiction of one of the true greatest showmen of our existence, P.T Barnum—played wonderfully by Hugh Jackman—there’s an obvious lack of depth. However this is not to be blamed on Jackman or any other supporting actors like Michelle Williams or Zac Efron and Zendaya. It just never quite establishes a clear focal point and as the third act draws near, everything shifts out of focus. Basically transitioning between storylines and/or musical numbers, the scatterbrained themes and narrative are off putting when being frank.

The true secret weapon that keeps this from being a horrendous dumpster fire is the capability of having the composers from La La Land on their roster. It shares the compassion and sing/dance along factor that the latter did so well and then some, including the familiar voices from Hugh Jackman and Zac Efron as well as new musical greenhorns like Michelle Williams. The terrain it’s exploring is nothing shallow of old but the way they ostentatiously portray the jubilation of these “different” people is unmatched. Alternatively, having that be your secret weapon and strongest suit for a musical is the perfect stepping stone to construct around, but when there’s no regard taken for the characters you’ve built then what’s the point? Indeed the most frustrating component of this is well, that. To see a film boast the glorious and over-saturated euphoria reminiscent to classic musicals only to reveal a plethora of one-dimensional characters and transient story arcs is needless to say, disappointing.

I had slightly brushed over the flourishes of Hugh Jackman and his supporting cast, but don’t be in dismay now as there’s no misinterpretation here. The synergy amongst the top billed characters burns through every dedicated frame or musical number. It’s kind of grateful to see such diversity in a distinct film such as this one but it’s pleads aren’t meant to satisfy the media or the studio. It’s not effortlessly shoehorned in which makes it ingenious in its own right. I’d look forward to a collaboration between these actors if they’d be able to work with one another again.

As mentioned in the opening, I’d hope most agree that the film supported some of the most copious marketing when reflecting on any other projects entirety from this year. Even with the abundant trailers, TV spots, social media banners, and even Amazon box packaging (what?!), they’re scrambling to a dead end. Having their central demographic target families during the holiday season only administers an insurmountable lack of income. Especially because of all the competition it has from previous weeks to its current release week. It couldn’t have picked a worse time to come out, yet I can’t necessarily blame the studio as they probably thought they were partaking in the correct move.

The Greatest Showman is heavily flawed, I wouldn’t even call it good, but there’s definitely pleasure to be found in the performances whether it be part of acting or singing. Even witnessing the unraveling of this extravagant circus come alive as ebulliently as it’s portrayed is worth admission if you decide to see it. Hopefully it won’t get completely lost in this year’s tremendous heap of films, but don’t expect it to be at the top either.