Movie Review: ‘The Death of Dick Long’ gets a little too weird 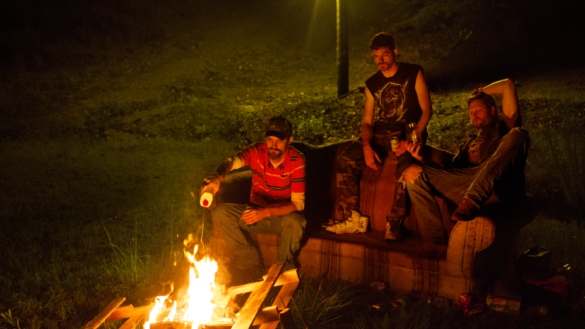 Synopsis: Dick died last night, and Zeke and Earl don’t want anybody finding out how. That’s too bad though, cause news travels fast in small-town Alabama.

When Earl Wyeth (Andre Hyland) poses this question to his best friend, Zeke Olsen (Michael Abbott Jr.), during the film’s opening scene, we don’t really think much of it. That opening scene shows them in their garage band together and then partaking in some stupid but harmless carousing. These are guys you might have known in high school. They haven’t grown up, and they don’t plan to. They’re just having a good time.

That good time gets shaken pretty quickly as the movie jolts into the inciting action of which its title speaks – the death of Dick Long (played by director Daniel Scheinert). Dick is another member in their band. We watch as Earl and Zeke drive frantically with Dick in the backseat. He is clearly maimed in some way. Their “plan” is to leave him outside the door of the local hospital. They do so, but not before dropping their already injured friend on the hard concrete. Still, they get away, and Dick is discovered by a doctor leaving his shift (played by the always wonderful Roy Wood Jr.). The remainder of the film will basically cover Earl and Zeke’s attempts to cover up exactly what happened that night.

For much of the film, we don’t even know what happened that night. We quickly learn that Dick has, in fact, died. It’s clear that Earl and Zeke know how Dick died, but they aren’t telling anyone. Much of the film’s humor comes from their ludicrous attempts to keep the lie going. There are even callbacks to Pulp Fiction (which gets namedropped) and Psycho, as the duo attempts to clean the backseat of Zeke’s blood-stained car and finally try to drive the car into a lake.

There are two other films that linger over this one. The first is Fargo, however the similarities to that Coen Brothers classic are only skin deep here. We do meet members of the local police department – Sheriff Spenser (Janelle Cochrane) and Officer Dudley (Sarah Baker). Baker, in particular, gives a fine performance as the initially bumbling officer who comes into her own on the biggest case this small town has seen in some time.

The second film I’d mention is Scheinert’s collaboration with Daniel Kwan, Swiss Army Man. That film shares the wild, zany, and sometimes off-putting sensibilities of this one. However, I much preferred that film for its heart and the “friendship” at its center.

This film decides to just go all-in on its weirdness. It’s the kind of decision that – I guess – should be recognized in a “Good for you for getting this film made” kind of way. The most daring decision here is to play the weirdness straight. I am referring most specifically to the moment where we find out exactly how Dick Long really died. This happens about halfway through the film. I’m not going to give away any spoilers, but Scheinert certainly follows Earl’s advice. Things get weird, but Scheinert just goes with it for the remainder of the film.

I want to go back to Fargo for a second. That film is one of the all-time greats precisely because it was able to successfully handle the balancing act between its homespun setting and characters and the pitch-black story it told. Scheinert tries to do a similar thing here, but the characters are not well-drawn enough to support the story, and the story itself isn’t really worth supporting.

On the characters, Earl was the more interesting of the two leads to me. He offers up some of the best laughs in the film. His pure stupidity is boundless, and Hyland plays it well. But as the film goes on, he has a much smaller portion of the screen time. We mostly watch as the storyline plays out in Zeke’s home with his wife, Lydia (Virginia Newcomb), and his daughter, Cythia (Poppy Cunningham). As I said before, Baker as Officer Dudley gives the best supporting performance in the film, too.

Maybe my biggest regret with this film is that there is an interesting theme to explore in this outlandishly weird story. Late in the film, the song “The Weight of Lies” by The Avett Brothers plays in the background. The chorus from that song is key to the story.

The weight of lies will bring you down
And follow you to every town, cause
Nothing happens here that doesn’t happen there
So when you run, make sure you run
To something and not away from, cause
Lies don’t need an aeroplane to chase you anywhere

But then the music that the film ends on is “How You Remind Me” by Nickelback. I definitely think the choice to end on Nickelback is an intentional one, and I think it’s emblematic of the film’s main issue – it is too enamored with the lesser parts of its story.

Because here you do have characters who have done something reprehensible (again, not giving away spoilers). It is so shame-inducing as to be almost unbelievable. At multiple points, they consider leaving town. They lie to cover it up. But the heart of the story is that “lies don’t need an aeroplane to chase you anywhere.”

I’m glad that an artist like Scheinert is able to get his work produced. There surely must be an audience for every story. I was a fan of his work on Swiss Army Man, and that film was certainly not without its own weirdness. But The Death of Dick Long takes the weirdness to another level, and I just simply wasn’t ready to get that weird.