Movie Review: ‘The Darkest Minds’ is sadly predictable and awkward 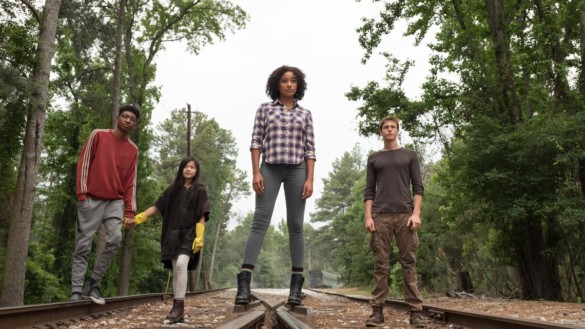 Synopsis: Imprisoned by an adult world that now fears everyone under 18, a group of teens form a resistance group to fight back and reclaim control of their future.

For a movie with “adults are scared of children” built into the premise, The Darkest Minds sure had a lot of different directions it could go regarding a social commentary, especially as members of Generation Z are in the midst of turning 18. Instead, it chose to go the predictable “rebellious teenagers find love in a hopeless place” route and totally missed the mark. That’s not to say it’s all bad, but it really could have been so much more.

I should probably admit that I have not read The Darkest Minds books by Alexandra Bracken. That said, this definitely felt like a case of the screenwriter (and likely the studio execs) trying to replicate the plot beat for beat without stopping to think what actually makes the books work. The pace is so breakneck with such an overemphasis on plot that you never really get a chance to breathe and figure out why any of it matters to the characters and, ultimately, the audience. The characters have little to no depth or arcs, the obligatory love story is shoehorned in with no genuine emotion behind it, and some of the most interesting exposition is unfortunately delivered through voiceover or, worse, awkward dialogue.

I’m not sure if the books hone in on the themes of generational divides and the youths of a nation changing the world in more precise and interesting ways (I’m betting they do), but the movie seems to completely lose its obvious message. Even worse, it manages to find a place for every bad teen movie cliche, from the forced love story to a shopping mall montage to the extravagant teenage party. If the script simply replaced some of those tropey scenes with character or theme explorations, this movie would have been infinitely stronger overall. But instead of a nuanced, socially relevant movie about teenagers overcoming adversity and changing the world, we end up with a hot mess of action set pieces, awkward teenage love, and stilted dialogue, including the most forced conversation about Harry Potter ever spoken aloud.

For all of these negatives, I have to admit that this movie was still mostly enjoyable, overall. It’s nowhere near as good as it’s obvious inspirations, like the X-Men or Hunger Games franchises, but the characters, despite the tropes and overemphasis on plot, are extremely likeable. This movie is also just visually appealing, from the stellar cinematography to the attention to detail of the set designs and props to the incredible special effects throughout. And while the acting is a bit of a mixed bag, this is easily the most diverse cast I’ve seen on screen in a long time. Despite the fact that the movie loses a lot of its message in the plot, there is something powerful about a story about a bunch of kids who all look different from each other and come from different backgrounds coming together to embrace their differences, discover their power, and take control of their own futures and, in turn, the future of the world.

The Darkest Minds is a movie I likely won’t recommend to many people. I enjoyed it but mainly because I’m a sucker for dystopian young adult fiction, and if you are, too, you might like this movie. I would also probably recommend it to most teenagers, but only if those teenagers have already seen movies like The Hunger Games quadrilogy, the X-Men franchise, or even the less well-received Ender’s Game. The Darkest Minds is not as bad as the current 19 percent Rotten Tomatoes score would lead you to believe (and I think the 80 percent audience score will attest to that), but there’s still a pecking order and when it comes to dystopian young adult fiction, this one just simply isn’t at the top.