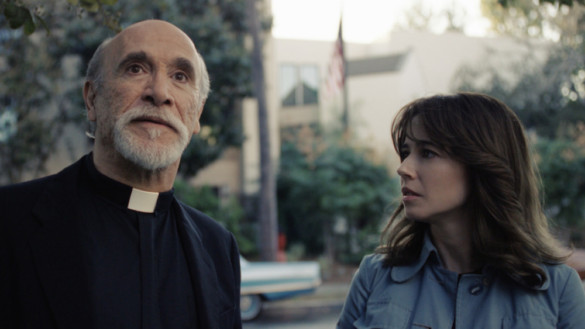 Synopsis: Ignoring the eerie warning of a troubled mother suspected of child endangerment, a social worker and her own small kids are soon drawn into a frightening supernatural realm.

The Curse of La Llorona is the latest film in “The Conjuring” universe. Other than a minor character connection, this movie is nothing like the previous films and I don’t personally believe it belongs with them. It just doesn’t have the same feel as its predecessors. It was a decent watch, but ultimately it did not live up to my expectations.

The Curse of La Llorona focuses on the Garcia family; recently widowed mom Anna (Linda Cardellini) and her two kids Chris (Roman Christou) and Samantha (Jaynee-Lynne Kinchen). Through her job as a social worker, Anna meets trouble single mom Patricia Alvarez (Patricia Velasquez). Patricia is very upset and won’t let anyone check on her two sons. When Anna is able to gain access to Patricia’s apartment, she finds the terrified Alvarez boys locked in a closet. Patricia and her kids are upset, saying they don’t want to leave because “she” will get them. The boys are removed from their mother’s care, placed in a temporary shelter, and this kicks off the supernatural craziness that is the rest of the movie.

La Llorona is the supernatural “bad guy” of the movie, she is a very common legend in Mexico and surrounding areas. The movie does use one of her common origin stories- Beautiful woman in poor town is discovered by rich guy, they get married, have some kids, he cheats, she goes temporarily insane and drowns her kids, after realizing what she has done drowns herself, then spends eternity searching for her children. She is a boogeyman of sorts, “If you don’t behave, La Llorona will come take you away”. Honestly, every other portrayal of her in tv shows or movies is better than this movie. The very first episode of Supernatural is about a “woman in white”, a ghost with similar origins to La Llorona. There’s an episode of Grimm called La Llorona (Season 2, episode 9). There’s a song in the movie Coco called “La Llorona”, and the two minutes of the movie where Mama Imelda and Ernesto de la Cruz sing it, is better than this movie. The Curse of La Llorona really relies on jump scares to make it a horror movie. I’m one of those weird people who takes notes while watching a movie so I can remember things, and I kept a tally of the jump scares and there were at least 20 in this film. That averages to one jump scare every 4.5 minutes! I love horror movies for their stories, and if you solely rely on jump scares to convince your audience it’s a horror film, you have failed at storytelling. There was also an attempt at comedic relief by the Curandero (shaman/witch doctor) Rafael (played by Raymond Cruz) that was awkward and didn’t sit well. They tried the same joke a few times and sometimes it worked, sometimes it really didn’t, so it felt overdone. The final complaint I have about the movie was La Llorona herself. She looked awful close up. She wasn’t scary, she was a bad mix of CG and makeup and it was extremely disappointing.

I know I said a lot of bad things about the film but there were a few things I liked. I thought Linda Cardellini was great as the mom. In the movie her kids watch the Scooby-Doo cartoon, which is funny because Cardellini played Velma in the live action versions they made in the early 2000’s. I loved the setting, the house or set they filmed in was very cool and looks really familiar. I also really liked Patricia Velasquez as the crazy, grief-stricken mother side character. I spent the entire movie trying to figure out where I knew her from (she’s Anck-Su-Namun in The Mummy (1999) with Brendan Fraser). They had a lack of music in places that helped build tension, that was a good break from the jump scares. There was a neat effect / jump scare with a clear umbrella. The movie succeeded in making me afraid of a new everyday object -which I think is secretly the goal of all horror movies – I’m now terrified of all flowy chiffon curtains or shower curtains, just that fabric in general. The movie also did not mess around with its scary bits, it starts right at the beginning and does not stop until the end. There is no half hour intro period like many horror movies. If you are interested, this movie takes place in 1973 so if you have the desire to watch these chronologically it goes: The Nun, Annabelle: Creation, Annabelle, The Conjuring, The Curse of La Llorona, The Conjuring 2.

To wrap up, this was not a good movie. It had its moments, but overall it was disappointing. I also had a terrible experience in the theater, so I might rewatch when this is available on Netflix or something. There was a group of loud, obnoxious teenagers behind me. They were screaming and talking the entire time. There were also children, actual 9 or 10 year-old children, in front. Why would some parent bring their kids to a night time showing of a horror movie, especially a horror movie where the primary victim/target is children?! Even though The Curse of La Llorona did not live up to my expectations, I am still willing to see whatever The Conjuring universe churns out next.