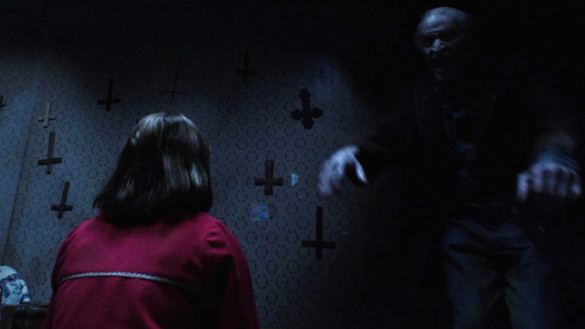 The Conjuring ended up being one of the better horror films about demonic possession that I have seen in awhile. Part of what made The Conjuring a successful horror film was the camera angles, and although you can tell when the scares were coming, James Wan still surprised us. The acting was great and the story was told beautifully. Can James Wan do it again with a follow-up? Well, the Insidious sequel may have been disappointing in the end, but The Conjuring 2 is a pulse-pounding 134 minutes that keeps you entertained the entire time.

The Conjuring 2 brings Ed and Lorraine Warren to London, England to investigate another incident regarding paranormal activity. The story follows single mother, Peggy Hodson (Frances O’Connor) and the supposed events surrounding her home, and in particular her youngest daughter Janet Hodgson (Madison Wolfe).

The 1973 classic film The Exorcist is still the best movie about demonic possession because, at the time of that release, filmmakers didn’t have the technology we do today to utilize cheap jump scares. The scares were done the old fashioned way with excellent writing and a sense of realism. I bring all this up because what you enjoyed about the first Conjuring film is different from the sequel, and in my opinion is better than the first. There are far fewer moments where people will jump. In fact, at the screening I attended, I do not recall anyone screaming as they did during the first one.

Having the setting shift to London might be a small difference to some but for me, I think it changed the whole dynamic of the film. The tight-knit community, modern style houses, and furniture (blended with the paranormal), makes for a more efficient scare than a typical setting in a rural area in the states. This same type of thing worked for the brilliant horror film The Witch. I’m not exactly sure what it is, but something about British accents and horror films seems to work. James Wan knows how to tackle genre and it’s because of that, I believe he will do an excellent job directing Aquaman.

In the 134 minutes, you would expect there to be more character development, but I think for this film the lack of character development works, because not knowing anything about this family makes the ride that much more enjoyable. The Conjuring 2 reuses the same elements from the first film (heightened sound effects, moving furniture, and dark corners) but add in the terrific acting of O’Connor and Wolfe, and you have a successful film that I highly recommend.