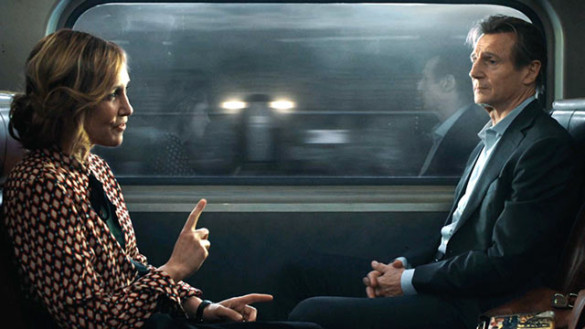 Synopsis: A businessman is caught up in a criminal conspiracy during his daily commute home.

What makes taking public transport tenser than usual? The stats on the news, flashbacks to Final Destination or Liam Neeson as a passenger? It’s the latter in the closer to director Jaume Collet-Serra’s Planes, Trains and Automobiles “trilogy,” and here the information is fashioned into a mindlessness-allowed exhibition of Irish-glazed badassery. Out of the three “installments,” The Commuter is the most elevated — and a win’s a win no matter how easy it is to overtake the competition.

The day has been grim for former NYPD detective turned insurance salesman Michael MacCauley (Neeson). With just one (cheese-rich) declaration from the boss, “poof” go his job, ability to pay bills and, possibly, peace at home if he stays mum about events transpired. After a few beers with his best pal, officer Alex Murphy (Patrick Wilson), Michael goes home, catching the train he’s no stranger to. Midway through John Steinbeck’s tale about angry berries, he is interrupted by a too-charming passenger, Joanna (Vera Farmiga, screen time bordering cameo), who says $100,000 will be his if he completes “one little thing” — find a passenger. The task isn’t as harmless as it sounds; failure will result in the deaths of Michael’s wife and son along with all other commuters.

The Commuter doesn’t run on the cerebral track that the teaser seems to suggest — Joanna’s literally distracting fashion and her mellow locution scream hypnosis — but that’s OK. The script from Byron Willinger, Philip de Blasi and Ryan Engle loves the ‘90s, so much so it goes IDGAF on the mind’s “(insert title of any actioner of the ‘90s) did it first” cries and makes everything feels at home. The supporting ensemble is, notably, most sold on the fact; everybody’s delivery has a prevalent “I’ll be damned if I can’t act like this” essence that it’s rather amusing to witness.

Taking a page from Non-Stop, The Commuter knows how to keep viewers distracted, tossing in a plausibility-straining scenario here, a wild framing trick there, and a burst of silliness right here. Does that ruin the matinee-worthy conspiracy-thriller guise the film sets out with? Hell yes, but there won’t be time to mind. As an aggressively visual filmmaker, no way does Collet-Serra let those acts of (needless) stylization out the door in a half-baked state despite being more fitting in a different film. Director Guy Ritchie will like those one-takes, or that shot where the camera glides through a ticket’s punched hole. And those sequences where the train is part of the action can definitely be inserts for Super 8: Chapter Two.

Don’t expect hearts to pound as much as they should have either regardless of how many symphonic bombs Roque Baños is setting off and how elaborate the action choreography can get. Similar to the rest of the director’s filmography, most of points of impact in the set-pieces have a touch of the artificial that, while adds beauty, sanitizes them. Usually, the touch comes in the form of wonky CGI. Full marks, however, should be given for keeping the trilogy’s aesthetics consistent; d.o.p. Paul Cameron lenses The Commuter, yet no kittens shall perish if Collet-Serra’s frequent collaborator, Flavio Labiano, is credited instead.

Shockingly, the film does have a solid emotional throughline. No, not because of the expositions about the oft-sidelined blue-collar society, but rather Neeson — a (meta-aware) sexagenarian, gray-templed and evidently creakier physicality Neeson. Though the Irish actor won’t hang his acting coat soon, it seems his “Bryan Mills Moment” has already passed. And history stuff is history stuff, even if it’s only minutes ago. That said, for someone who has the rare “age raises grace” gene, Neeson makes Michael a more sympathetic and clickable soul than the script demands, a warrior still worth rooting for when he stumbles into the Hudson Line’s fight club.