Movie Review: ‘The Christmas Chronicles’ is a family Christmas tale that leaves some to be desired 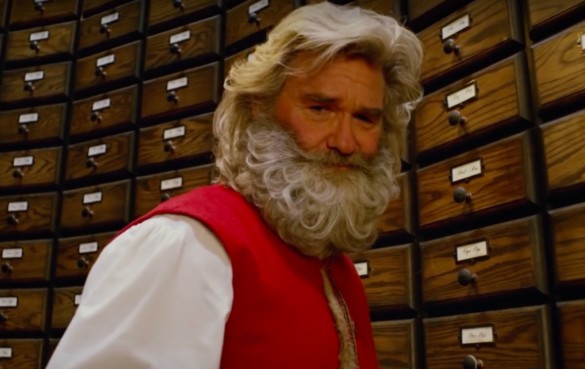 A favorite Christmas tradition of mine is when we are at my in-law’s house and we watch old home videos from when my wife was just a little girl. These videos are a window into another world – one where you see previous versions of the people you know and love. The videos are nostalgic, but they are also a gift to those of us who weren’t around to share the actual memories. We get to feel like we’re a part of it, if only for a little while.

The new Netflix holiday film, The Christmas Chronicles, begins with home videos like these. They introduce us to the Pierce’s – father, Doug (Oliver Hudson); mother, Claire (Kimberly Williams-Paisley); and their daughter, Kate (played by Kaitlyn Airdrie at the beginning and by Darby Camp for most of the film); and son, Teddy (played by Jesse Gervasi, David Kohlsmith, and Jack Bona at the beginning and Judah Lewis for most of the film).

At the outset of this review, let me say that I found the writing of the film to be suspect at best. Some of the character dialogue was blatantly included only for the purpose of reminding us about important plot points. For instance, after the opening family videos, we quickly learn that Doug has died. As the film continues, multiple characters make comments pointing out the fact that Doug is no longer with the family. It isn’t subtle, and it’s clear that it is only meant to raise the emotional stakes for us as the audience. I don’t think a family would really talk this way, especially around Christmas. Having said that, the film eventually gets to a place where it deals with the impact of losing a father, especially when it comes to Teddy’s character. But much of the dialogue along the way is wooden and blatantly expository.

Now that we have that out of the way, I must admit that The Christmas Chronicles is a fun, family film. For anyone looking to fire up a modern, Christmas tale that everyone can enjoy, this is sure to at least not ruffle any feathers. Kate and Teddy begin the film as distant siblings, but they are quickly sucked up into an adventure that they never would have dared to dream up. Before they know it, they are riding in Santa’s sleigh with the bearded man in red right there in the flesh. Just as quickly, they are the culprits behind Santa’s sleigh crashing, the presents being lost, Santa’s magic hat nowhere to be found, and Christmas in serious jeopardy.

One of the film’s highlights is Kurt Russell as Santa. The film goes to great lengths to differentiate this version of Old St. Nick from the ones you see on Christmas cards. He is not an old fat man, and he doesn’t seem to have much of a problem with bending the law a bit. But Russell imbues the character with that same ineffable magic that we all know and love.

My favorite character in the film is Kate. Yes, she is a common character in films such as this – the constant believer in the magic of Christmas. But Camp plays her well, and it is her performance upon which the film hinges. Teddy is like us – the cynic who believes by the end. But for thefilm to work, we need to see someone who has always believed. Kate is the true hero of the story.

Having said that, Teddy is certainly the character that takes the biggest journey. There is a moment at the end of the film when he opens his present that is the really the whole point of the film – belief not just in the magic of Christmas, but belief in ourselves too.

Elves and various other characters show up along the way as well. Many of them are not given much to do other than pop in for a few minutes and add to the fun. I was most disappointed in the way that Claire’s character was handled. As Kate and Teddy’s mother, you would hope she might play a bigger role, but the film gives her barely anything.

I guess that’s where the film ultimately falls short for me. Its message of belief in oneself is certainly a worthy one, especially when viewed in light of the trauma that the Pierce family has been through. But that belief must be reinforced by those around us. It happens in community, the most important of which is family. For anyone who has lost a family member, we obviously share Teddy’s wish that we will be able to speak to them again. But, unfortunately, it is just that – a dream. I thought that the film would do what so many of these films do and show how the magical tale brought the family closer. But this film doesn’t really do that. We see them opening presents at the end, and we see how Teddy now believes in himself, but we aren’t shown anything to make us think the Pierce family unit has changed much since the beginning of the film.

The film has moments of humor and light. While I could never shake my issues with the writing, even my analytical brain couldn’t help but get swept up in the story by the end (especially with help from a perfect cameo at the very end of the film). All in all, this is a fine Christmas film to watch with the family even if it is clear that the components of a much better film are there with a few loose threads just waiting to be tied up.