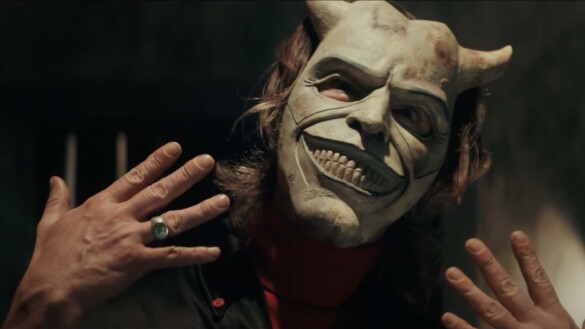 Synopsis: After being abducted by a child killer and locked in a soundproof basement, a 13-year-old boy starts receiving calls on a disconnected phone from the killer’s previous victims.

The Black Phone marks the third feature-length team-up between Writer C. Robert Cargill and Writer-Director Scott Derrickson. After parting ways with Marvel on Dr. Strange 2, The Black Phone became the project that kept these 2 horror nerds working together. This love letter to the 80’s abduction horror flick was born out of the creative passion for scaring, and to that end, The Black Phone is a triumph. It’s a true send-up of the 80s horror flick, with brilliant child performances, Americana vibes, and simple villainous characters.

Set in 1979 suburban Denver, The Black Phone is a tense tale of resilience and growth through impossible situations. As children begin to disappear, all of the suburbian neighborhoods begin to live in fear of “The Grabber.” Finney (Mason Thames) and Gwen (Madeleine McGraw) are two siblings living with an abusive, alcoholic father (Jeremy Davies), who wants nothing to do with the world. And when Gwen begins to have dreams of The Grabber (Ethan Hawke), her father scolds her for it. Finney doesn’t fare much better in this world, as he is too scared to stand up for his sister at home or to stand up to the bullies at school. Only when Finney gets abducted by The Grabber is he forced to fight for himself or succumb to dying alone in a basement with a black phone that seems inhabited by the spirits of those who died before him.

What Derrickson and Cargill’s script lacks in charisma, the brilliant cast brings in spades. Ethan Hawke fleshes out The Grabber into a ticking time bomb of nervous anxiety, and that tension is felt throughout the entire film. It’s the smallest gestures that make Hawke’s performance truly unnerving, as his mask keeps us emotionally distant from The Grabber. His haunting delivery of lines lacks any sort of temporal rhythm which accompanies the mask perfectly. It’s a ghostly, unexpected performance that will knock you off your rhythm at every opportunity.

But Ethan Hawke isn’t the star of this film; rather, newcomers Mason Thames and Madeleine McGraw steal the show as Finney and Gwen respectively. These two child actors are phenomenal, each bringing in the charisma and empathy required to get the audience to care about their plights. Thames brings to life a terrified Finney in every moment he can. Whether it’s through his screams for help, or his stiff emotional wall keeping others away, Thames never struggles to capture the mood and tone of this film. And McGraw plays off of this perfectly, giving Gwen the charisma and screen presence required to care about her. The moments of stupid courage or genuine fear and uncertainty that pertain to Gwen are furthered by her performance, and it elevates these simple characters to new heights.

However, what impresses me most about The Black Phone is the work of Patti Podesta. Her production design perfectly captures the essence of Americana suburbia. The outdoors feel expansive, inviting adventures around the neighborhood, while the indoors promise the reprieve of television and movies. A doll house isn’t just a toy, but a storage space for a young girl to store things she no longer uses regularly. In this world, toys, couches, bear cans and cluttered spaces provide a safety net from the terrors lurking around outside. But nothing is as truly terrifying as the empty room, a place that is both too large and too small simultaneously. There is no safety in a mattress lying on the floor, no hope in a phone that’s been disconnected for years. These are the elements of Podesta’s production that carry the most weight, being terrifying in their timeliness. Adding to this is the Grabber’s mask, built by Jason Baker. His talents shine through, as the mask’s shifting nature is yet another uncertain element constantly amping up the tension throughout the film.

Adding to all this is Mark Korven’s stellar score. Like every other facet of The Black Phone, it exists to pull you off the edge of your seat. Its unbalanced, synthesized tones are the shards of glass that keep you unsure of what may happen. It’s a score that doesn’t stay in one place too long, and its ever-changing, upbeat tempo juxtaposes the longer shot lengths perfectly.  However, there is a cost to creating this non-rhythm. While The Black Phone is a terrifying theatrical experience, its over-tightened story leaves a lot to be desired. 100 minutes breezes by with The Black Phone and not all of that is for the best.

To begin with, the structural editing is often extremely jarring, especially in the first act of this film. While jarring edits can be used to build tension and keep audiences from getting too comfortable; here, it contrasts heavily with the scenes that follow. The editing that occurs during any scene is often restrained and conventional, but it has a tight focus that keeps the tension palpable to the audience. This is juxtaposed with the loose structural editing pervasive throughout the first act. There are time jumps and scene changes that happen too quickly, giving little room for the audience to construct an idea of what is happening. And while this has an anxiety-inducing effect, it’s also jarring and occasionally hard to follow.

This is further enhanced by the second half of the film, which seems to have run out of time to develop the two subplots running concurrent to Finney’s abduction. Gwen’s character journey with spirituality and the supernatural is the larger subplot, but it isn’t given enough time to truly settle with the audience. The few scenes given to Gwen are amazing, largely due to McGraw’s screen presence, but they aren’t enough to make her journey mean something bigger. The supernatural events stick out as underdeveloped because of this. The other minor subplot has to do with the detectives on The Grabber case. They have the bare minimum of scenes, and thus the case appears to wrap up exceptionally quickly once we reach the third act. This subplot alone could have been a 90-minute film, so it’s astounding to me that it was kept to a handful of scenes.

There are a lot of smaller characters and character beats that are missing from The Black Phone. It’s a fast-moving movie, and it places a lot of emphasis on the abductee, and not those left behind. And for that, it’s a massive success for Derrickson and Cargill. It’s the type of horror movie we don’t see anymore; it’s a B-movie abduction flick centered in the 80s that values simplicity over complexity. And ultimately, The Black Phone is a theatrical experience that is sure to get your blood pumping.