Movie Review: ‘The Beach Bum’ is fun at its purest and most stoned 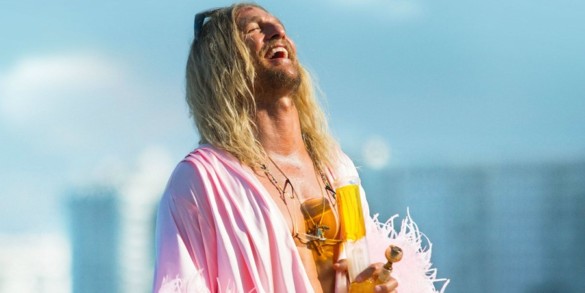 Synopsis: A rebellious stoner named Moondog lives life by his own rules.

As Harmony Korine stumbled on to the stage to introduce his first feature film in nearly 7 years, I couldn’t help but observe the manner in which he presented himself. He was so deliberately nonchalant—or more likely under the influence of alcohol or marijuana(something he’s been known to publicly do). He didn’t have any substantial foreword to delight the audience with for the curation of the film and often found himself tripping over his unrehearsed selection of words. What struck a chord was the finality of his preface, in which he emphasized the basis for this project was sparked upon the idea that the current world has been so subjected to increasing principles of hostility in society. Through this outing he felt inspired to display a creative experience stimulated by utter pleasure, women, boat captains, rastas, poetry, and a whole lot of Mary Jane as a buoyant distraction from all of the world’s present-day shortcomings. The Beach Bum does that with flying colors.

Korine has always been somewhat of a polarizing figure in the spectacle of underground directors through modern day entertainment and film. Breaking onto the scene penning the 1995 feature Kids, he followed up with his critically-loathed directorial debut Gummo two years later. It seemed as though Korine’s films were only getting more obscure and obscene as the years progressed. With each future release of a new project, the term “you either love it or you hate it” was being thrown around more abundantly and distinctly. Blending genres that resembled mumblecore yet also incorporating the fear of a grounded sense of dystopia in to a variety of his depictions and movies is where he found his filmmaking niche. The biggest contradictory to that statement is perhaps The Beach Bum itself, Korine’s most light-hearted film ever.

If there’s any conclusive achievement to be crowned to Korine for this brash experience of a movie is just how gratifying it felt to be apart of. The steadily suggestive and extreme humor grapples laughter from the viewer throughout each scenario. Especially the more unorthodox they begin to get. The only exception being one scene utilized as plot escalation and is in no way glorified or blatantly extended. Nevertheless, it’s nonstop in every meaning of the word and even manages to sustain the audience’s undivided attention. Credit to the insanely stacked and talented cast for another subdued victory as this on-screen, unequivocal, multifaceted entourage. Matthew McConaughey playing the vulgar Moondog, who hasn’t but one care in the world, is an irreverent stoner and poet who’ll have a stamp in this year’s pop culture and perhaps even years to come. Despite McConaughey’s exuberance as this character, the rest of the supporting cast lineup initiates a lot more of the films worth while occasions. Snoop Dogg, Isla Fisher, Stefania LaVie Owen, Zac Efron, Jonah Hill, Martin Lawrence, and Jimmy Buffett are all marvelously hilarious and crude in their own definitive ways. All of their on-screen interactions with Moondog and with one another feed off of their prowess as actors in reality. They don’t quite have the most ept screen-time but are portrayed with such an air of eccentricity that you reminisce on them once they make a momentary departure, hoping for a subsequent return.

It’s hard to believe something like The Beach Bum was so methodical from the jump of the gun. A film that spends the majority of its time loitering around and highlighting the quirks of the environment amongst the often facetious and amplified versions of its natives, emanates a feeling of improvisation. It’s through the sheer rowdiness of the plot advancement that leads to this assumption, yet everything is delicately scripted to a baked (quite literally) excellence. Throughout the day’s striking golden haze and the nightly effervescent skyline, the schemes of these wild-mannered citizens preserved in this carefree atmosphere are so accurately embellished that it seems as though they could be factual people. There’s more than likely people somewhere in the world that reflect the conduct of each of these characters. In other words, they’re all produced with such specificity that’s it easy to believe there’s a high probability of people that mirror this type of reasoning and lifestyle.

For a film that’s so self-indulgent in the outrageous bravado of having a good time, the film blossoms like a byproduct of Korine’s personal attitude. He’s even said it himself, he’s not exactly the most productive in the assembly of film’s compared to his fellow counterparts. The character of Moondog is so negligent through the work ethic of his poetry, that he only feels obligated to write during or after his episodes of intoxication. I’d like to believe that persona is a culmination of an over-exaggerated offspring of Korine. Not the excessive partying and drinking, but for a corresponding reality that links to him only wanting to direct a film if he really feels it. It’s definitely a subconscious identification that may or may not pin Moondog to himself. Or maybe I’ve just read too much in to it.

Those who despise Korine’s former endeavors or even those unfamiliar with his peculiar style will have complaints equipped as soon as the floodgates open. Even though it’ll be labeled as a shocking and pointless “thing” of repetitious muck with inexcusable stakes, I can understandably see where that point of reference stems from. Through all of the nihilistic amusement, the bubbly imagery of a Floridian haven, and the clouds of weed smoke, it does tend to linger around possibly longer than it should. Not to say I didn’t enjoy those extra occurrences of a poetically induced paradise, but it raises the question of how long you can continue an arc without changing directions and losing previously invested viewers. For that aspect I can discern it’s incoming criticisms, but in relation to the lack of substance; what did you expect? A deeper commentary (something like Spring Breakers) disguised in party soaked euphoria? The Beach Bum has no ulterior connotation other than what’s portrayed. And even then there’s no denying it’s grimy elegance.

As stated, one can already perceive the slew of insults and flack heading this films direction in a few weeks, yet it shouldn’t necessarily be accounted for. The Beach Bum is something so vile and provocative. You could use virtually any word from the English language to categorize this film based on perspective. It’s ignorant bliss that I applaud for it’s effort of never failing to boost a smile on my face—especially as I exited the auditorium. It’ll be unruly received by people far too extensively. However, it’s refreshing for anyone who’s down for an hour and a half of sinful debauchery and wholehearted stoner antics. Also always remember, sometimes you gotta go low to get high.